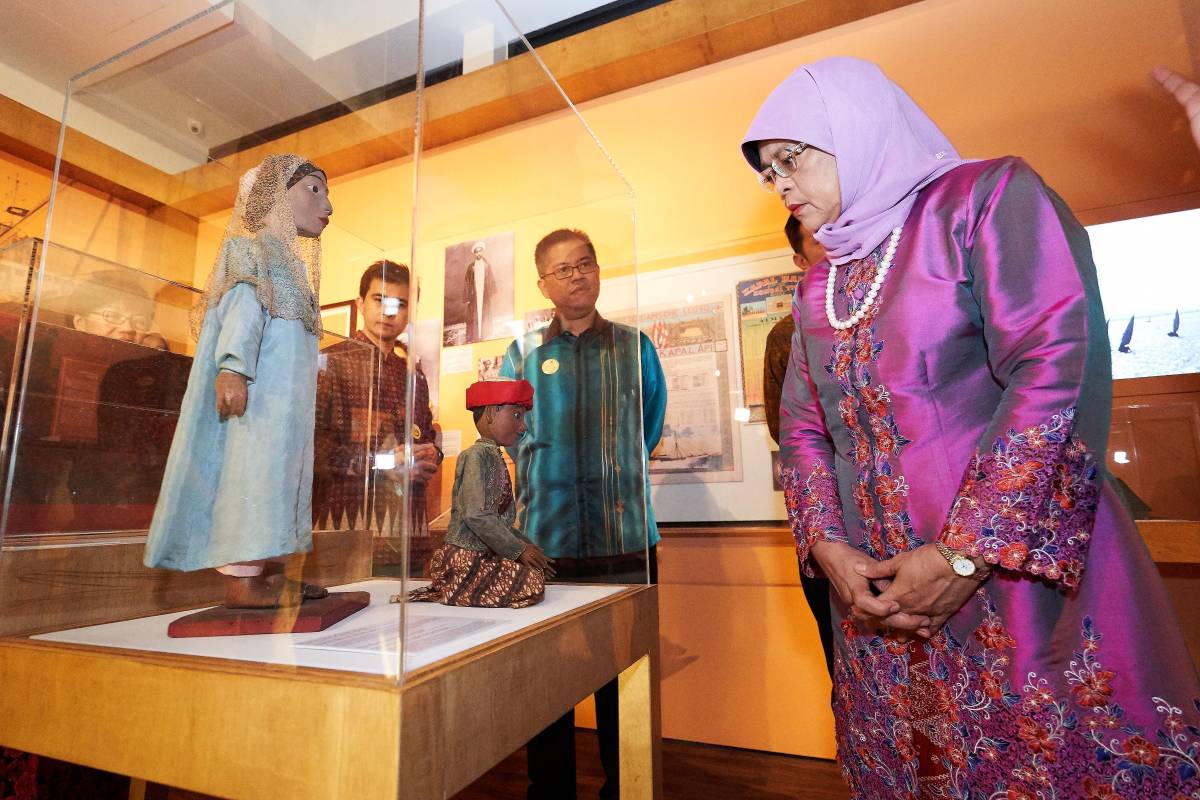 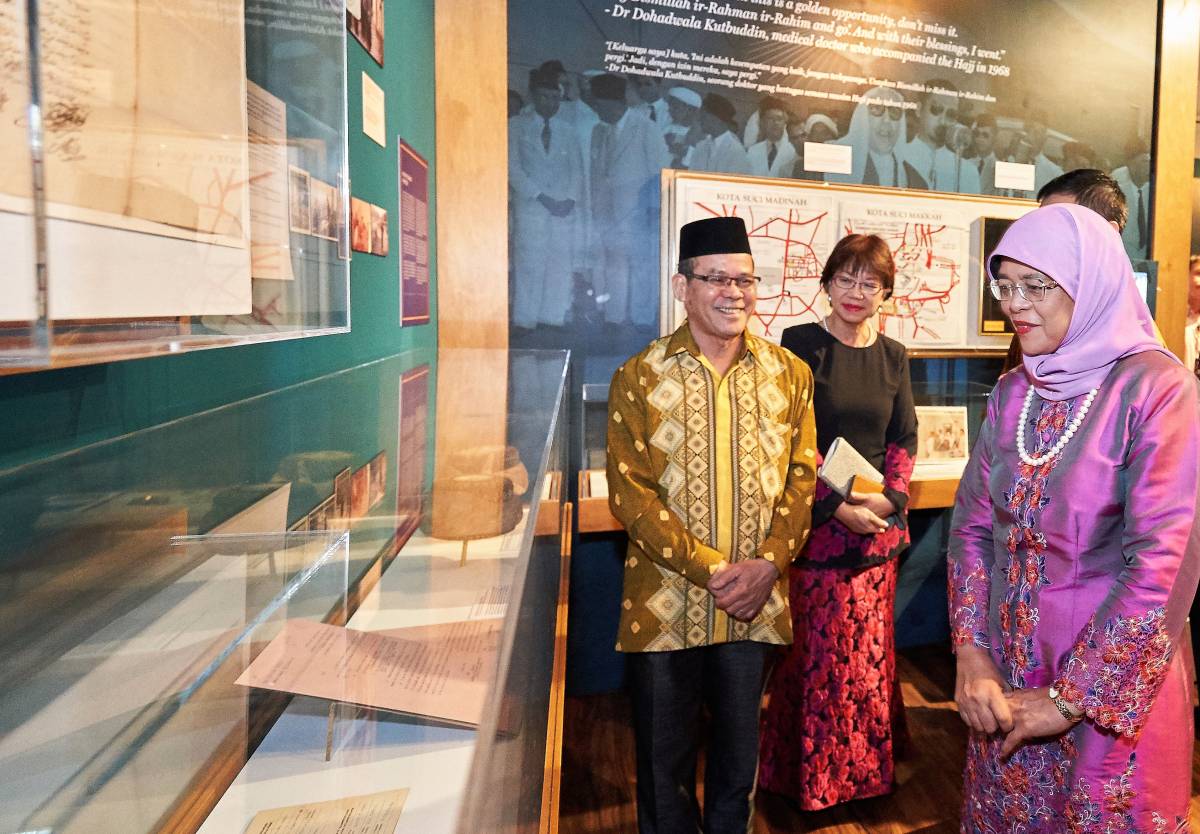 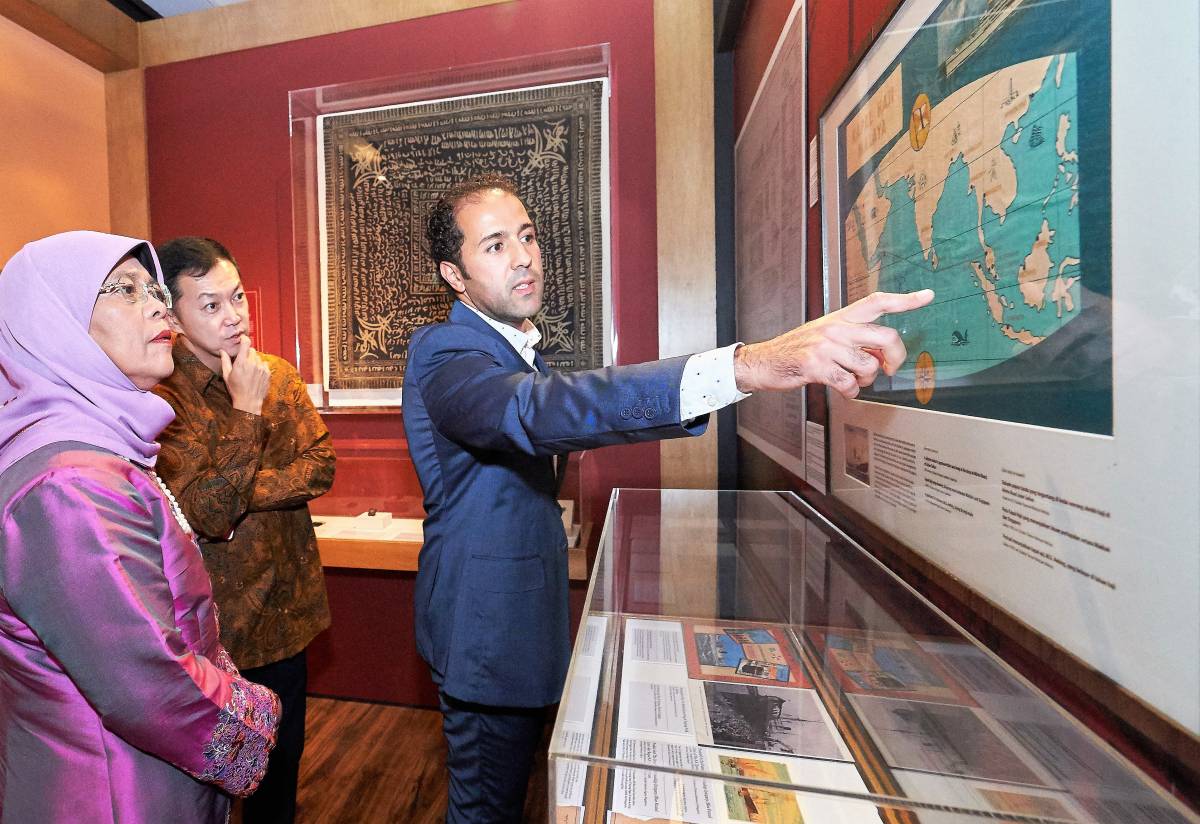 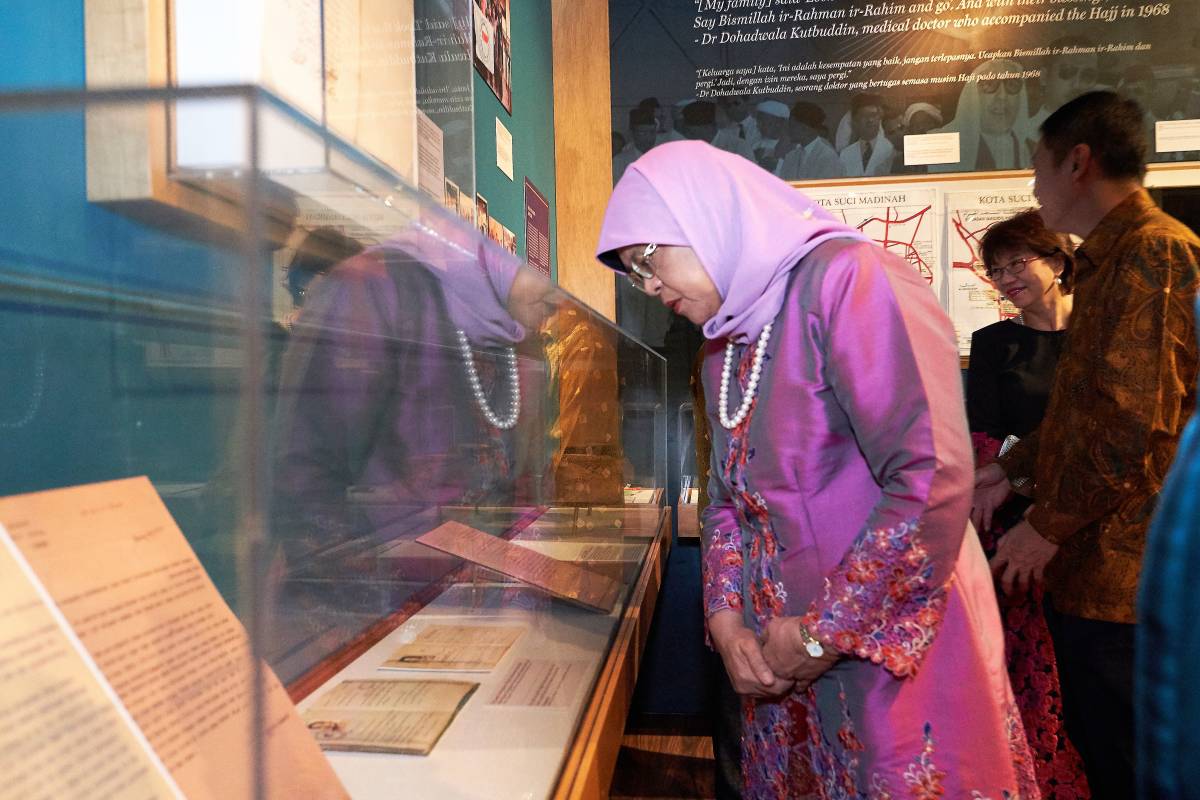 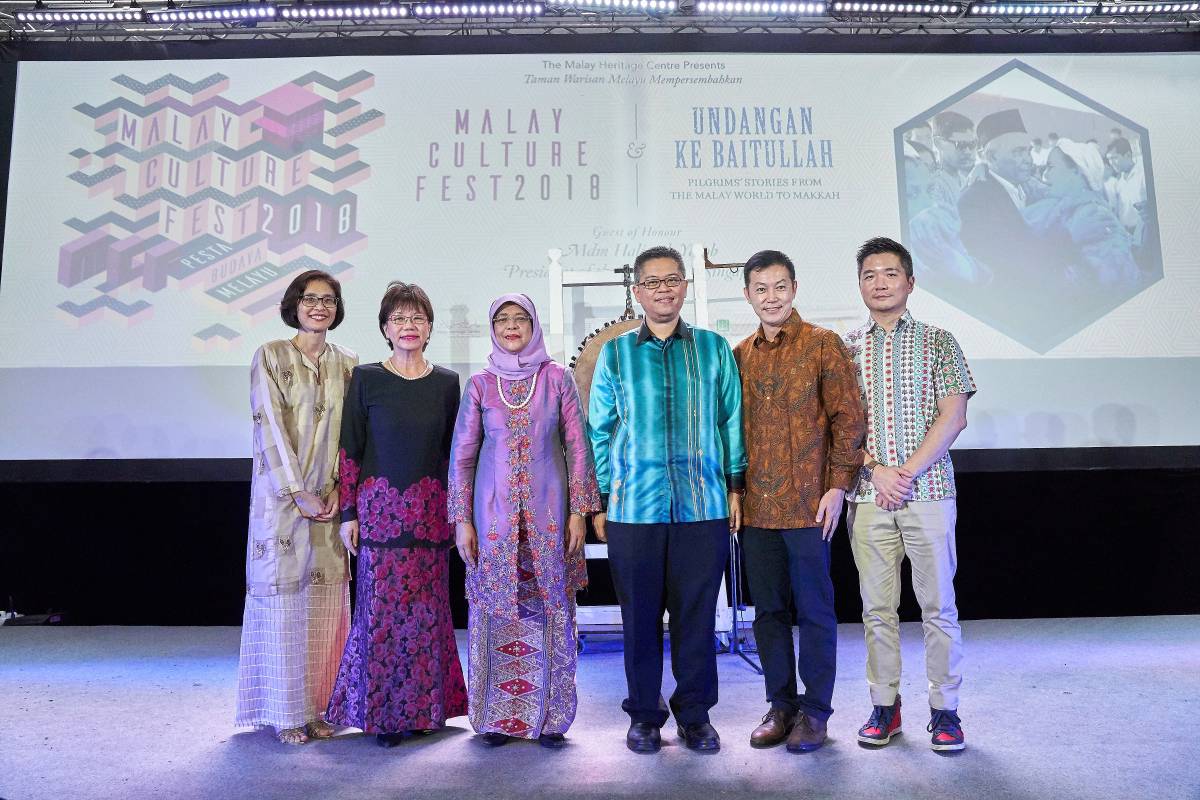 Singapore, 12 October 2018 – Every year, for close to a century – from the late 19th century up to the 1970s – thousands of Muslim pilgrims from across the Malay Archipelago would flock to Singapore’s very own Kampong Gelam, throwing the district into a bustling hive of activity. With heavy suitcases filled with pilgrimage goods in tow, they would board steamships granting them passage to the holy city of Mākkah, Saudi Arabia, more than 7,000 km away. There, they would be joined by millions of other Muslims from all over the world to perform the sacred duty of the Hajj.

As the pilgrimage hub in the region back then, Kampong Gelam was the centre for Hajj-related services, boasting pilgrim brokers, seasonal boarding houses, and shops selling sundries for the long journey. Today, with the proliferation of air travel, pilgrims no longer go through Kampong Gelam for the Hajj, but traces of this history live on in the precinct. For instance, the first Hajj utility belt, which is a money belt worn under the pilgrim’s robes to allow pilgrims to safely store their valuables whilst conducting the Hajj, was believed to have been invented in Kampong Gelam by Haji Yusoff bin Haji Mohammed Noor from Gedung Kuning, earning him the moniker “Haji Yusoff Tali Pinggang”. Similar belts are still sold and made in Kampong Gelam today, such as by Hajj belt maker V.S.S. Varusai Mohamed & Sons. Another example is Hajjah Maimunah Restaurant – a well-loved culinary destination among Singaporeans for its famed nasi padang – which is named after an important businesswoman who was Singapore’s first female sheikh haji (hajj broker), and also the first to offer catering services for Hajj pilgrims.

In recognition of Kampong Gelam as an important port town for pilgrims and their first stop in preparation for the Hajj, the Malay Heritage Centre (MHC) presents a new special exhibition titled Undangan ke Baitullah: Pilgrims’ Stories from the Malay World to Mākkah as well Malay CultureFest 2018, providing a rarely-told Southeast Asian perspective of the Hajj, and allowing visitors to learn more about this millennia-long tradition through personal accounts of pilgrims who have undertaken this spiritual journey.

Suhaili Osman, curator of MHC, shares, “Similar to pilgrimages of other religious traditions, the Hajj is an important part of the religious identity of the Malay community in Singapore, and roots us to Muslims around the world. The exhibition and festival provide a platform for us to share this part of the Malay-Muslim culture with people outside the Islamic faith, and allow them to reflect and draw parallels to their own expressions of faith.”

Retelling the Hajj Through Community Stories

The Hajj, or the pilgrimage to the Ka’bah in Mākkah – Islam’s holiest shrine, said to be erected by Prophet Ibrahim (or Abraham in Christian and Jewish traditions) – forms the fifth and last pillar of the Islamic faith. Practiced since 630 CE, the Hajj is a religious obligation for all Muslims who are physically and financially-able to make the trip. Since the late 20th century, in most cases, it is a once-in-a-lifetime journey for various reasons, the first being the limited number of Hajj visas issued annually – only 0.1% of each country’s Muslim population are issued with Hajj visas each year. These visas are issued to allow the government of Saudi Arabia to better manage the flow of pilgrims who come from all over the globe so as to reduce pressure on the infrastructure and services in the holy cities and sites, as well as at the various land and sea entry points into the country. The Hajj journey is also a long and arduous one, and one has to be in good health to embark on this pilgrimage. This was especially so in the past when the main mode of transport was by steamship, and the sea voyage was fraught with risks and dangers.

The exhibition, which happens from 13 October 2018 to 23 June 2019, builds on the MHC’s annual theme of Nilai (values). It documents the rich heritage of this time-honoured tradition through a collection of more than 160 artefacts, comprising items gathered from museum collections around the world, and personal belongings by families of pilgrims in Singapore who endured the arduous journey to Mākkah.

Spread across the two special exhibition galleries as well as the Finale Gallery of MHC, the collection provides a glimpse into the conduct of the Hajj from Singapore, Malaysia and Indonesia in the past before air travel became prevalent, and its evolution over the years. Highlights of the artefacts on display include a section of the kiswah – a richly ornamental textile decorated with Quranic verses that once draped the Ka’bah; a 1901 travel document issued by the Ottoman Consulate in Singapore to pilgrims and travellers looking to make the long journey to Mākkah; wooden models of hajjis and hajjahs (the honorific bestowed upon those who have completed the Hajj), which the Dutch colonial administrators used as a way to learn more about their colonial East Indies subjects; and the first iteration of a passport designed by the Dutch colonial government to control the movement of pilgrims to Mākkah.

Suhaili adds, “With Southeast Asia being home to the world’s largest population of Muslims, the practice of the Hajj has had a definite impact on the development of societies in the region, as pilgrims move between countries and exchange ideas and cultures along the way. By sharing stories of the Hajj, our exhibition hopes to provide visitors with another layer of understanding of Singapore, and our links to neighbours in the region and the rest of the world over the larger course of history.”

Apart from historical artefacts, the exhibition also features several contemporary art pieces, a commissioned film produced by local artist Adzlynn Fizrah Wan Faizal, and video interviews of the community which give a deeper understanding of the Hajj from various perspectives. This includes a pilgrim officer who has gone on the Hajj every year since 1985, and a female pilgrim who completed the Hajj when she was just 12 years old.

1MHC will also be presenting several programmes throughout the period of the exhibition to continue the discussion about the Hajj. This includes a lecture by prominent French academic Chamber-Loir, who will share more about oral histories and shared memories of the Hajj; an academic conference; community sharing sessions; and a Pilgrimage Intercommunity Talk where participants are welcome to talk about their own pilgrimage experiences across various faiths. More details of these programmes will be shared closer to date.

Malay CultureFest: An Immersive Showcase of the Expressions of Faith in the Malay World

To complement the exhibition’s focus, MHC is also anchoring the annual Malay CultureFest 2018 around the Hajj and other expressions of faith and devotion. The cultural celebration, spanning three weekends starting from 12 October, will feature a total of 16 immersive programmes including workshops as well as dance and theatre performances, providing visitors of all ages with an intimate understanding of the many expressions of faith in the Malay world.

MHC’s Programme Manager Jamal Mohamad says, “The focus for Malay CultureFest this year opens up exciting opportunities for people to learn more about how elements of faith and devotion are manifested in our intangible cultural heritage. Through various art forms such as dance and theatre, we hope that visitors can experience and enjoy the Malay community’s cultural heritage across the festival.”

Highlights of the festival include:

The festival’s opening piece featuring a specially commissioned multi-disciplinary performance comprising dance, music, and theatre, that tells the story of young couple who are embarking on the Hajj. Complemented by archival footage, the performance will follow the couple from their home to the port, and their journey on board the ship to Jeddah. To put together this piece, MHC worked closely with an ensemble group of performers including DIAN Dancers, Artistari Gentari, Projek Ujong Tanjong and Ikhwatul Iman Qasidah, featuring Azman Sharif and Nadiputra.

Lintas Nusantara, an annual collaborative dance festival featuring dancers and musicians from Singapore, Indonesia and Malaysia, who will present various dance forms from across the Malay world that are rooted in ritual worship or inspired by acts of devotion.

Nan Jombang Dance Company, a contemporary dance troupe from Padang, Indonesia, will also present a newly commissioned piece entitled Salam Diantara Sujud (In Between Invocations (Before I Kiss The Ground)) that explores the various meanings of devotion.

Young festival-goers can also join in the fun by taking part in the Heritage Hunt around Kampong Gelam. They can embark on a journey as young Hajj travellers, as they follow the footsteps of the Hajj pilgrims to learn more about the preparations prior to the long sea voyage. They will first start their “journey” with a visit to MHC’s special exhibition and permanent galleries to learn more about the Hajj and Kampong Gelam, and later extend their experience into the precinct and visit various shops such as Wahab Textiles that still sells Hajj supplies.

For more information about the festival programmes and the exhibition, please visit www.malayheritage.org.sg

The Launch of So Cantai Market