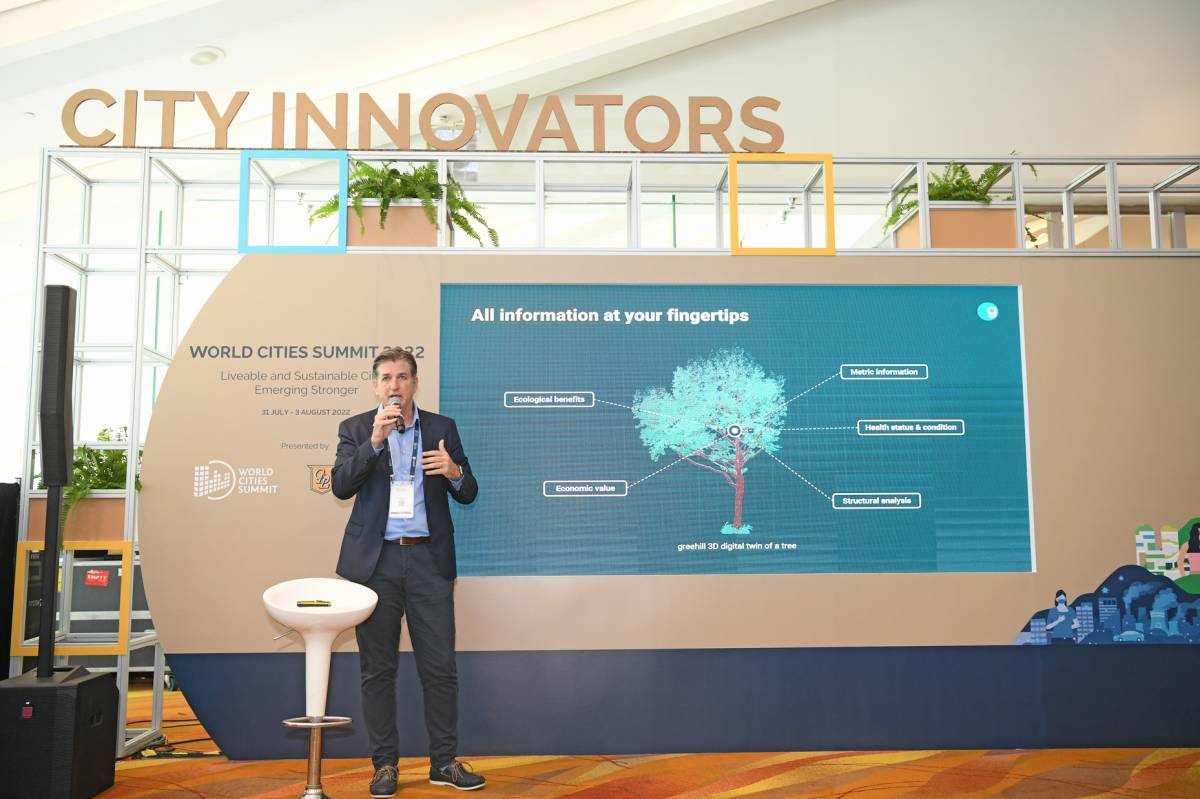 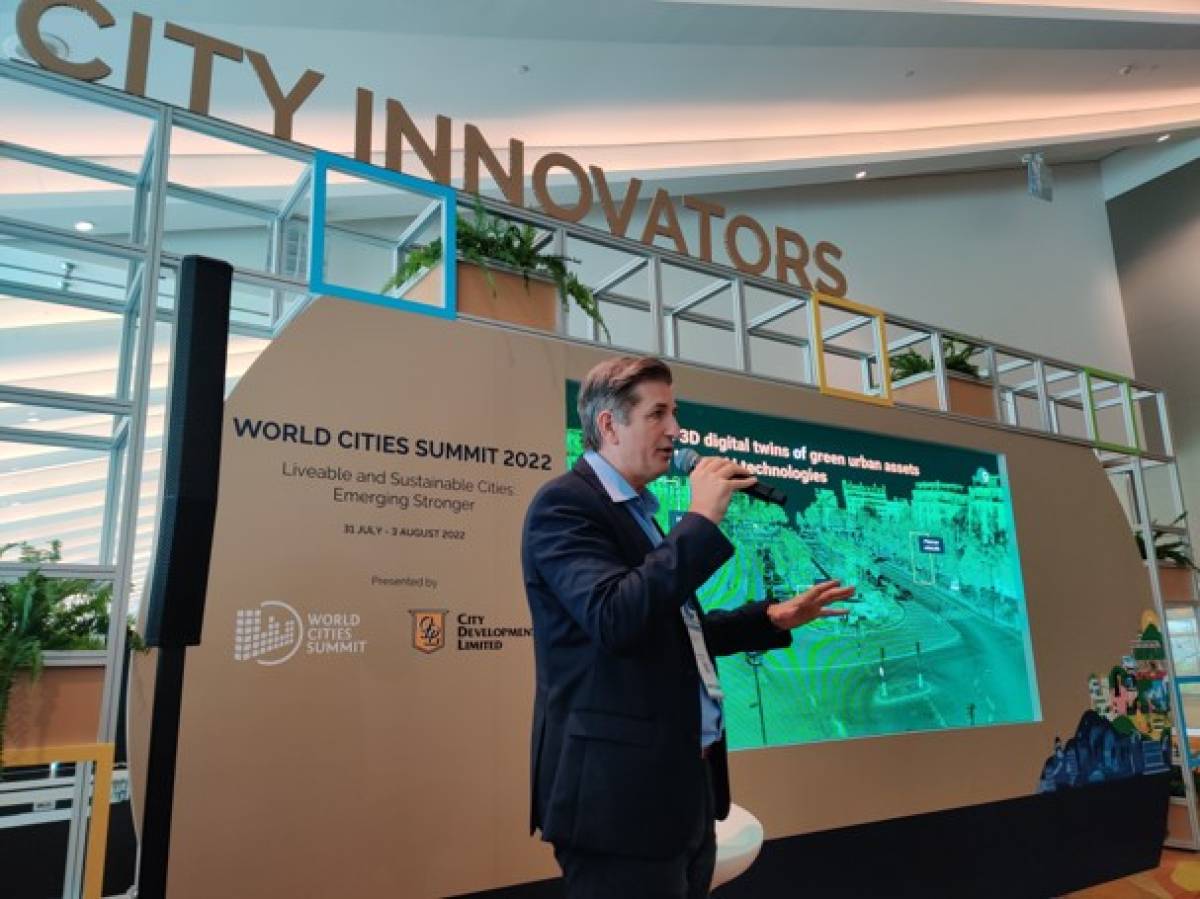 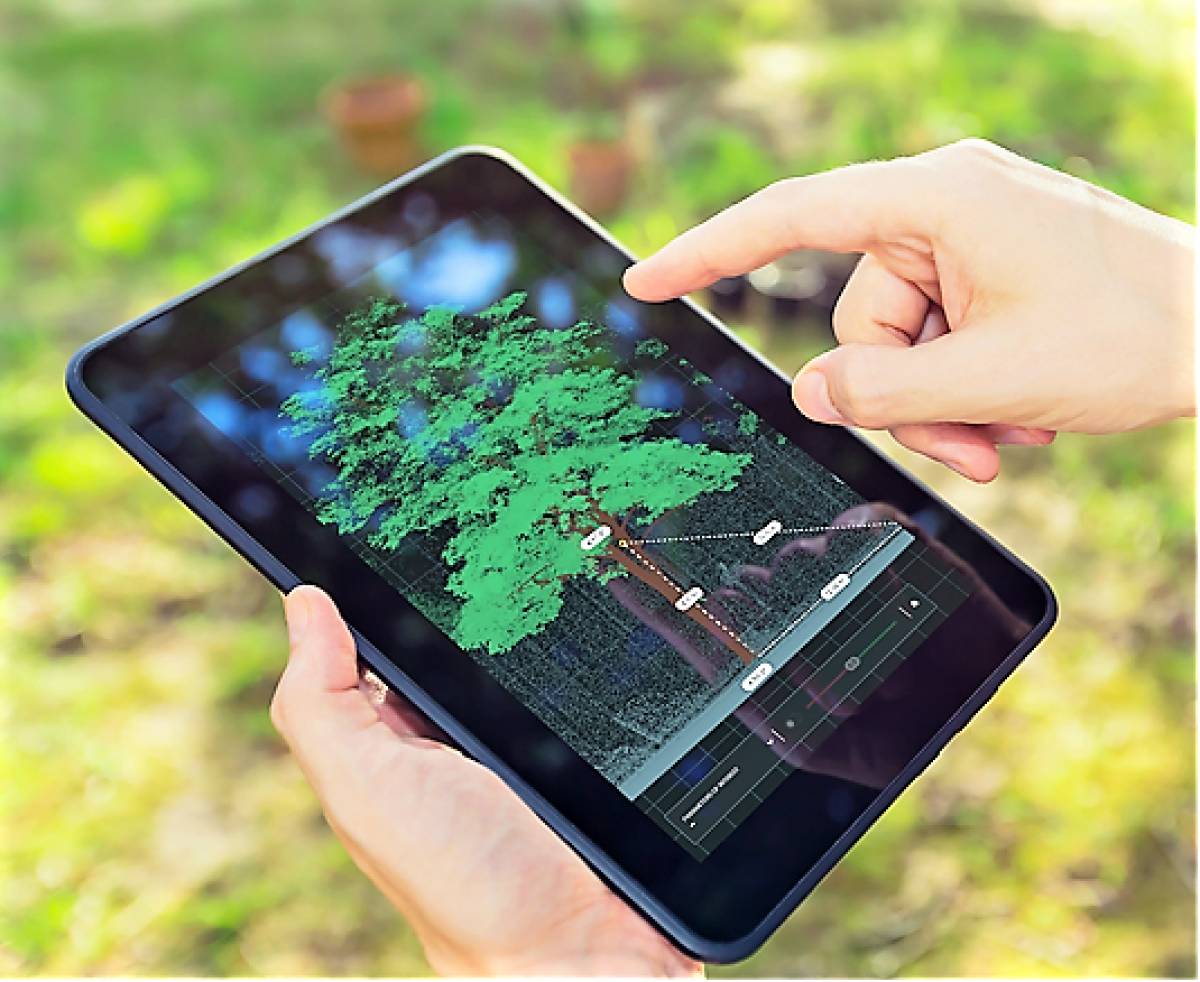 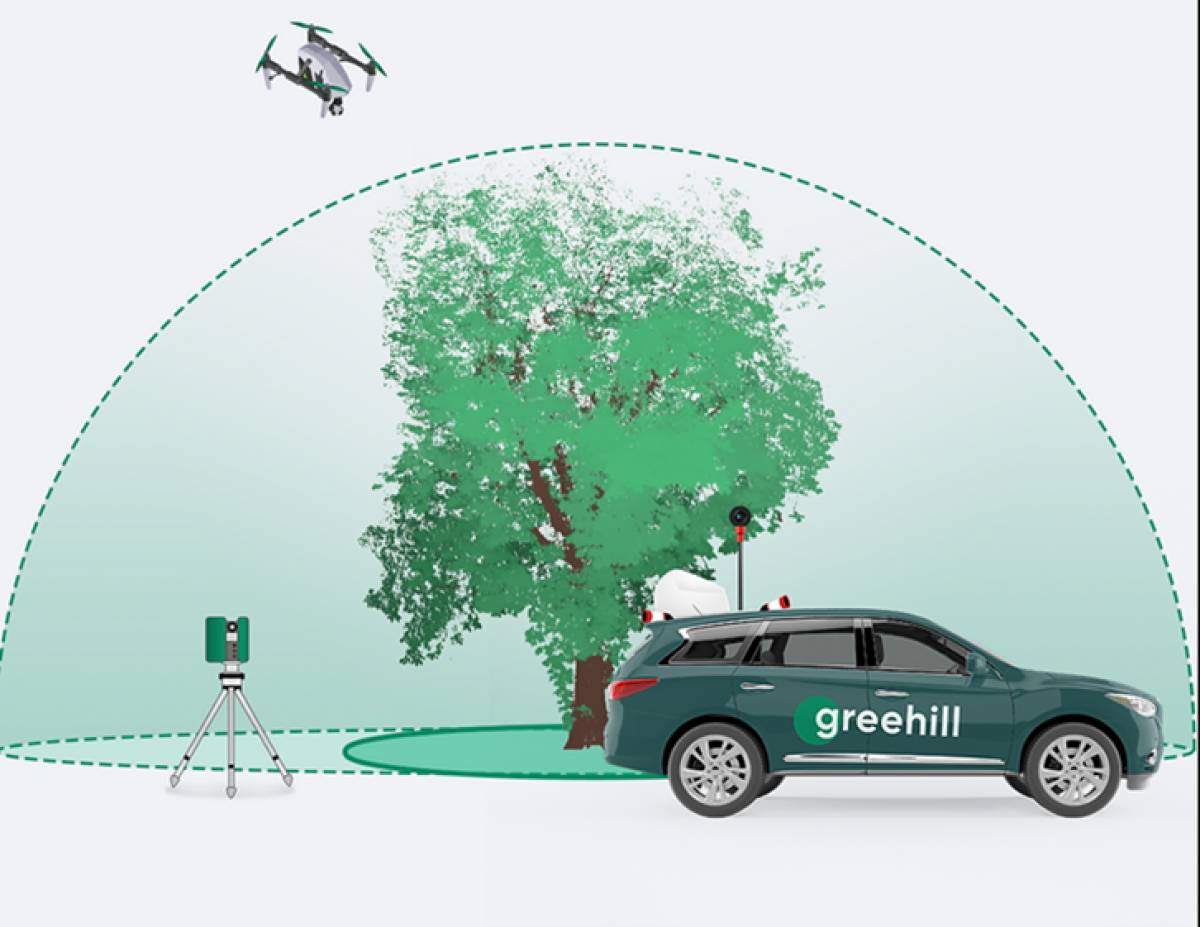 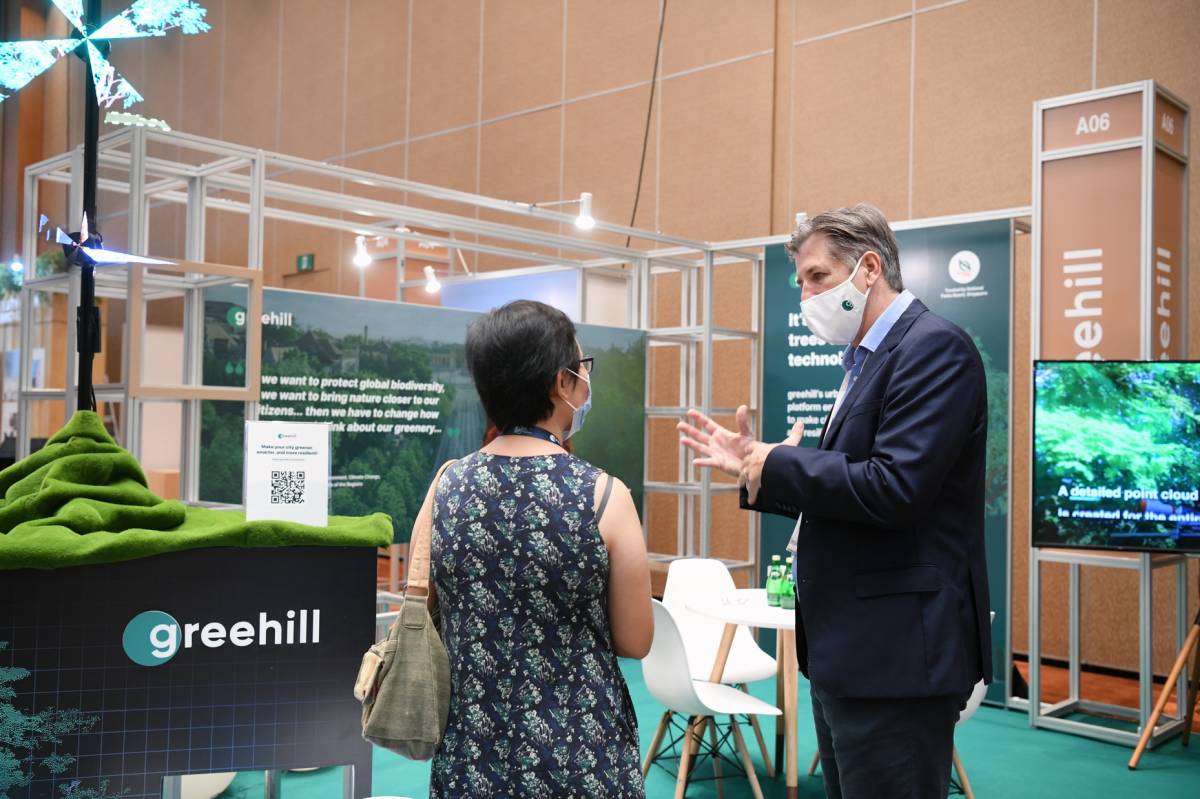 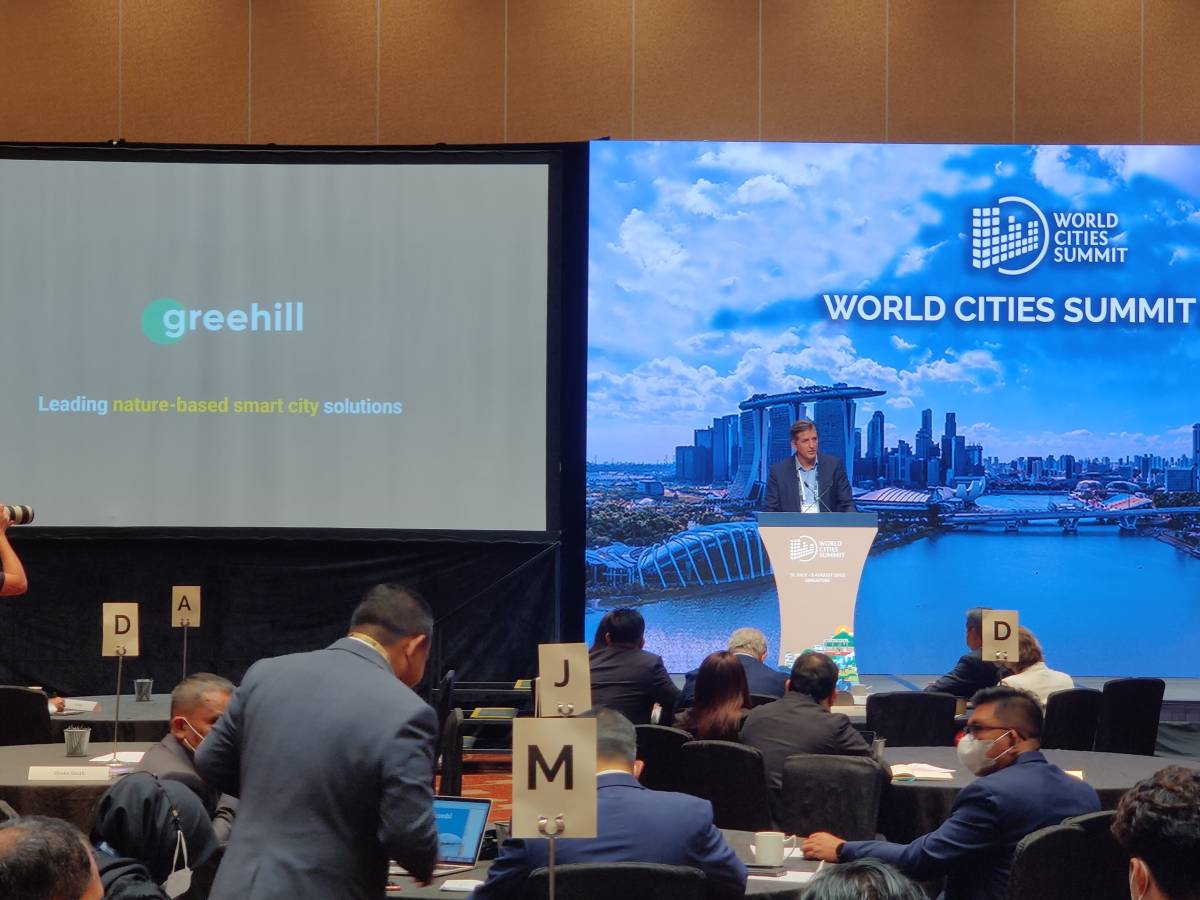 Mr Gabor Goertz, CEO and co-Founder of Greehill addresses a session at the World Cities Summit

(Singapore 30 August 2022) How do you put a price on a tree? Or to ask the question in more convoluted terms: How can “monetary valuation function” quantify the social, ecological, and economic benefits of trees?

Of course, if you’re buying a plant from a nursery, which you sincerely hope will grow into a tree to provide shade and shelter in your garden, you know exactly what it’s going to cost you.

Then you must take into account the cost of caring for that tree, with water, mulch, and anything else needed to sustain its growth.

But what about all the existing trees in your street and neighbourhood? In your city. Country wide. Even further afield. How to assess the value of trees? The benefits they provide to us all? For our health and the health of the planet?

Obviously, it is not just a matter of counting all the trees – or looking at global tree cover by satellite - and putting an average value of, say $1000 a tree, on all of them.

You have to assess every single tree to establish its state of health, its condition, its age, and address. All that matters.

It’s not an impossible task, according to Mr Gabor Goertz, CEO and co-Founder of Greehill.

When we met at the World Cities Summit earlier this month, he told me that his company has “powered digital urban forest management” since 2017 for the National Parks Board of Singapore (NParks).

Greehill’s platform helps arborists – “tree-huggers” if you like - conduct first-level inspections remotely, so they can spend more time on site proactively caring for their trees.

All well and good, but even in Singapore, that doesn’t sound easy as there is an estimated three million trees in public spaces, alongside roads and expressways, in the Botanic Gardens, around reservoirs and in the remaining forests.

The tricks up Mr Goertz’s very green sleeves are many and varied. Yes, he uses information from satellites, which provide the big picture and he uses drones to capture essential tree facts. On the ground, around the city-state’s extensive road network, Greehill mobilises laser scanners and highly sensitive cameras, mounted on a marked car.

This sensitive equipment collects data from every tree which comes into its sights. It produces a computerised 3D model - which Greehill calls “a digital tree” - so his team can perform health and safety checks, undertake custom measurements, as well as filter trees based on other important criteria. His data collection process can track 50,000 trees a day.

All this is essential to gather and retain climate and ecologically relevant data, including the amount of carbon dioxide (CO2) stored by each tree. Or even how a park with lots of trees can cool the adjacent area.

In this way, Mr Goertz tells us, resource-saving, evidence-based decisions can be made to maintain a safe and healthy tree population. It shows us how we can support resilient “green lungs” in urban areas for future generations.

His company is doing pioneering work in Singapore and Asia, but he and his colleagues also have a track record in Europe, particularly in his home country, Hungary, as well as in Austria, Germany, and France.

In Singapore - acknowledged as one of the world's greenest cities - Greehill’s work is producing dividends. By acting on what‘s been collected and assessed, NParks has seen a sharp decline in the number of accidents caused by falling tree branches.

Putting a more accurate figure on the value of each tree will guide property developers and encourage the retention of existing trees and encourage planting more.

Two items in Singapore’s Straits Times, since the World Cities Summit, pointedly drew attention to the importance of trees. One was a letter in the Forum page, where Singapore’s commitment to plant a million more trees by 2030 was applauded, but the correspondent made it clear that much more effort was needed  to save existing trees, essential as they are to green and cool the city, which is already suffering from the excesses of the Urban Heat Island effect.

The other newspaper report was headlined: “Construction firm fined for unauthorised street works, damaging 28 trees.”  Not only did the company, CHC Construction, fail to report the tree damage to NParks, but as three of the roadside trees had to be removed due to extensive root damage, it had to pay a fine of $13,000. The same report mentioned that “for damaging a tree in a public park, an offender can be fined up to $5000.”

Besides dealing with wilful actions like this, we are sure the extensive tree gathering data by Greehill for NParks will help to accurately value each and every tree. Ideally, before any are indiscriminately trimmed, cut down or removed entirely for residential or commercial developments.

We certainly know a lot more now about how Greehill’s “tree technology” extracts relevant metric, structural, ecological, and economic information, to create what is coming to be the most comprehensive and up-to-date inventory of the entire “urban forest.”

And another important question which needs an answer is, what is a tree?

In Greehill’s work for NParks, they classify every growing plant – even a palm or bamboo – as a tree if it has a circumference of at least 20 centimetres. Think of a tree then as something you can grip with two hands. Or for the bigger objects, maybe you need to get two arms around it.

That means even more of us – young and old - can become genuine tree-huggers. Trees not only green and cool our urban environments, but they are essential for human health and the health of the whole planet.

It quickly becomes apparent that this pioneering work in Singapore has global implications.

According to a recent article in Forbes there are around 3 trillion trees – more than 400 for every person on earth -  but globally we’re losing trees at a rate of around 25 billion per year.  This is happening largely because of land clearing for agriculture and food production, as well as through deforestation, illegal logging and out of control forest fires. Commercial forestry is less of a problem because in most countries this is managed sustainably, as more trees are planted than harvested.

As we know, the world could not exist without trees, so why are we not doing more to keep what we have, as well as grow more? Not only do trees improve soil fertility and water management, but they also produce the oxygen we need to breathe. By removing CO2 from the atmosphere and storing it safely, trees keep at least a third of the Earth’s polluting gases from doing damage to our health.

According to Thomas Crowther in an ETH Zurich study – which was reported in ABC Carbon Express in February 2019 -  replenishing the world’s forests on a grand scale could suck enough CO2 from the atmosphere to cancel out a decade of human emissions.

His research demonstrated that there is room for an additional 1.2 trillion trees to grow in parks, woods, and abandoned land across the planet. Dr Crowther has since clarified that tree planting on its own is not enough to stop climate change in its tracks.

Of course, it is essential to restore biodiversity, as well as make sure there are more trees and forests to absorb more CO2 and produce oxygen. We also must address all the other climate change demons, like fossil fuels, and make a concerted effort to switch to renewable energy.

To reinforce his commitment to forest conservation and restoration, Dr Crowther started his “Restor” project last year, according to a story in the Guardian,  as ‘a Google Maps of biodiversity’, showing the impact of restoration – from a forest to trees in your own garden.

Just as Greehill and NParks are doing in Singapore, we must continue to use technology – and the passion of tree-huggers – to put a much higher value on each and every tree, in every location, so we can more fully appreciate their attributes and benefits.

Ken Hickson is Managing Editor of ABC Carbon Express and its associated online magazine titles Focus on Forests, The Art of Travel and Ocean Outlook.