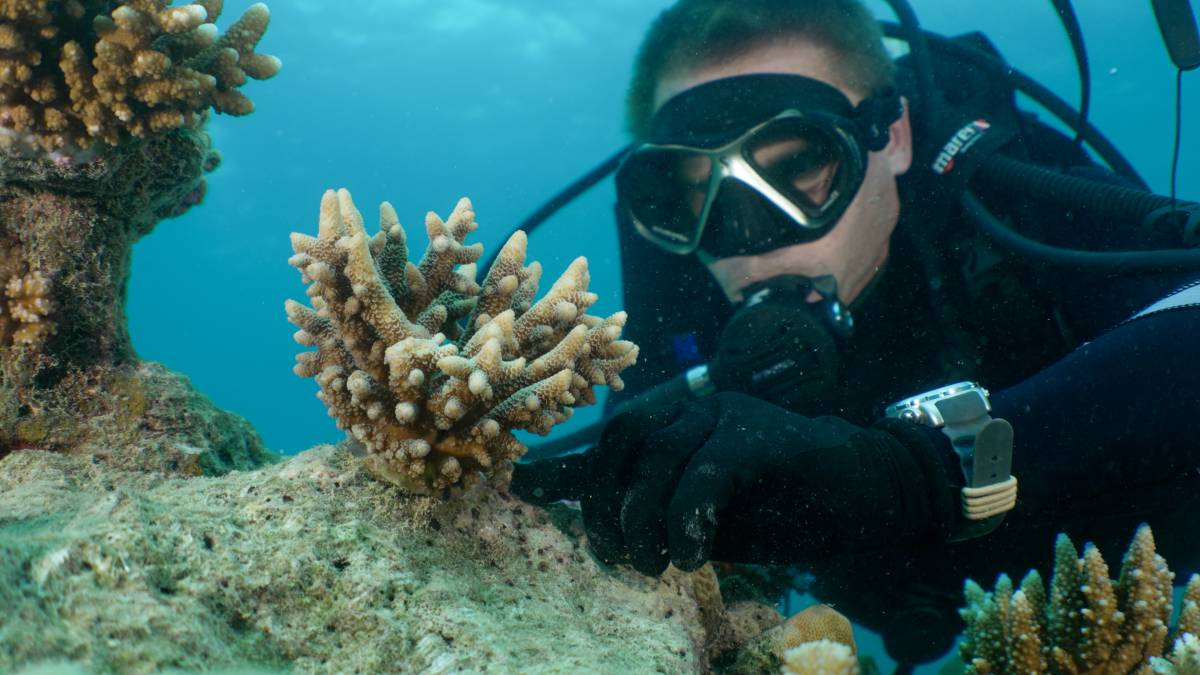 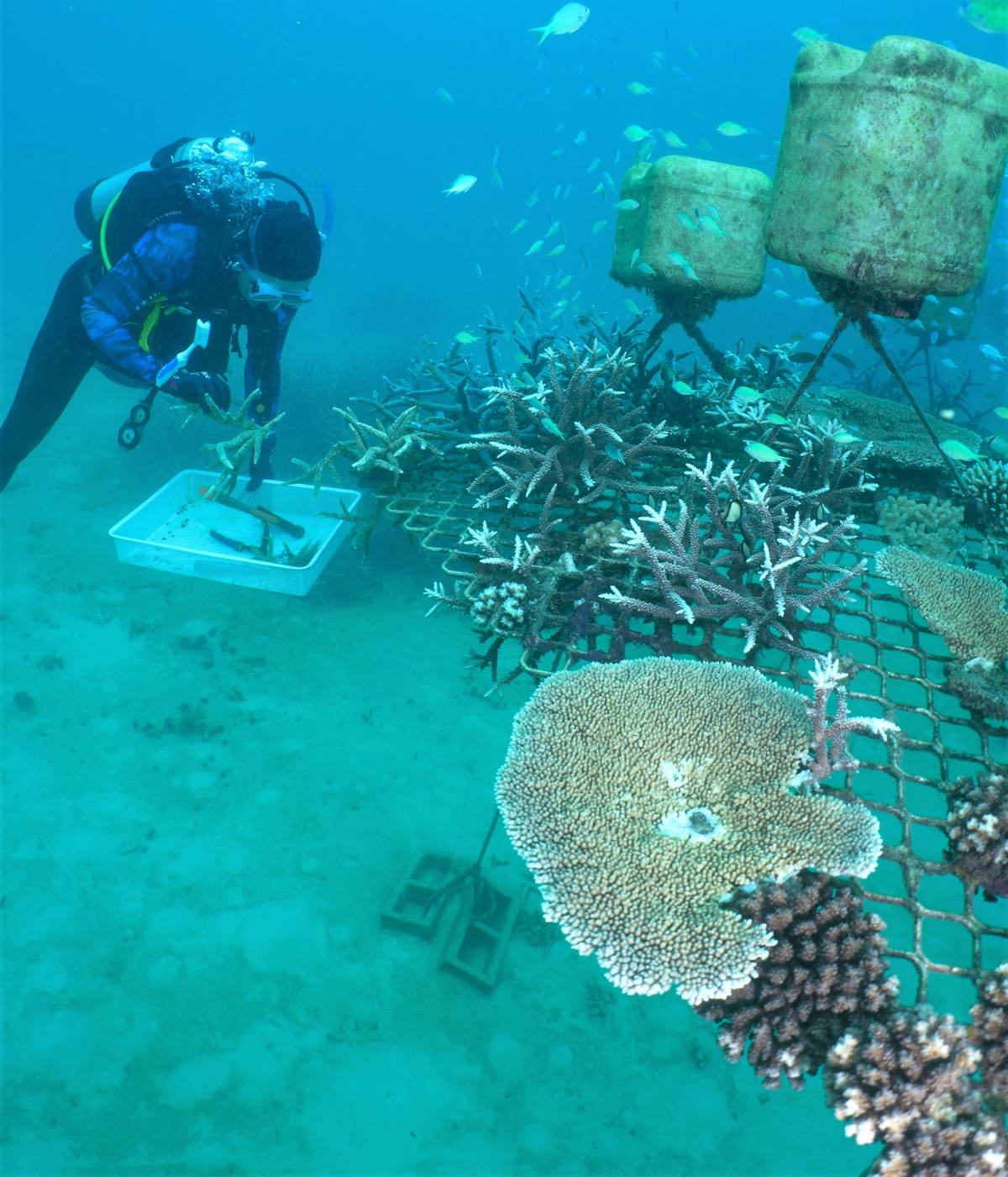 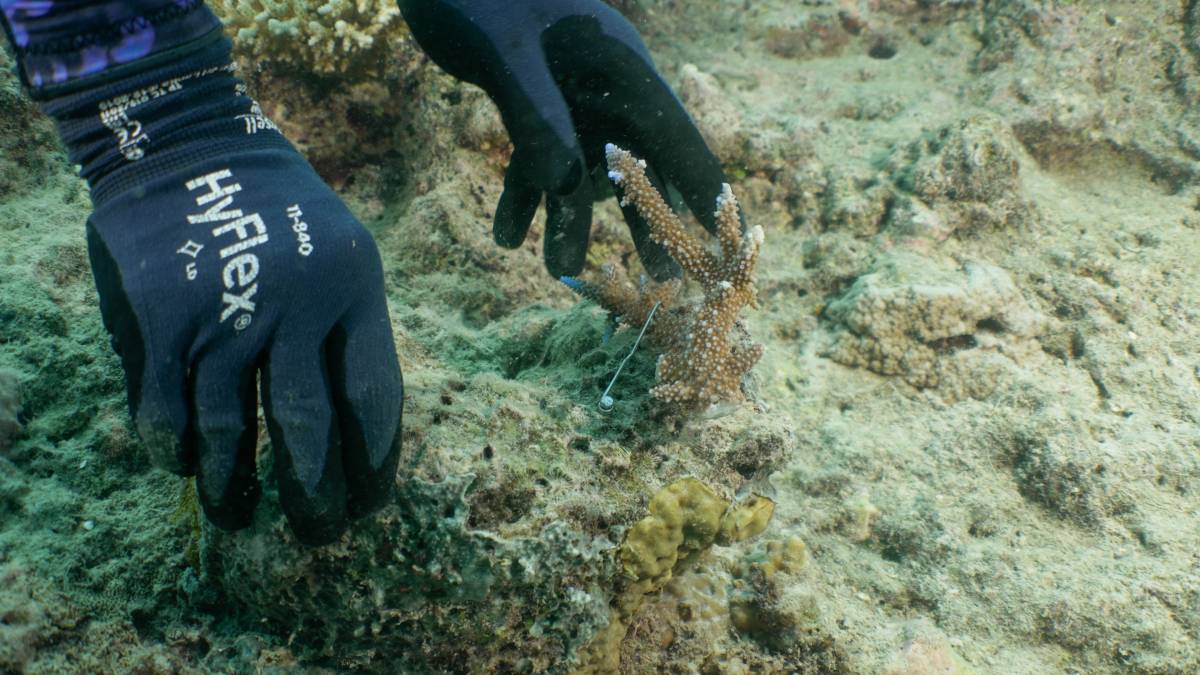 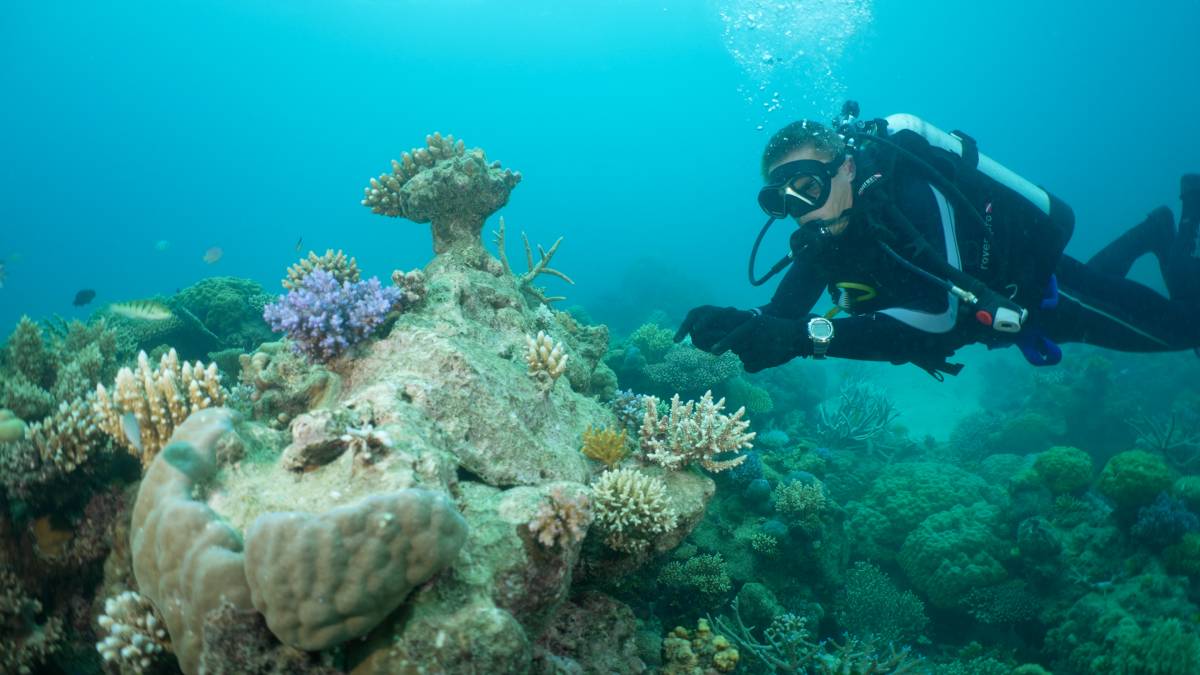 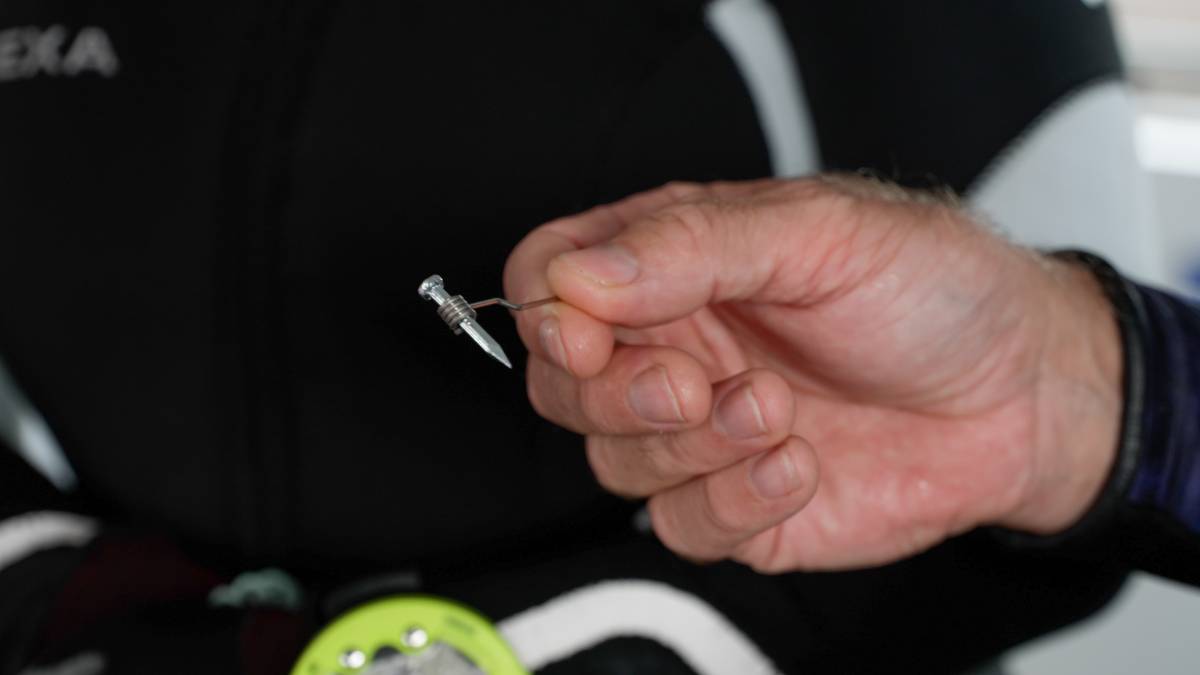 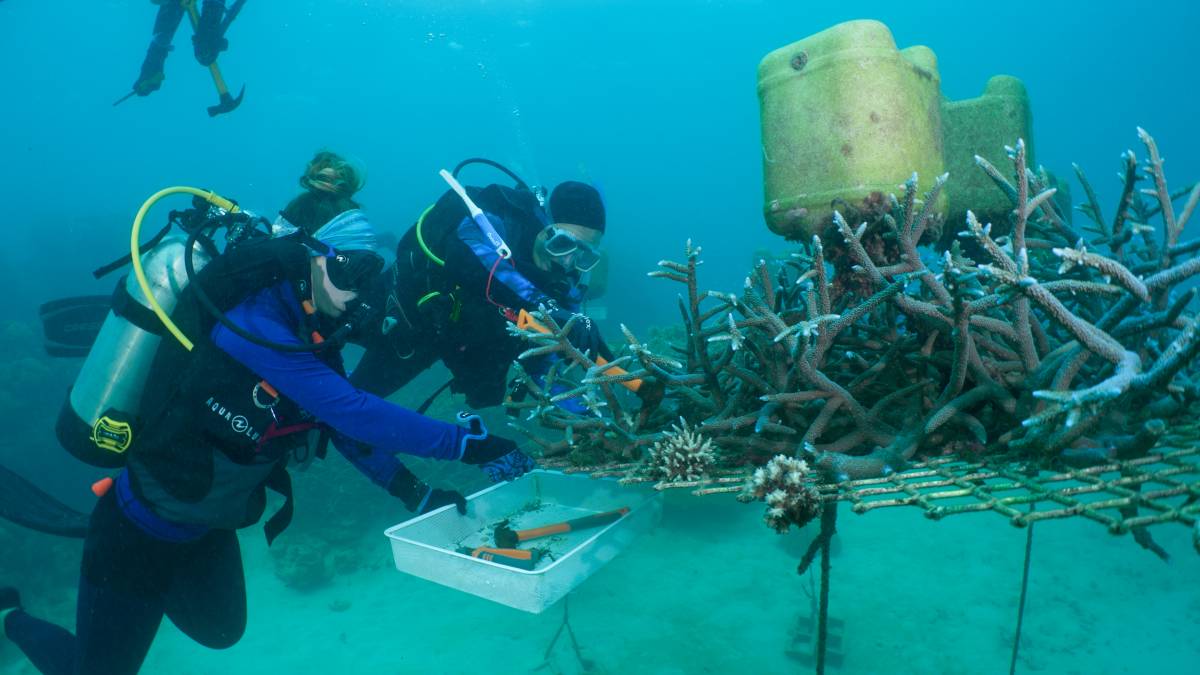 (Queensland February 24, 2022) An underwater brigade of ecologists, biologists and tourism operators donned their neoprene “uniforms” and united off the coast of Cairns last Thursday to check the results of a four-year Coral Nurture Program that aims to protect high-value Great Barrier Reef sites against future extreme weather events.

Funded by the partnership between the Australian Government's Reef Trust and the Great Barrier Reef Foundation, the program is a joint partnership between University of Technology Sydney (UTS) scientists and the Port Douglas-based Wavelength Reef Cruises.

Speaking from Opal Reef after wrapping up a two-week expedition last Friday, lead UTS researcher and coral scientist, Professor David Suggett said the Coral Nurture Program was “an unprecedented success. It's been a year since we've been able to visit these specific reef sites and they are looking spectacular. We've had two years now of really great growing conditions. The coral is looking very vibrant. We are seeing lots more recruitment, so it gives us lots of positive encouragement that the (Coral Nurture) reef sites are recovering.”

Prof Suggett continued, “The collective action of operators planting tens of thousands of corals means we can now start to understand how, when and why coral replanting is successful. That is now feeding forward to new stewardship-based management for the Great Barrier Reef."

The Coral Nurture Program began four years ago when John and Jenny Edmondson, both marine biologists and co-owners of the Port Douglas-based Wavelength Reef Cruises, set out to help tourism operators build reef resilience after experiencing the 2016 bleaching event. They have since recruited five other Cairns-Port Douglas reef operators into the Coral Nurture Program, with additional reef operators from the Whitsundays soon joining the program.

“After the bleaching in 2016, it was difficult to come out here and see it all,” said Jenny Edmondson, who set up Wavelength Reef Cruises in 2014 with husband John Edmondson.  We came up with ideas of how to have a cheap and fast way of out-planting large quantities of coral and thereby returning the sites back to what they used to be like.  We are seeing a really amazing percentage of coral cover now simply because of both planting and natural recovery.”

The Coral Nurture Program is simple and low tech. Under the management of scientists, it relies on staff from reef tourism boats to maximise their reef visits and tend to coral nurseries while tourists enjoy the wonders of the Great Barrier Reef nearby.

The trained team salvage broken coral fragments and grow these on nurseries suspended two metres beneath the ocean surface. They then use a specially designed Coralclip® device to attach corals to the reef without the need for chemical bonding agents. The Coralclip® method is faster and cheaper than traditional out-planting methods and has contributed to high survival rates.

“The coral clip is just a simple little metal spring clip,” said inventor John Edmondson. “It's nailed into the reef rock and a small coral fragment is placed under it. As long as that coral fragment stays still for around about six weeks, it will self-attach to the reef and after a couple of years, it will look exactly like other coral colonies.”

The Coral Nurture Program has delivered coral restoration at a scale never seen before on the Great Barrier Reef with more than 70,000 coral fragments planted across 27 sites and an average 85 percent survival rate. Almost 50,000 of these fragments were planted by the crew from Wavelength Reef Cruises.

While these statistics are impressive, it is the first generation of babies from the coral outplants that most excites Prof Suggett. “The Coral Nurture Program has been an unprecedented success. To give you an example, some of the very first fragments that we planted at the end of 2018, the size of my finger, are now spawning by themselves after only three years. This now means all the planting activity is able to start rehabilitating the reef on its own.

“That for us is a monumental milestone because it shows that reef replanting is working. It's producing new reproductively-viable colonies that can then turn into seeding to create thousands of other colonies over time. It's an absolute first as far as I know for this part of the world,” he said.

Both Prof Suggett and the Edmondsons believe the key to success is the unique partnership between science and tourism and the capacity for the tourism industry to respond quickly to future events.

“It's not just about restoring local reef sites,” said John Edmondson. “In fact, restoration is a very small part of it…it is capacity building, which is increasing the number of operators and the number of crew that can help respond to future extreme weather events and providing new expertise to the industry.”

Prof Suggett agrees going as far as likening tourism operators to emergency crews. “Immediately following storm damage, corals can break off and detach from the reef. A lot of those will survive if they are replanted quickly. But there are strict permits to operating on the reef and a lot of procedures and training are needed to do that. The tourism operators are like first responders. They have all the training, expertise and local site knowledge to get the job done.”

The Edmondsons add that planting coral fragments on one-time bald spots on the reef can make a huge difference to the aesthetics of a snorkelling experience.  “On any individual site, people are swimming in a radius of 70 – 100m off the back of a boat, covering around a hectare of reef. If you can plant 10,000 corals in an area, you are not necessarily making a difference to the percentage of live coral colour, but you are making a real difference to aesthetics by planting colourful and pretty corals that also attract fish,” said Mr Edmondson.

It is hoped that the reopening of Australia's borders to international travellers and an increase in the number of reef trips will help boost the program.  “A viable tourism industry, with travellers booked on regular departures, is fundamental to the ongoing success of the program,” Jenny Edmondson pointed out.

“Ultimately, we want visitors to come out, stick their heads underwater and see beautiful coral in its natural state — for them to experience the full beauty of the reef. Because once you see it, you'll love it and there's a greater chance you'll become part of its future,” added John Edmondson.