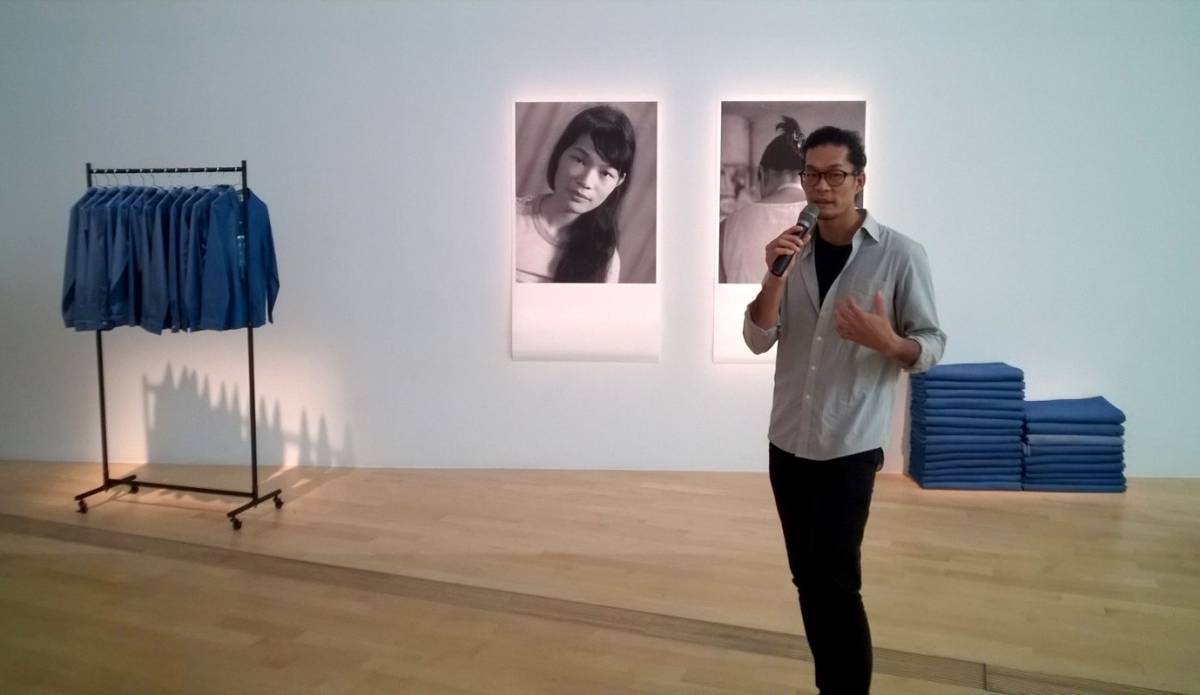 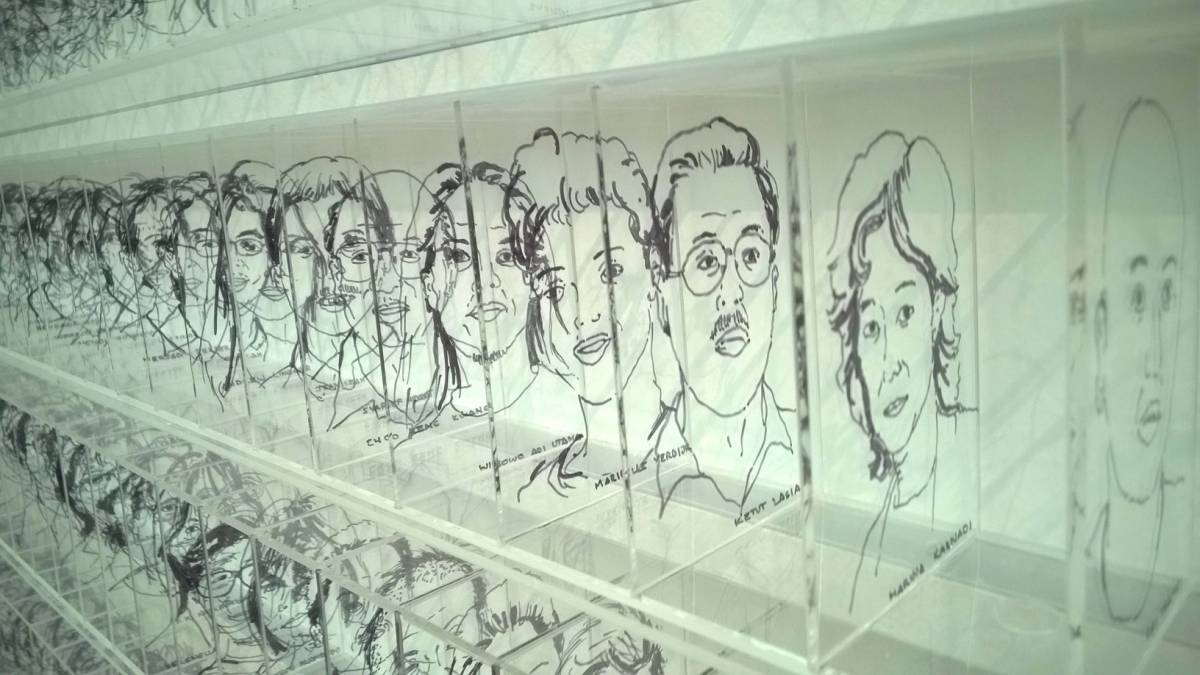 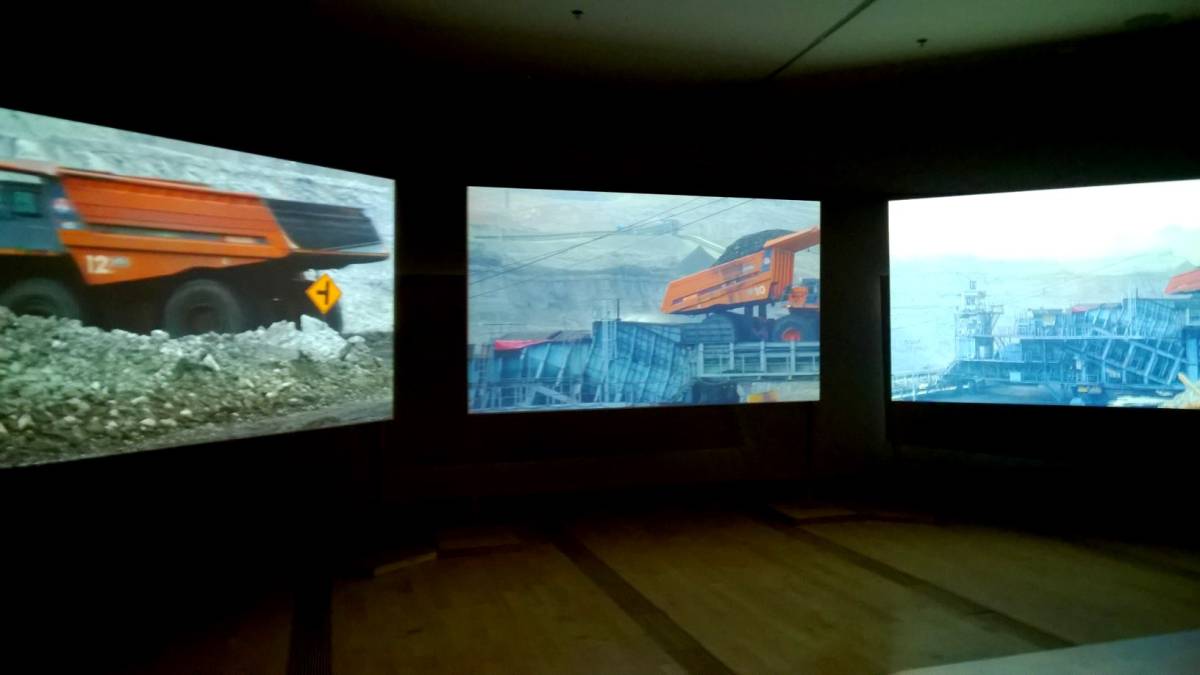 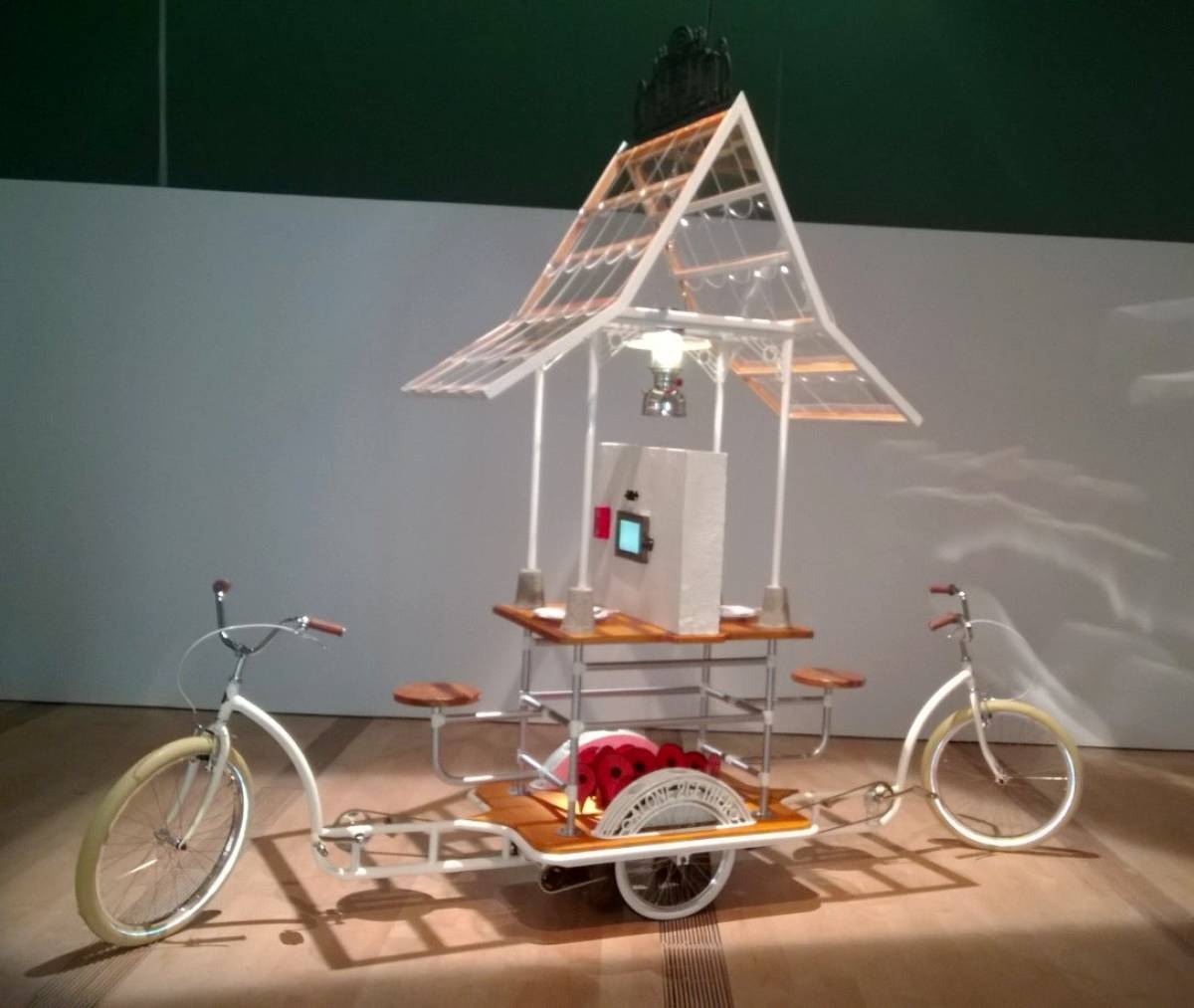 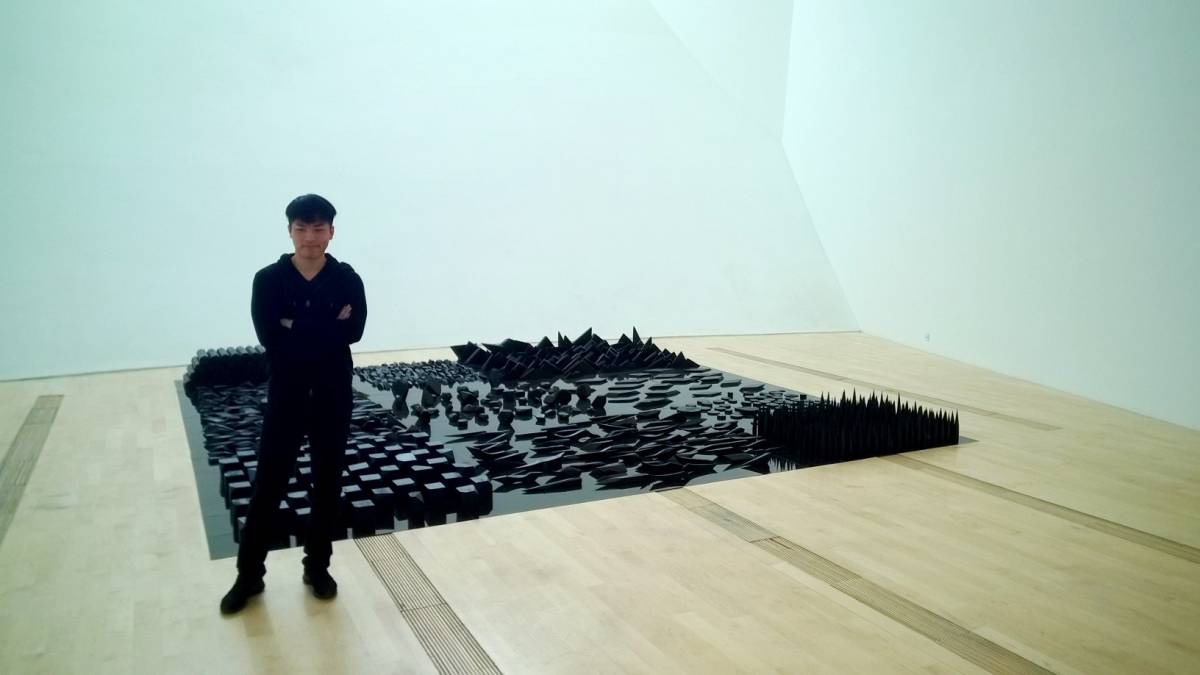 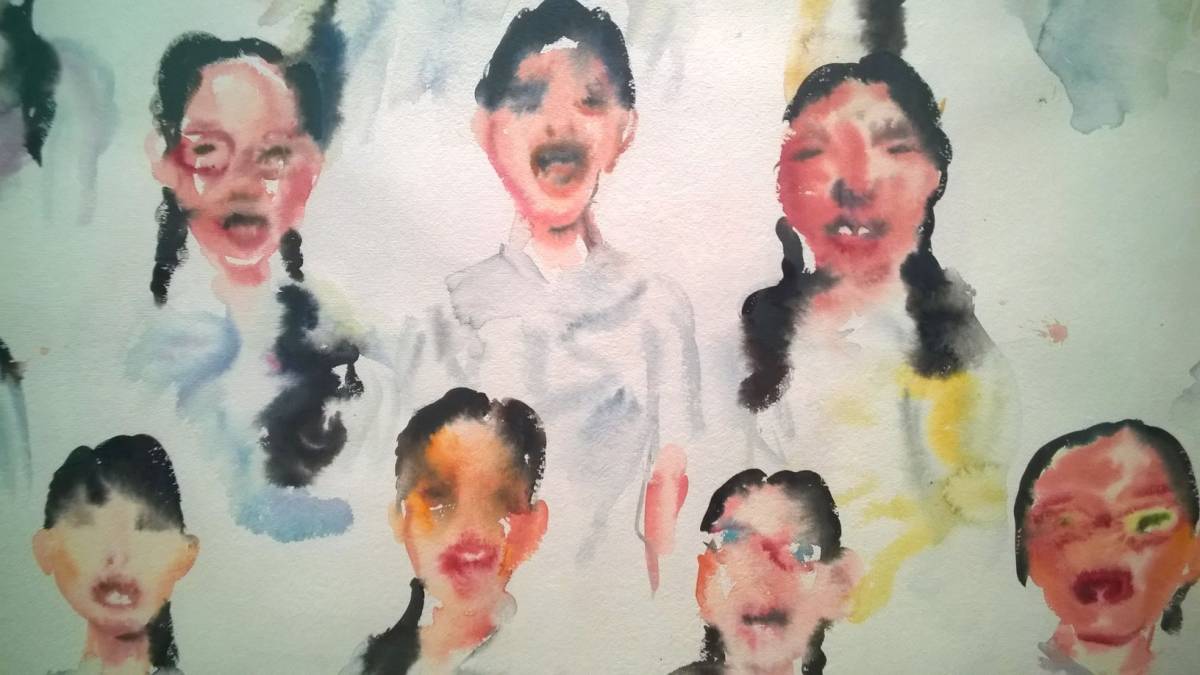 (Singapore January 15, 2016) – Returning to ArtScience Museum for the second year is the Prudential Eye Awards exhibition, which runs to 27 March 2016. A marquee event of the Singapore Art Week, the exhibition showcases a diverse range of works from 15 short listed artists for the 2016 Prudential Eye Awards, with the strongest Southeast Asia representation since the inception of the awards in 2014. Representing a selection of the best emerging contemporary art in Greater Asia, the Prudential Eye Awards shortlist includes three Thai artists for the first time: Tawan Wattuya (‘Best Emerging Artist Using Painting’), Sutthirat Supaparinya and Anupong Charoenmitr (‘Best Emerging Artist Using Digital/Video Work’). They have all displayed in various solo and group art exhibitions in Thailand and internationally. Their representing artworks reflect on issues of industrialisation and globalisation that are familiar to many Asian audiences. ‘When Need Moves the Earth’ by Sutthirat Supaparinya captures the consequences of a coal mine and a water dam used to generate electricity, encouraging viewers to reflect on the high consumption of electrical power, and raises the question on how societies can improve its sustainability planning.

Representing Vietnam in the same category is independent filmmaker and video artist Trinh Thi Nguyen with the essay film ‘Letters from Panduranga’. The artwork was inspired by the Vietnamese government building the country’s first two nuclear power plants in Ninh Thuan, right at the spiritual heart of the Cham people, threatening the survival of this ancient matriarchal Hindu culture that stretches back almost 2,000 years. The film reflects on the legacy of war and colonisation history of Vietnam, and this is also the first time that a Vietnamese artist has ever been nominated at the Prudential Eye Awards. Also reflective and critical of environmental and war issues are the artworks from Bangladeshi artists Shumon Ahmed and Promotesh Das, who are also the first artists representing Bangladesh at the prestigious awards. Shumon Ahmed’s series of photographs – ‘Metal Graves’ depicts the ugly environmental effects at the world’s second biggest ship-breaking industry. The broken ships in their metal graves embody nostalgia for a lost past, and a disregard for environmental contamination fueled by urban growth and industrialisation.

Promotesh Das’ series of sculptures are imbued with a sense of tenderness and horror, juxtaposing beautiful shola flowers with war equipment and artefacts. The common thread of war imagery running through is also evident in Cambodian artist Sareth Svay’s sculptures. Using black rubber sandals as metaphors of corrupted communism, the installation communicates the painful memories of the people of Cambodia that have resulted from tragedy they have experienced in the war.

Niru Ratnam, Director of Prudential Eye Awards said: "I believe that the shortlist for this edition of the Prudential Eye Awards is the strongest so far with artists from established art regions in Asia being joined by artists from new art worlds such as Bangladesh and Cambodia. The artists explore some serious themes but also produce beautiful work. The exhibition of their works will show the real depth of talent that is emerging across Asia at the moment."

Honor Harger, Executive Director of ArtScience Museum said: “ArtScience Museum is delighted to bring together some of the region’s most exciting artists in an exhibition of provocative artworks which will challenge visitors’ perspectives on contemporary topics ranging from environmentalism, to the impact of conflict, to industrial development. Our intention is for this show to stimulate conversations among artists and audiences in Asia and beyond. We are pleased to support Prudential Eye Awards in creating this platform for exchange, and this will be a key part of our ongoing work to support the vibrancy of Singapore's visual art ecosystem.” Sean Rach, Chief Marketing Officer, Prudential Corporation Asia said, “Prudential has a long heritage of supporting contemporary art and we are proud to be hosting the Prudential Eye Awards in Singapore for the third consecutive year. All of these artists provide a unique view into the heart and soul of this dynamic and vibrant region, and we hope these Awards will help them gain greater international acclaim while further raising global awareness and appreciation of Asian contemporary arts and culture.” This two-and-a- half month public exhibition is part of the Prudential Eye Awards 2016 which will take place at MasterCard Theatres - Sands Theatre at Marina Bay Sands on Tuesday 19 January 2016.

The third edition of the awards features 10 prizes with 5 categories of Best Emerging Artists, using mediums such as digital/video, installation, painting, sculpture and photography. The winner chosen for the coveted ‘Overall Best Emerging Artist’ earns the opportunity to hold a solo exhibition at START Art Fair held at the renowned Saatchi Gallery in London. Sponsored by Prudential, a leading life insurer in Asia, the Awards is a major component of the the Prudential Eye Programme, an initiative aimed at nurturing artistic talent, and will be supported by a Catalogue produced by SKIRA. The digital/video and photography categories are presented by LG Electronics. Complementing this year’s Prudential Eye Awards exhibition is a series of complimentary public guided tours, workshops and an exclusive conversations series with some of the artists. These activities aim to deepen audiences’ engagement with the displayed artworks, by facilitating discussion and exploration of the stories behind them.

Also presented exclusively during the opening weekend is the Conversations programme: ‘The Artist and I’. Audiences will have the opportunity to hear selected artists from the Prudential Eye Awards 2016 shortlist share how their personal experiences are expressed in their art form, and how perspectives on current affairs influence their art and choice of medium.

ArtScience Museum is also presenting a series of ‘Fun with Photogram’ workshops for aspiring artists. The public can learn how to create photographic images without the use of a camera, and learn basic darkroom techniques to develop photograms using traditional print photography methods.