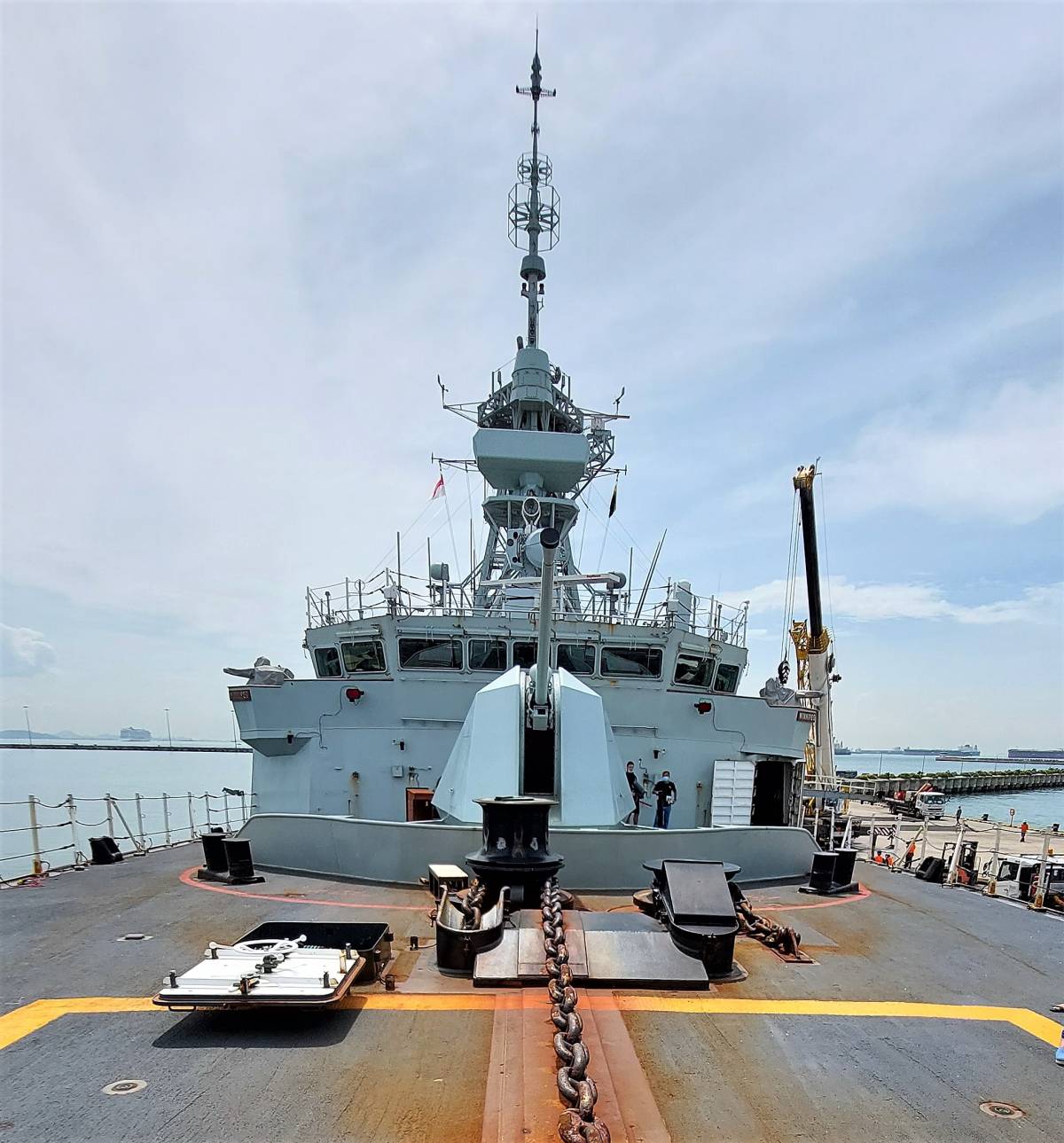 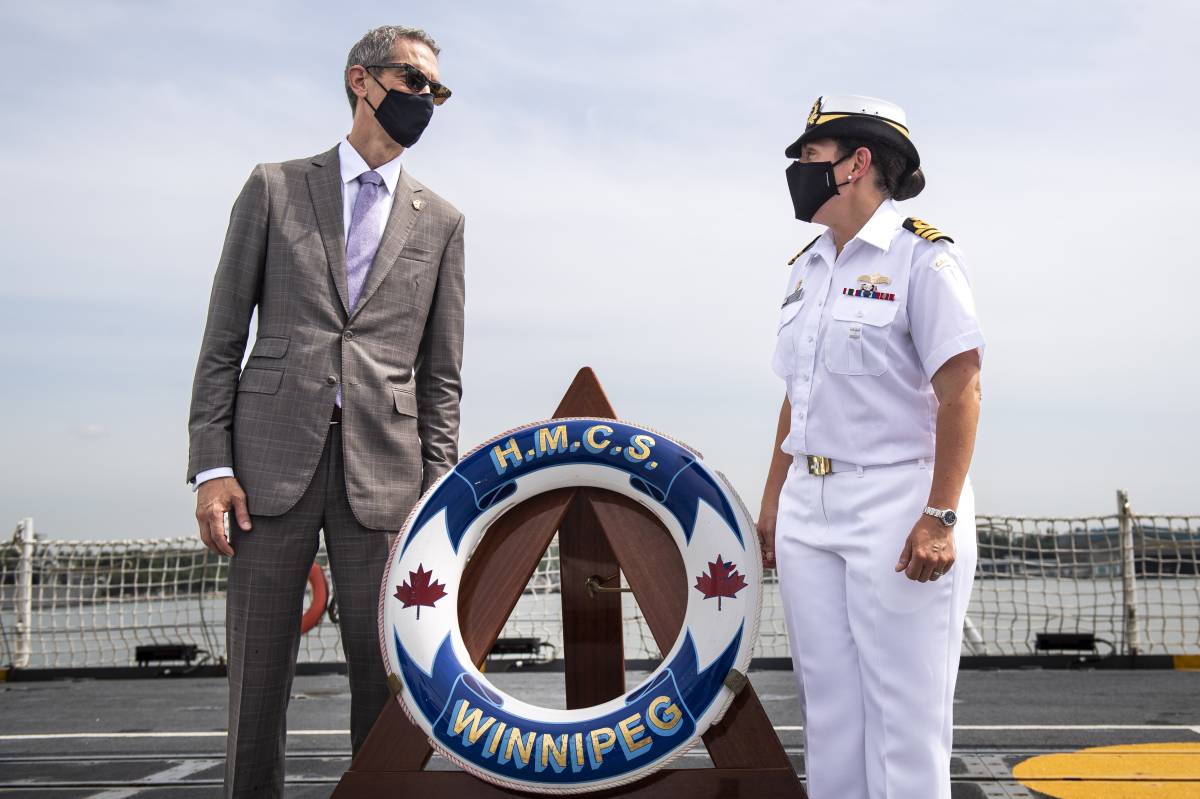 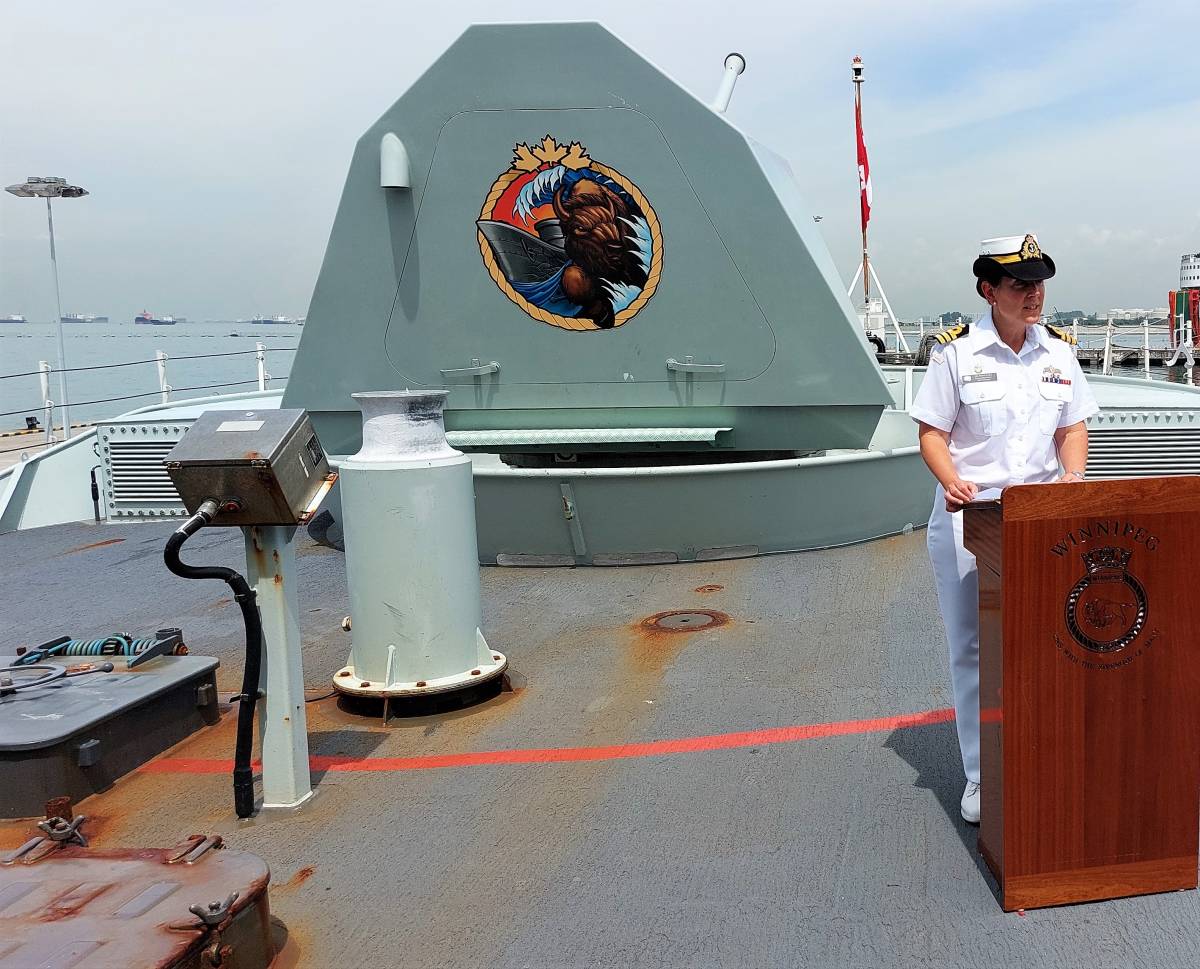 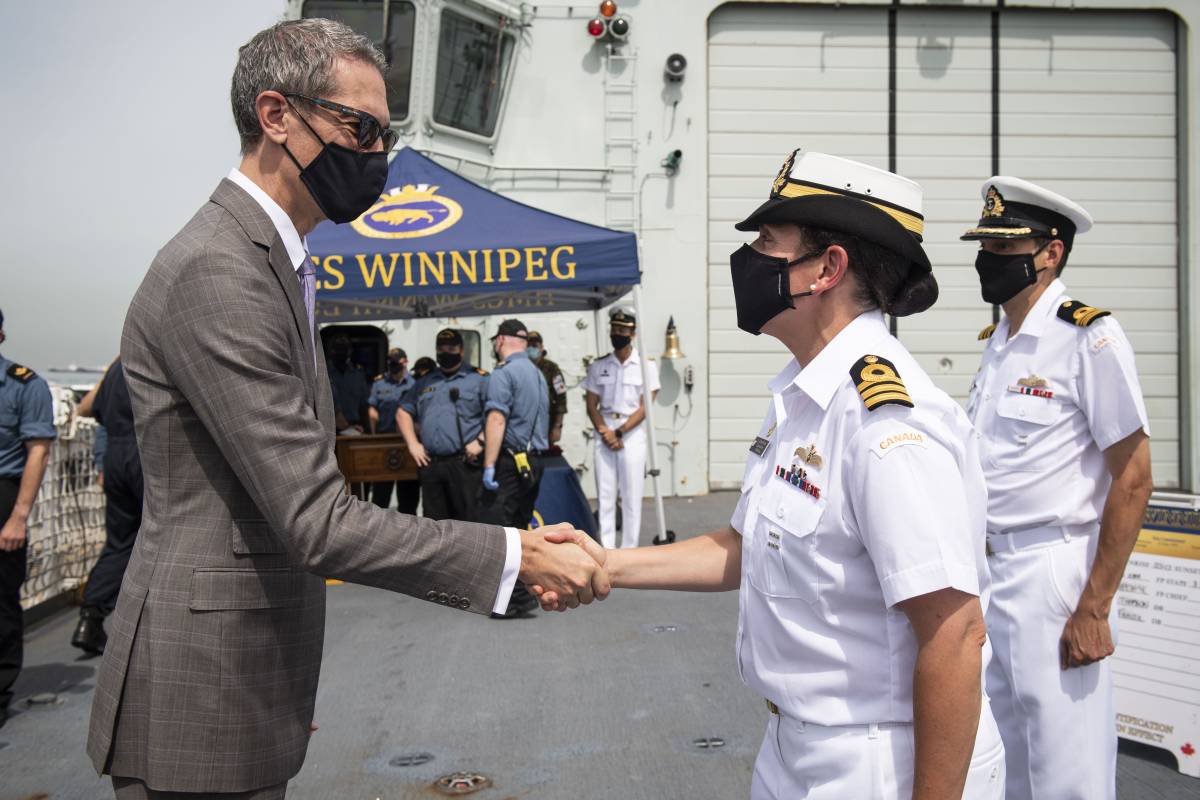 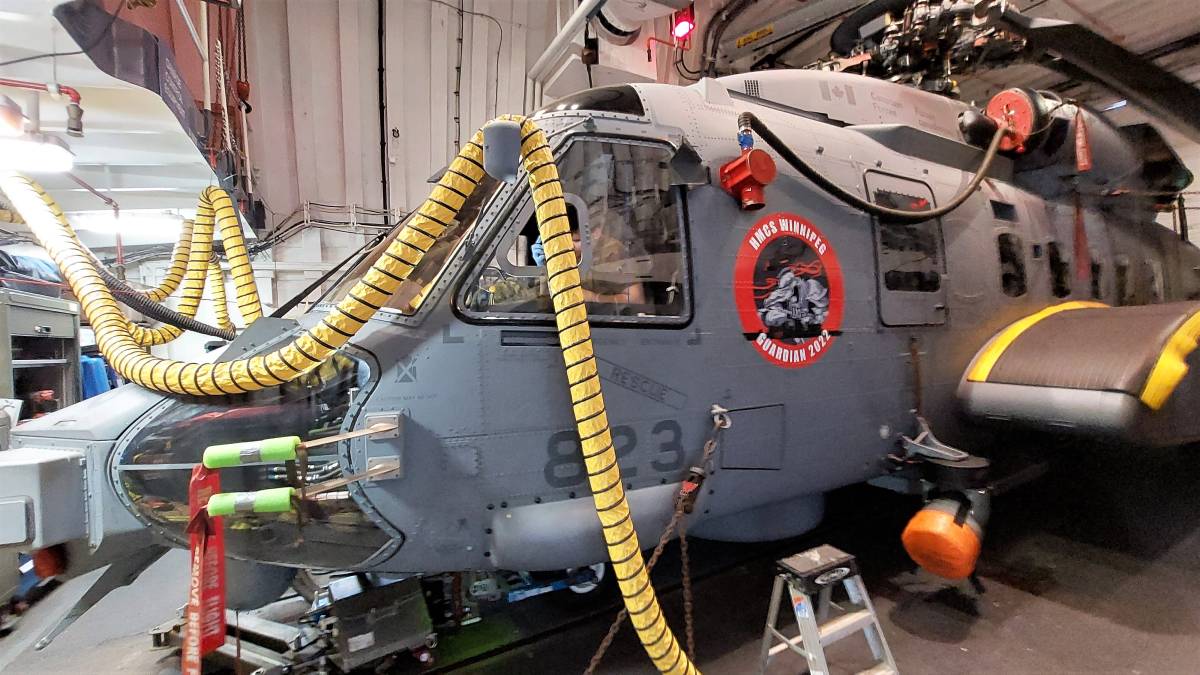 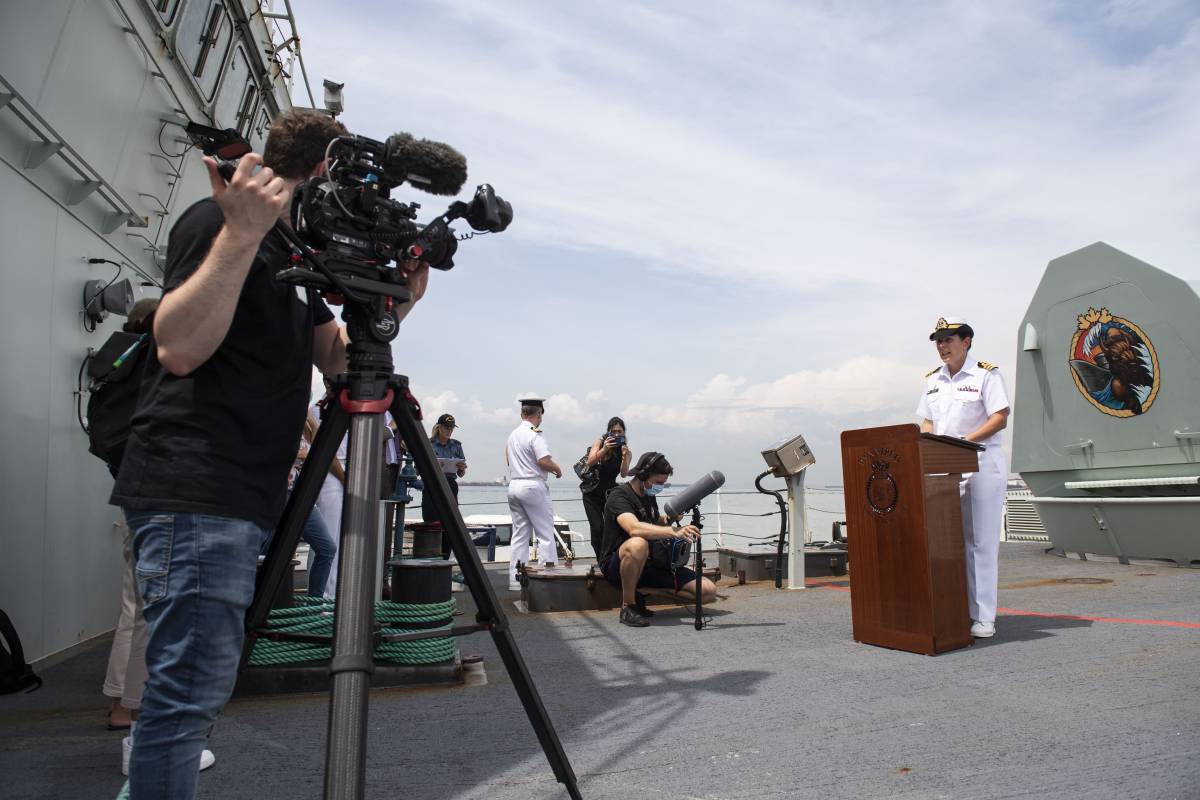 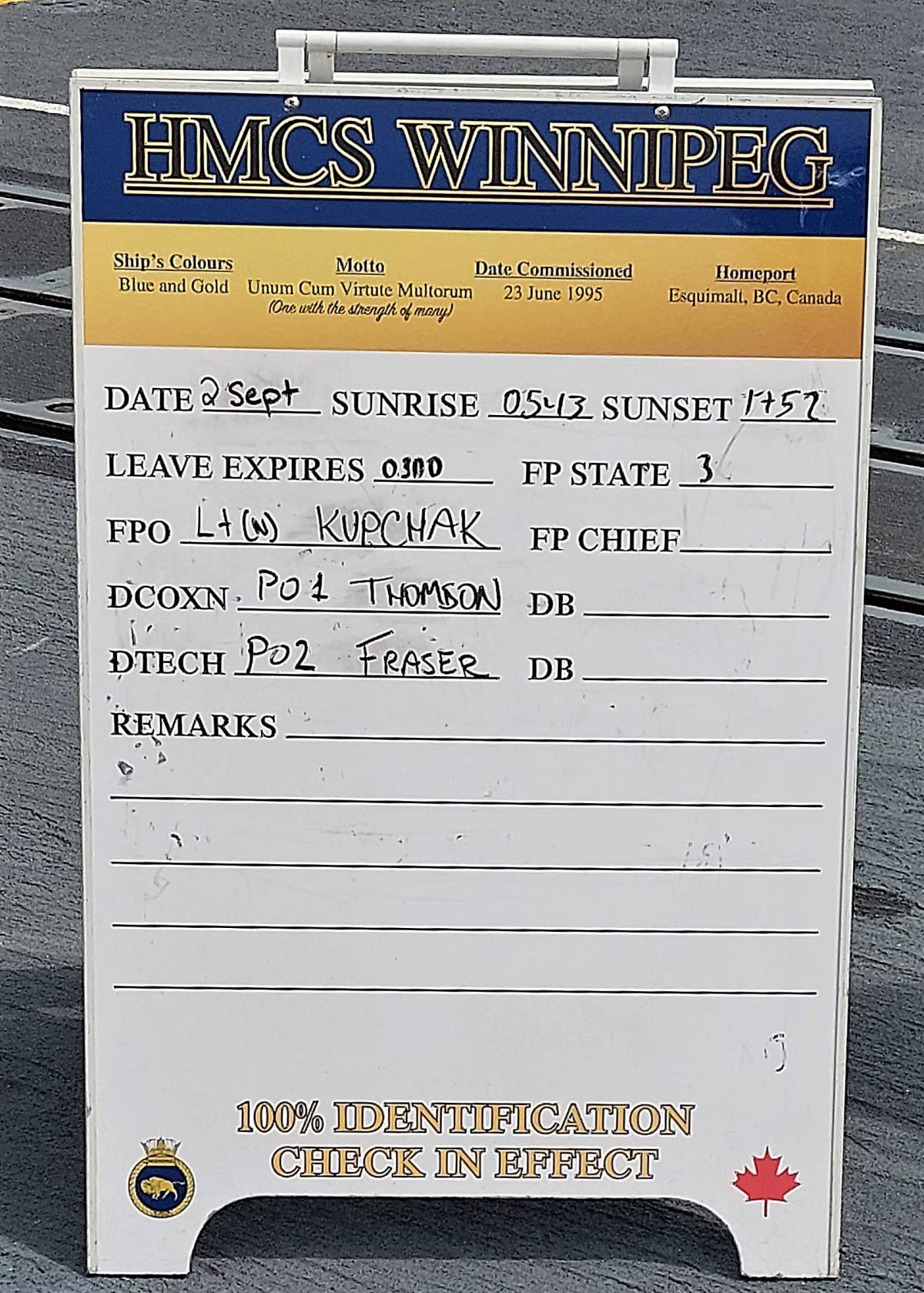 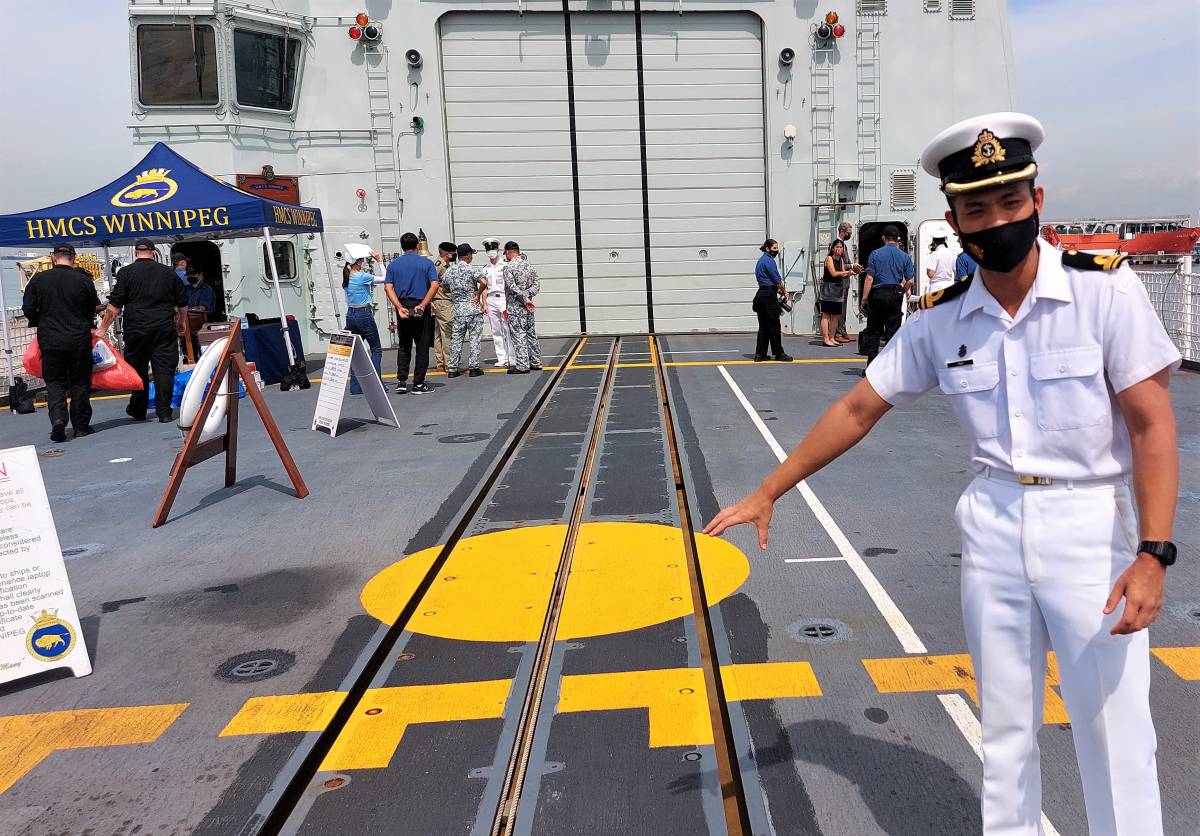 (Singapore September 6, 2022) Her Majesty’s Canadian Ship (HMCS) Winnipeg arrived in Singapore today on a six-month deployment from its homeport of Esquimalt, Canada. This is the seventh visit by a Canadian navy ship to Singapore in five years and the first with a female commander and a female Coxswain, Chief Petty Officer First Class Susan KL Frisby, CD. HMCS Winnipeg Commanding Officer (CO), Commander Annick Fortin was welcomed to Singapore by High Commissioner of Canada to Singapore, Jean-Dominique Ieraci.

During its seven-day stay in Singapore the ship will be restocked, refuelled, painted and have whatever minor repairs are required. “We look forward to meeting and training alongside our Singaporean partners during this second port visit of Operation PROJECTION 2022. As per our motto ‘One with the strength of many,’ stated Commander Fortin. “HMCS Winnipeg is ready to uphold Canada’s ongoing commitment to global peace and security and enhance relationships with Canada’s allies and partners.”

“Security in the Indo-Pacific region is inseparable from Canada’s own security,” stated H.E. Jean-Dominique Ieraci, who was appointed the High Commissioner of Canada to the Republic of Singapore in August 2021. “We are therefore delighted to welcome HMCS Winnipeg to Singapore. This seventh Canadian ship visit to Singapore is a concrete demonstration of our deepening bilateral defence and security ties.”

The September 6-13, 2022, visit to Singapore is part of Canada’s defence engagements in the Indo-Pacific this fall. This comprehensive effort also includes HMCS Vancouver and a CP-140 Aurora long-range patrol aircraft deploying to Northeast Asia. The ships and aircraft will remain deployed in the region until November 2022, supporting both Operation (Op) PROJECTION and Operation NEON.

Operation NEON is Canada’s contribution to a coordinated multinational effort to support the implementation of United Nations Security Council (UNSC) sanctions imposed against North Korea. During the mission, the Canadian Armed Forces (CAF) conducts surveillance operations to identify suspected maritime sanctions evasion activities, in particular ship-to-ship transfers of fuel and other commodities banned by the UNSC resolutions. The last time the CAF deployed in support of Op NEON was from 16 September to 20 November 2021.

“We also look forward to enjoying what Singapore has to offer,” Commander Fortin stated as she wrapped up a Q&A session with local and international press.

The frigate arrived from Jakarta after participating in Exercise Rim of the Pacific (RIMPAC) 2022 which concluded successfully with over 800 Canadian sailors, aviators, and soldiers, having participated in this year’s iteration of the biennial exercise that took place in and around the Hawaiian Islands from June 29 to August 4, 2022.

The Canadian Armed Forces’ contribution to RIMPAC 2022 included Her Majesty's Canadian Ships (HMCS) Vancouver and Winnipeg, two CP-140 Aurora aircraft, and two CH-148 Cyclone (pictured above) helicopters. Canada also occupied key leadership positions, including Deputy Command of Combined Task Force RIMPAC, Command of the Combined Force Air Component, and Deputy Command of the Combined Force Maritime Component Command. This was the 28th iteration of RIMPAC, and Canada is one of only three nations to have participated in every one since 1971.

As part of Op PROJECTION, HMCS Winnipeg is participating in bilateral and multinational training exercises and engage with regional militaries and other international security partners in order to promote regional security and stability. Activities conducted during Operation PROJECTION will help build confidence and military partnerships. However, on this visit to Singapore it will not be conducting any training exercises with the Royal Singapore Navy before it leaves for Malaysia.

During the port visit, the Canadian Armed Forces (CAF) will be interacting with local counterparts and stakeholders to promote collaboration and friendship, including a media tour of the ship and a reception hosted on board while the ship is alongside the RSS Singapura – Changi Naval Base.

Canada and Singapore enjoy strong bilateral relations, expanding in the areas of trade, defence and security. Singapore and Canada are also like-minded on issues ranging from open trade, the rules-based international order, multilateralism, and climate change. With bilateral trade in goods of about $3 billion in 2021, and services trade of approximately $3.5 billion in 2021, the commercial relationship is particularly robust. The two countries also collaborate closely together in regional and international organizations, including the United Nations (UN), the Association of Southeast Asian Nations (ASEAN), the Asia-Pacific Economic Cooperation (APEC), and the World Trade Organization (WTO).

In defence and security relations, Canada and Singapore cooperate across several areas including cyber, health, and personnel exchanges, as well as preventing the spreading of disinformation. Canada and Singapore hold regular ministerial and senior-level dialogues on key security issues of mutual interest including maritime security, South China Sea, multilateralism, and threats to regional stability.

Singapore has hosted the ships of the Royal Canadian Navy regularly in recent years, providing essential support to Canada’s ability to maintain an effective, credible and persistent presence in the region, even during the worst of the COVID pandemic. In 2022, the Honourable Anita Anand, Canadian Minister of National Defence and Singapore’s Minister for Defence Dr. Ng Eng Hen signed a Defence Cooperation Arrangement. The same month, Canada and Singapore signed a security instrument on the reciprocal protection of classified information relating to defence contracts. Both of these are important milestones in the growing defence and security relationship between two like-minded partners.

When asked if he would be enjoying what Singapore has to offer a Canadian sailor replied, “Yes, I want to take pictures of monkeys for my children.”