Barrier-free habitat for an improved viewing experience of the civets 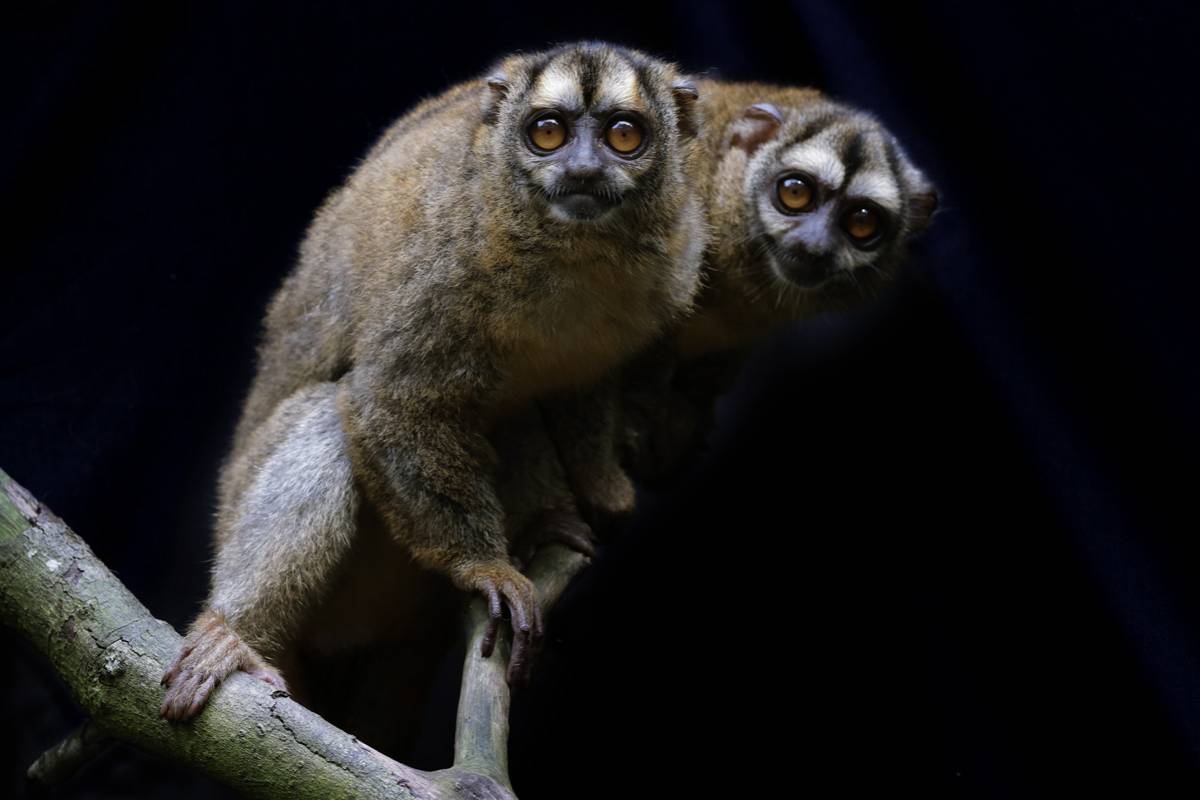 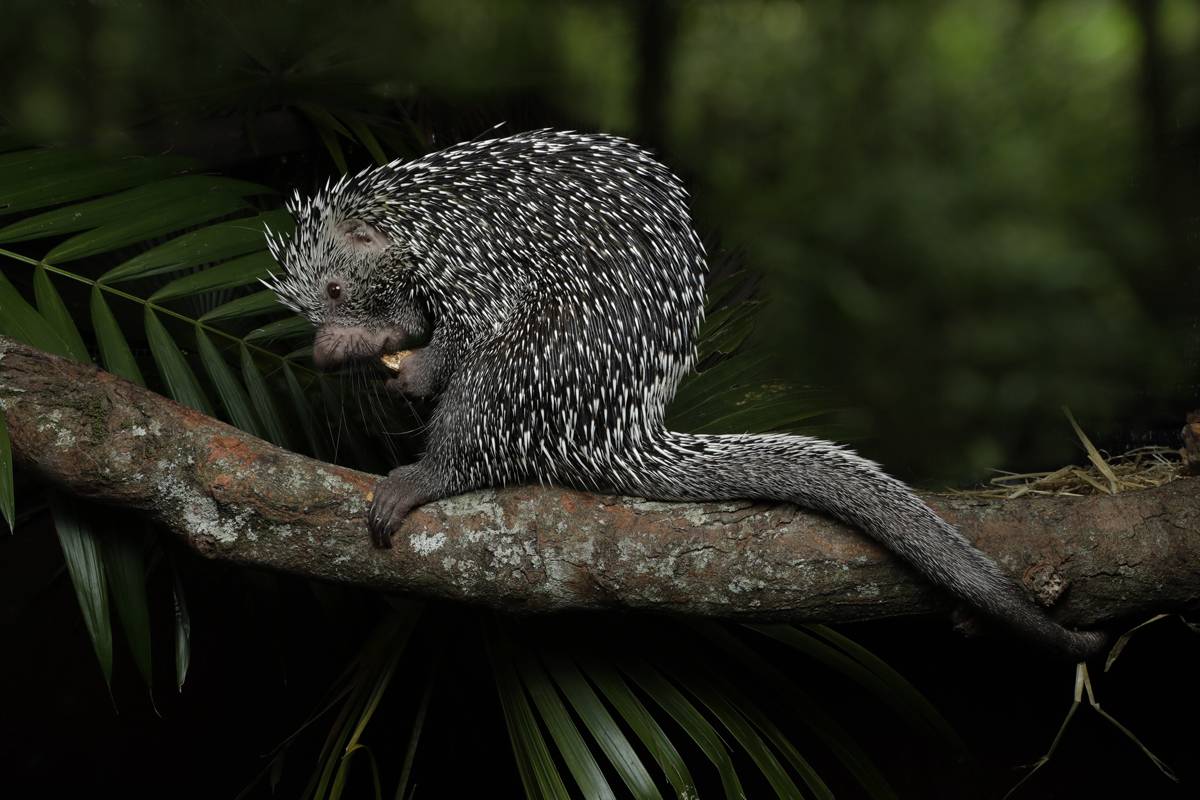 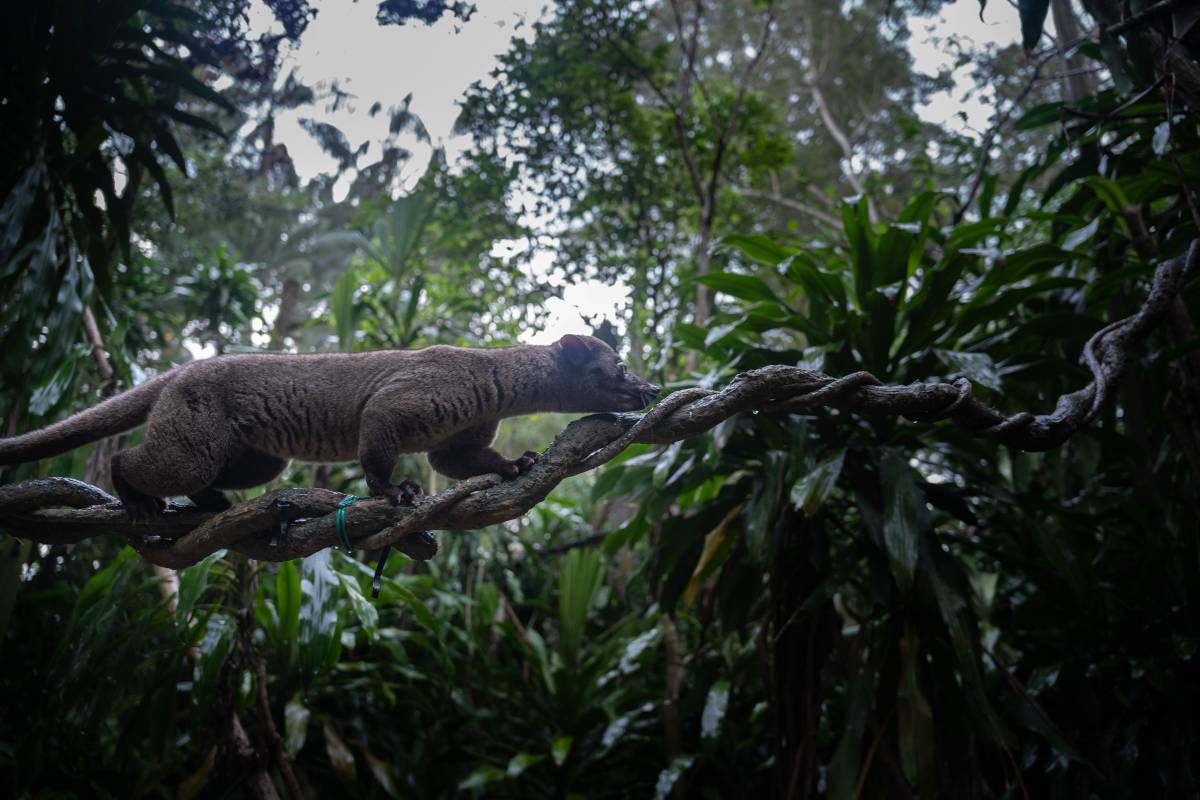 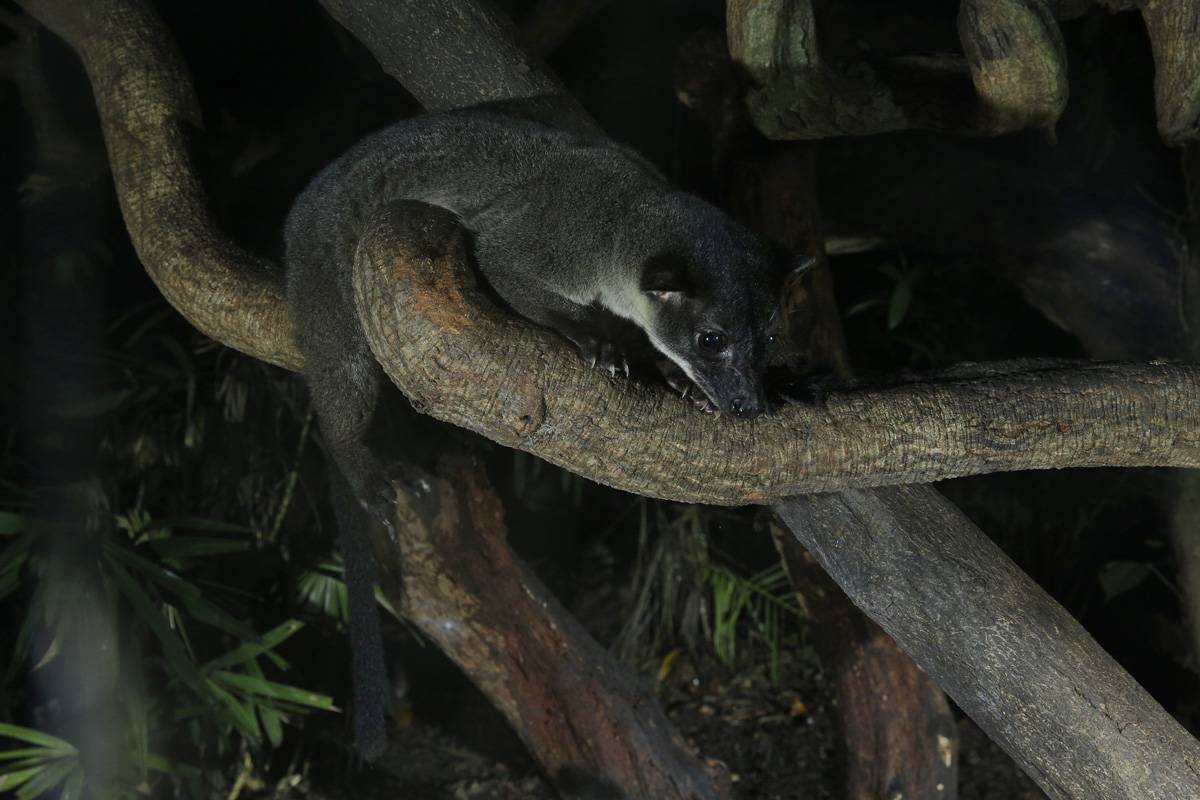 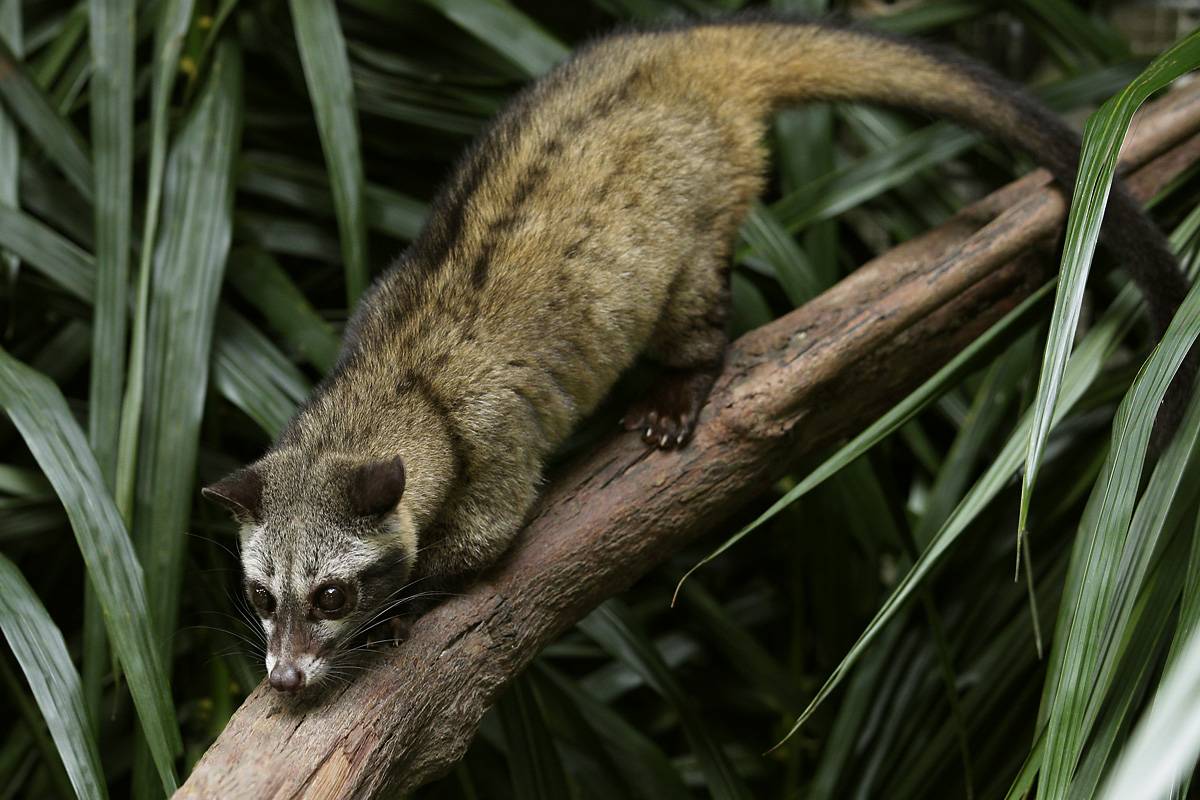 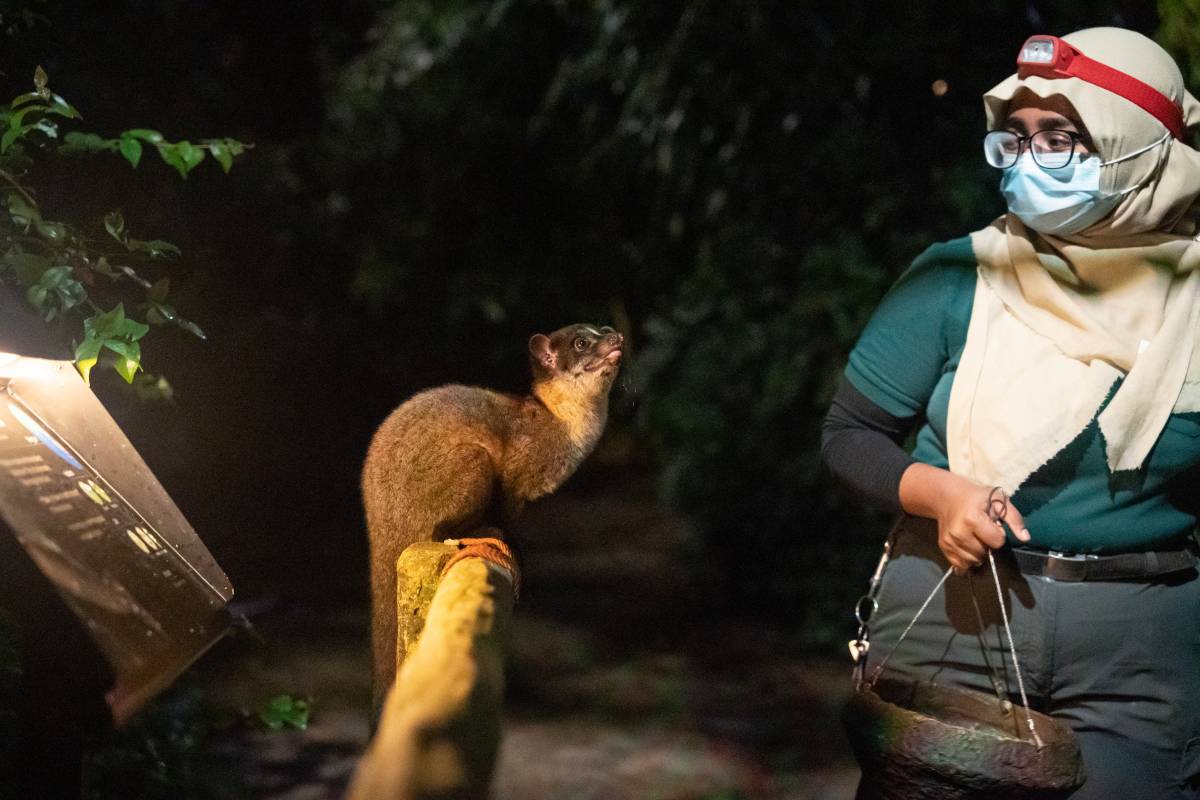 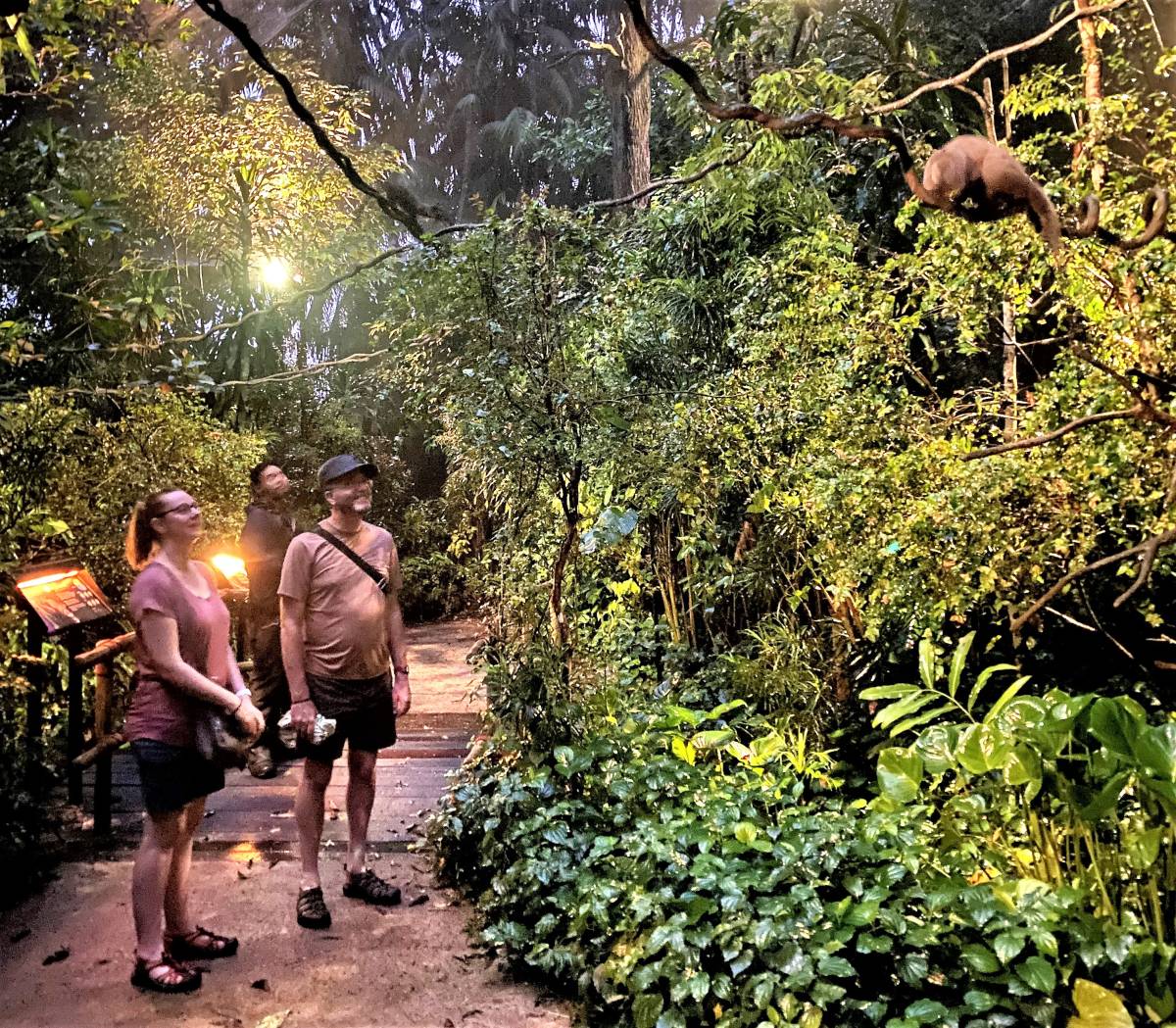 A pair of Grey-handed Night Monkeys will soon make their debut on Night Safari’s Fishing Cat Trail. Night monkeys are the only nocturnal monkeys in the world, and they are monogamous and mate for life. All photos courtesy Mandai Wildlife Group

(Singapore 8 June 2022) This June, visitors can look forward to exciting new wildlife encounters along Night Safari’s walking trails, including the park’s first walk-in exhibit for its civets and the debut of two new unique nocturnal mammals, the Brazilian Porcupine and Grey-handed Night Monkey.

A young Small-toothed Palm Civet looks on curiously as Night Safari keeper, Noor Najilah Binti Anifah prepares to hang a feeder with the civet’s favourite treats. Feeders will be hung strategically in brighter areas of the exhibits where guests can observe the animals.  Photo credit: Mandai Wildlife Group

Nestled in the Leopard Trail, the walk-in civet exhibit is the new home for seven Common Palm Civets and seven Small-toothed Palm Civets. Guests can explore the habitat which is abundant with trees, complemented by manmade vines and branches for the civets to showcase their natural climbing abilities. Civets are arboreal species and spend most of their time in trees. For guests to be able to observe the civets’ feeding and foraging behaviours up close, feeders are strategically hung in areas near the walkways throughout the 677sqm habitat.

It is safe for guests to share the same unobstructed space with the civets and signs are up to remind guests not to touch or feed the animals. Visitors are also reminded to stay on the designated pathways.

The Brazilian Porcupine spends most of its time in trees and uses its long prehensile tail to grip onto branches. A pair made their debut on Night Safari’s Fishing Cat Trail.  Photo credit: Mandai Wildlife Group

“Common Palm Civets and Small-toothed Palm Civets are species native to Singapore. Common Palm Civets are well-adapted to urban spaces and have been sighted in residential areas. Through the walk-in civet exhibit, we hope to deepen people’s appreciation of Singapore’s rich biodiversity and create awareness about co-existing with them,” said Saravanan Elangkovan, Deputy Vice President of Animal Care at Mandai Wildlife Group.

Common Palm Civets have a brownish coat, with irregular spots on their sides. The species has adapted to Singapore’s urban spaces and has been spotted in residential areas with fruiting trees.  Photo credit: Mandai Wildlife Group

At the Fishing Cat Trail, two species new to Night Safari, the Brazilian Porcupine and Grey-handed Night Monkey will take up residence in the new mixed-species habitat featuring small arboreal mammals native to South America. The Brazilian Porcupine has a characteristic prehensile tail the length of its body that helps with its climbing abilities while the Grey-handed Night Monkey is one of the few true nocturnal monkeys in the world. Grey-handed Night Monkeys are listed as Vulnerable under the International Union for Conservation of Nature (IUCN) Red List. A pair of Brazilian Porcupines has debuted in the Fishing Cat Trail exhibit while a pair of Grey-handed Night Monkeys will soon join them later this month. Both species were from zoos in Europe, under the European Studbook (ESB) programme recommendations. The ESB is an international studbook that issues breeding and transfer recommendations to ensure genetically diverse populations under human care. The Kinkajou, a small mammal related to Raccoons and Coatimundis, will also be sharing the exhibit.

Trees and additional man-made vines in the walk-in civet exhibit for the animals to harness when exhibiting their climbing abilities. Photo credit: Mandai Wildlife Group

Saravanan Elangkovan added, “The new habitat on the Fishing Cat Trail has been furnished with dynamic climbing features such as vines and swinging branches for the animals to exhibit their natural behaviours. Being in a mixed species habitat promotes cross interactions amongst the individuals and stimulates them mentally and physically.”

Nearly three decades since becoming the world’s first nocturnal zoo, Night Safari has continually innovated to ensure high standards of animal care and welfare while educating people about the world of wildlife and inspiring them to co-exist with animals and nature. In April this year, Night Safari received the prestigious Thea Classic Award 2022 from the Themed Entertainment Association for innovative experiences and continued excellence across 28 years of operations.