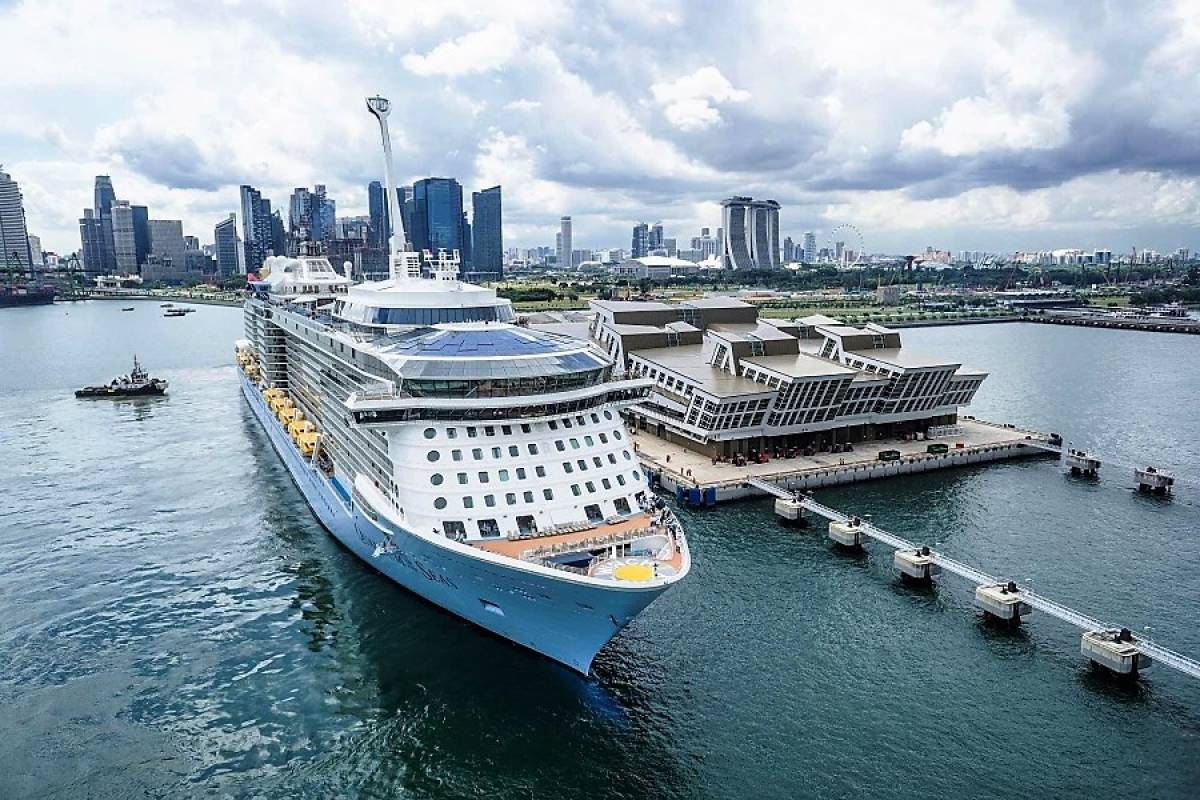 The Singapore-homeported Ovation of the Seas

SINGAPORE, 6 MARCH 2017: Royal Caribbean International today announced that it has entered a second multi-million dollar marketing partnership with the Singapore Tourism Board and Changi Airport Group. The collaboration will promote cruising out of Singapore to overseas guests on Royal Caribbean’s Ovation of the Seas and Voyager of the Seas.

The partnership is underpinned by news of the cruise brand’s longest-ever deployment of ships in Singapore from 2017 to 2019.

According to the Singapore Tourism Board, this latest tripartite partnership is projected to generate over S$26 million in tourism dollars. It is also expected to bring in around 45,000 overseas fly-cruise guests to Singapore to sail on Ovation of the Seas and Voyager of the Seas from March to June 2017. This is in addition to the current 65,000 overseas guests projected to sail on Mariner of the Seas from October 2016 to March 2017. The partnership can be extended into subsequent years.

To kick off the partnership, Ovation of the Seas arrived for her inaugural season in Singapore today, with 10 sailings to take place during this season. According to Royal Caribbean, more than half of the ship’s bookings have come from overseas, with the five- and 12-night sailings proving to be popular given more exotic destinations offered on these itineraries.

Sean Treacy, Managing Director, Asia Pacific of Royal Caribbean Cruises Ltd. said, “This tripartite partnership is a tremendous boost for our first Ovation of the Seas season in Singapore as we deepen our commitment to this region with even more attractive cruise products. The signing of this new partnership also marks another milestone in our 10thyear here in Asia and we look forward to growing the fly-cruise market together with Singapore Tourism Board and Changi Airport Group.”

The cruise brand’s first collaboration with Singapore Tourism Board and Changi Airport Group has been in place with Mariner of the Seas since August 2015. Projected to bring in over 170,000 overseas fly-cruise visitors to Singapore over three years, the first year’s numbers surpass the annual visitor target by over 40 per cent.

Coupled with the optimistic outlook for cruise tourism in Asia, which witnessed double-digit growth in cruise capacity and became a source market in recent years[1], this partnership promises significant economic impact to Singapore.

Said Ms Annie Chang, Director, Cruise, Singapore Tourism Board: “This second collaboration with Royal Caribbean International and Changi Airport Group reiterates our commitment to grow Singapore’s cruise industry and position Singapore as the fly-cruise hub of Asia. That Royal Caribbean is increasing its homeported sailings in Singapore also signals the success of our partnership in driving cruise tourism for Asia – a long-standing relationship we’ve had for the past 10 years.”

With Changi Airport’s strong air connectivity to more than 380 cities worldwide and around 7,000 flights each week, Singapore is well placed to effectively tap into fly-cruise traffic and serve as a cruise hub for the region.

Mr Peh Ke-Wei, Changi Airport Group’s Vice President of Passenger Development, said,“We are delighted to enter into a second tripartite collaboration with Royal Caribbean International and Singapore Tourism Board. Fly-cruise traffic has performed well in recent years, and Changi Airport seeks to further grow this segment together with our partners, as part of Changi Airport’s aim to grow different passenger segments in Singapore. With these new offerings, visitors to Singapore will have more travel options. Looking ahead, we seek to bring even more new and exciting experiences to our passengers.”

“The announcement of Royal Caribbean's longest deployment for the next three years is a reflection of how multi-sector collaborations like these are vital to developing the local and regional cruise industry. It is these partnerships that enable Royal Caribbean to bring bigger and more innovative ships to Singapore, enhancing the cruise experience for travellers and ultimately growing the industry here,” said Mr Treacy.