Explore Your Own Backyard Along NHB's Heritage Trails 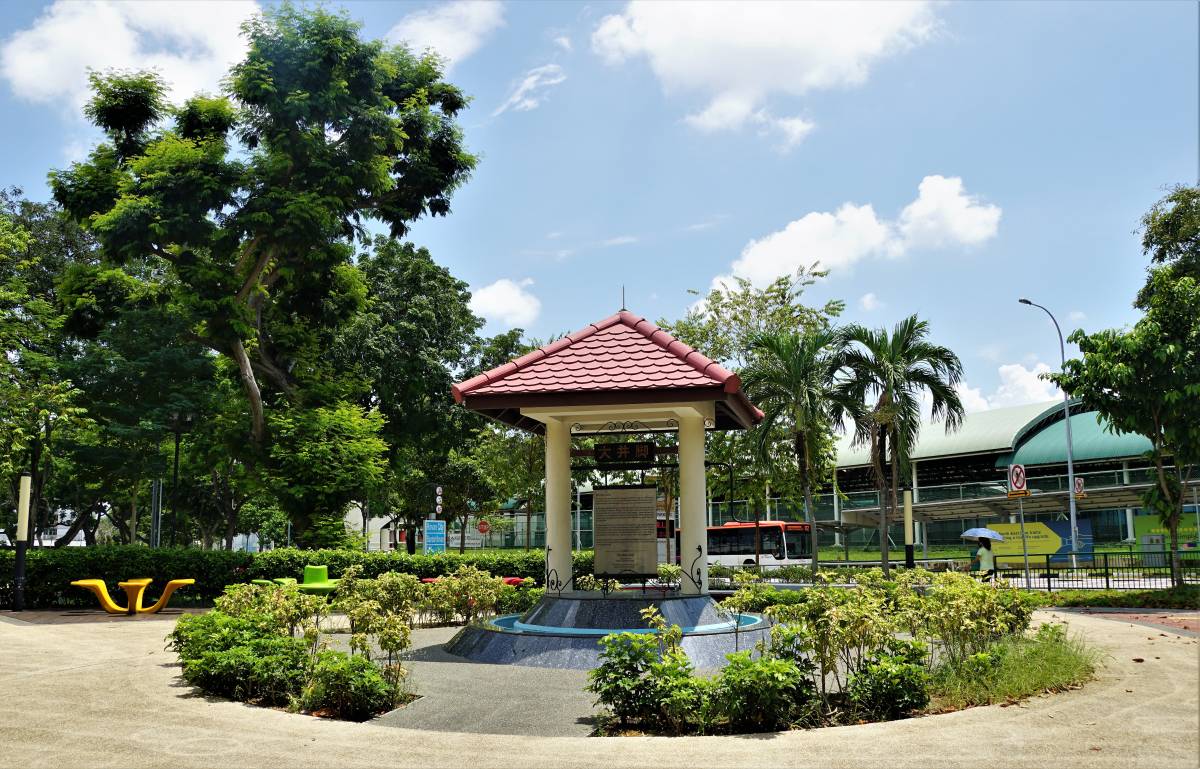 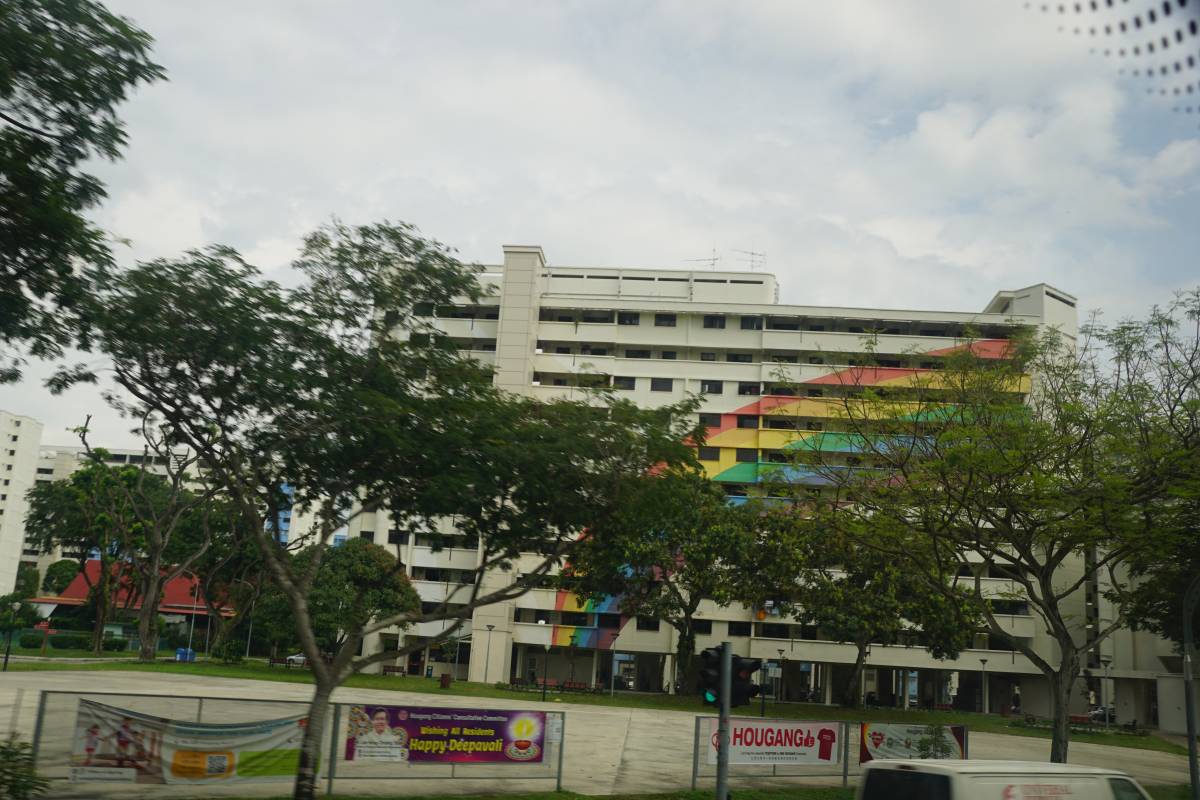 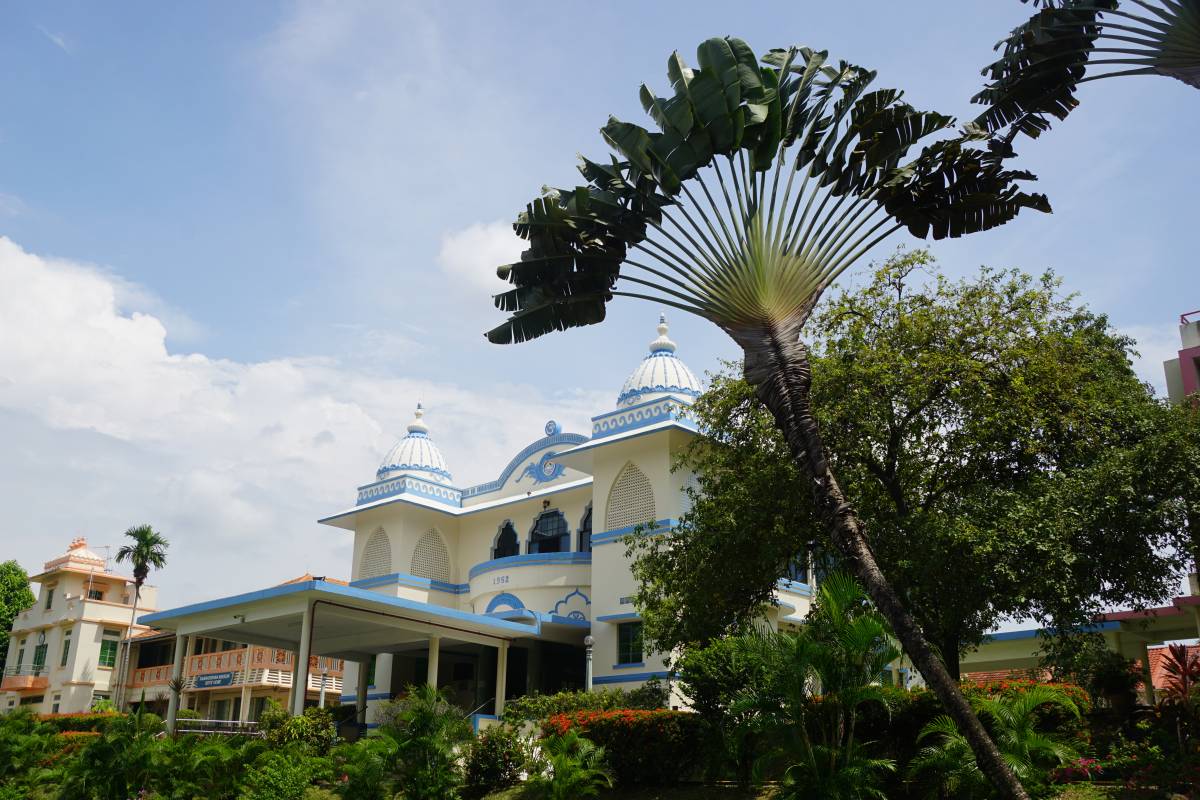 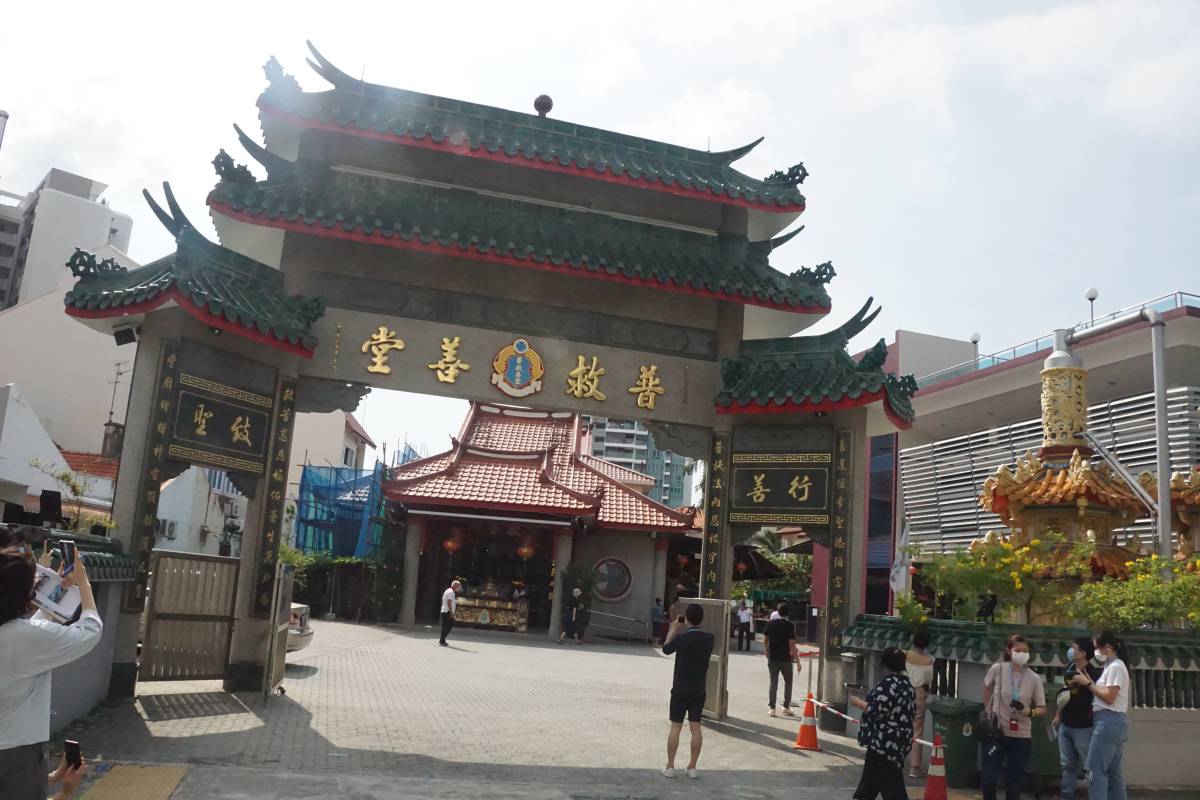 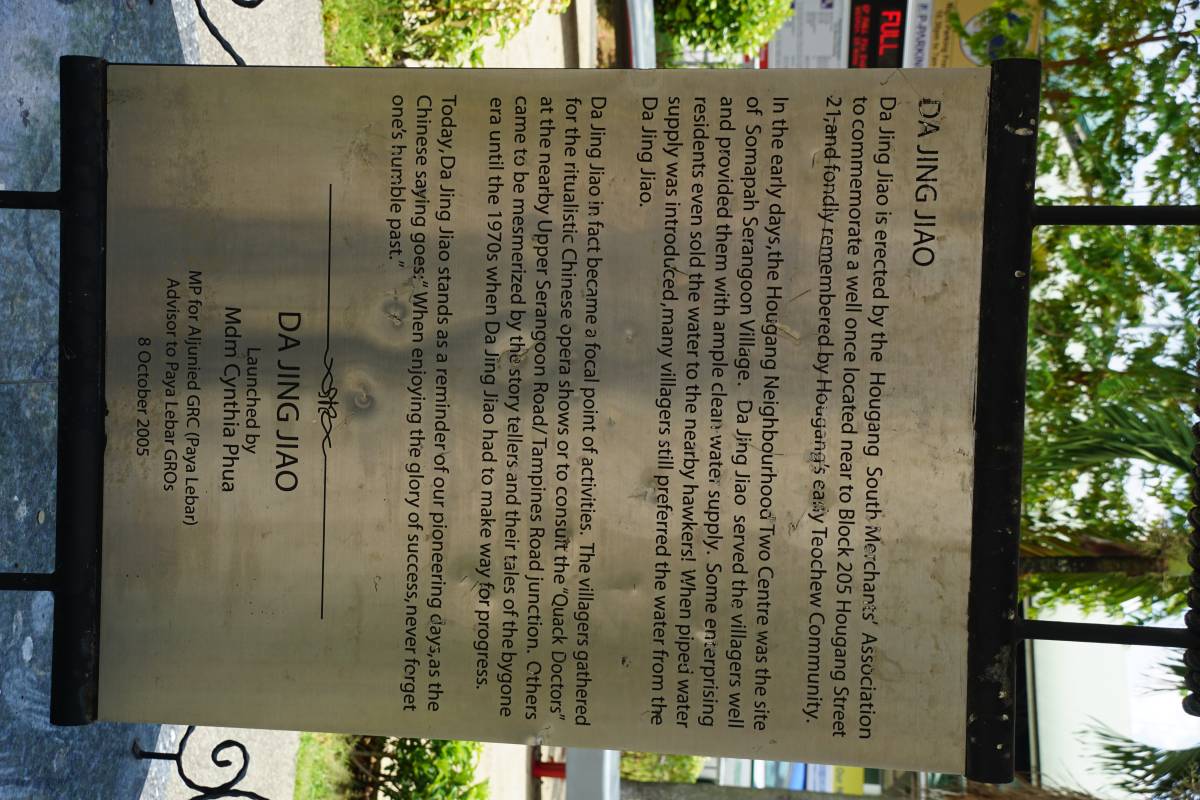 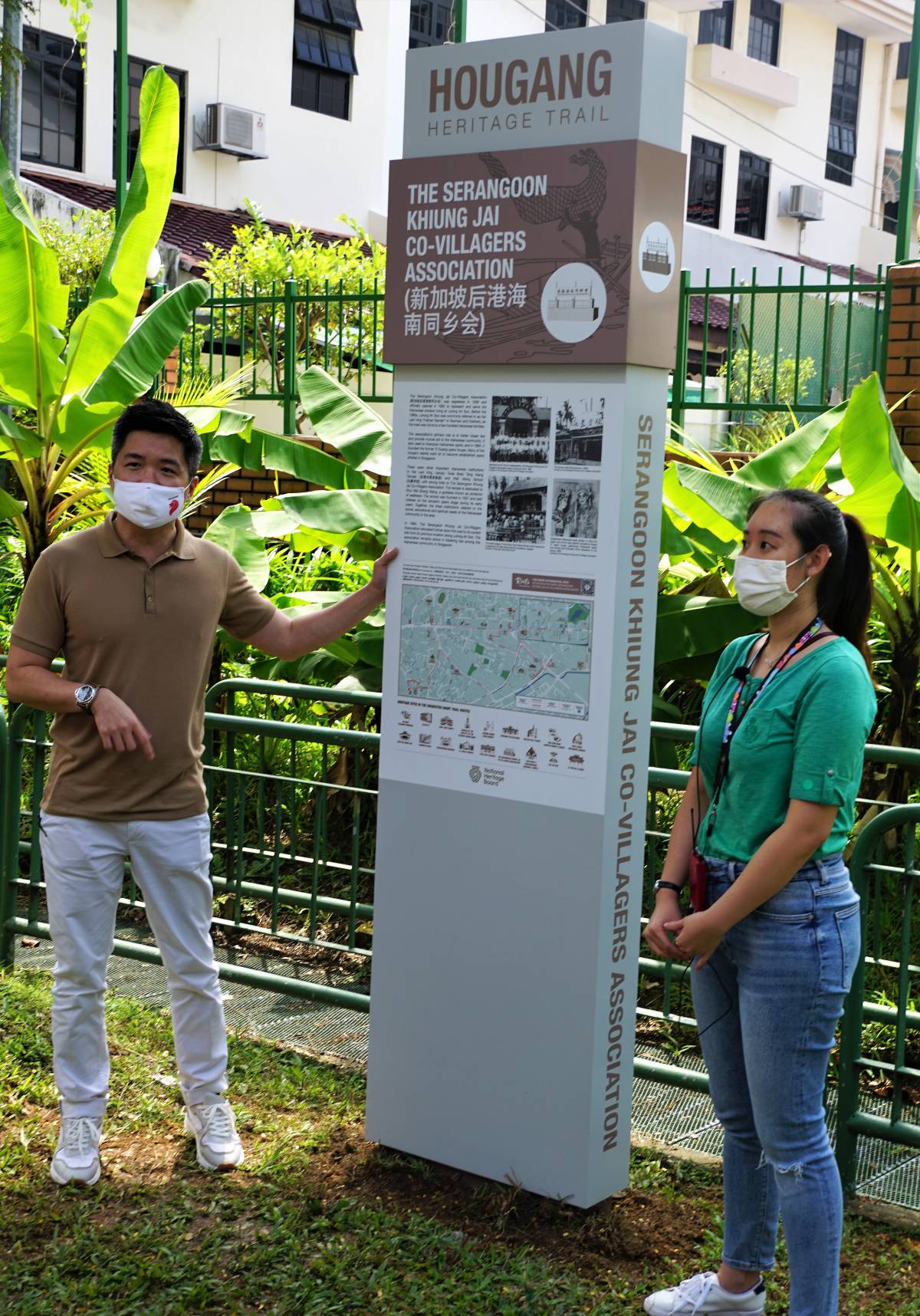 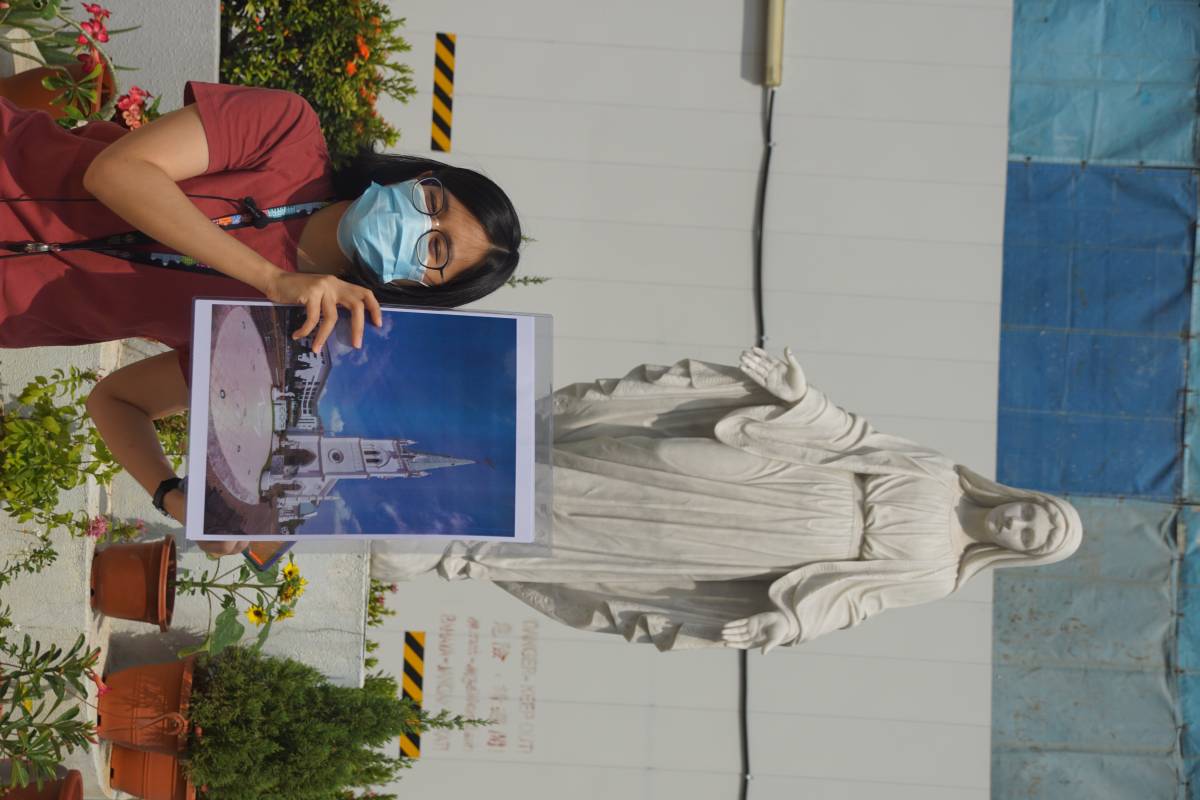 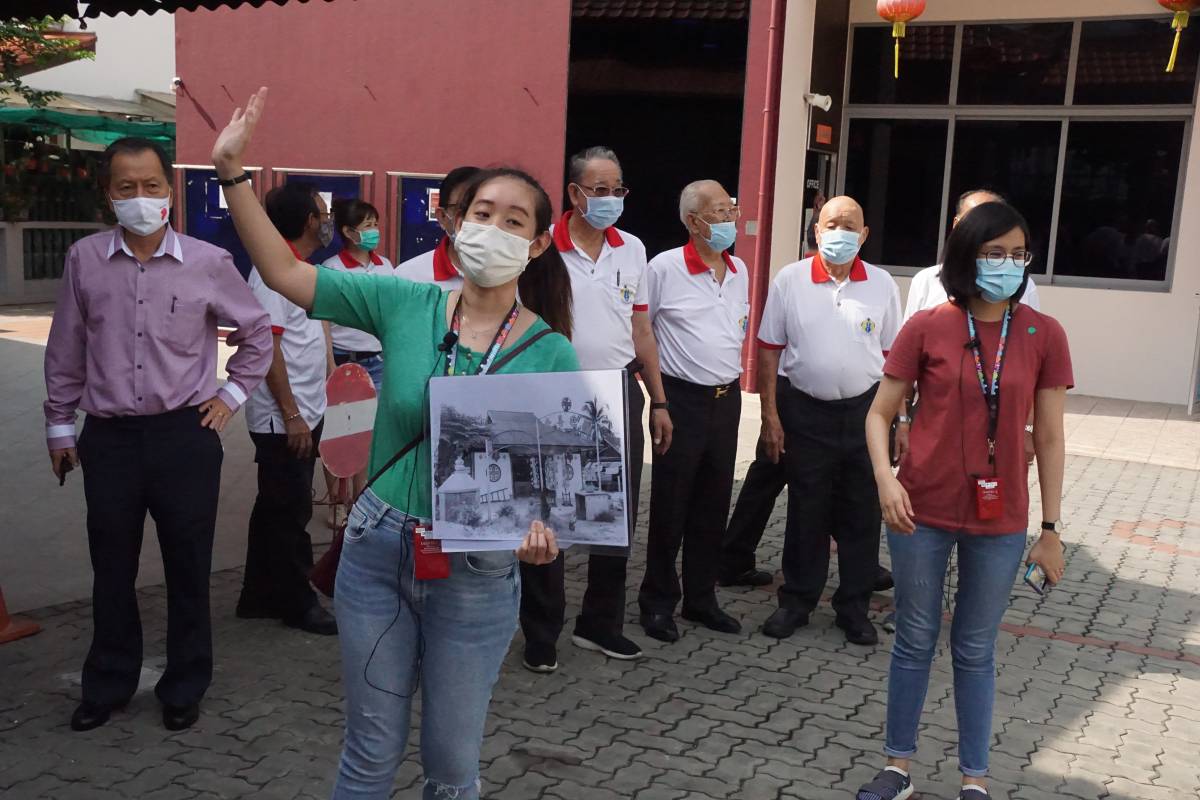 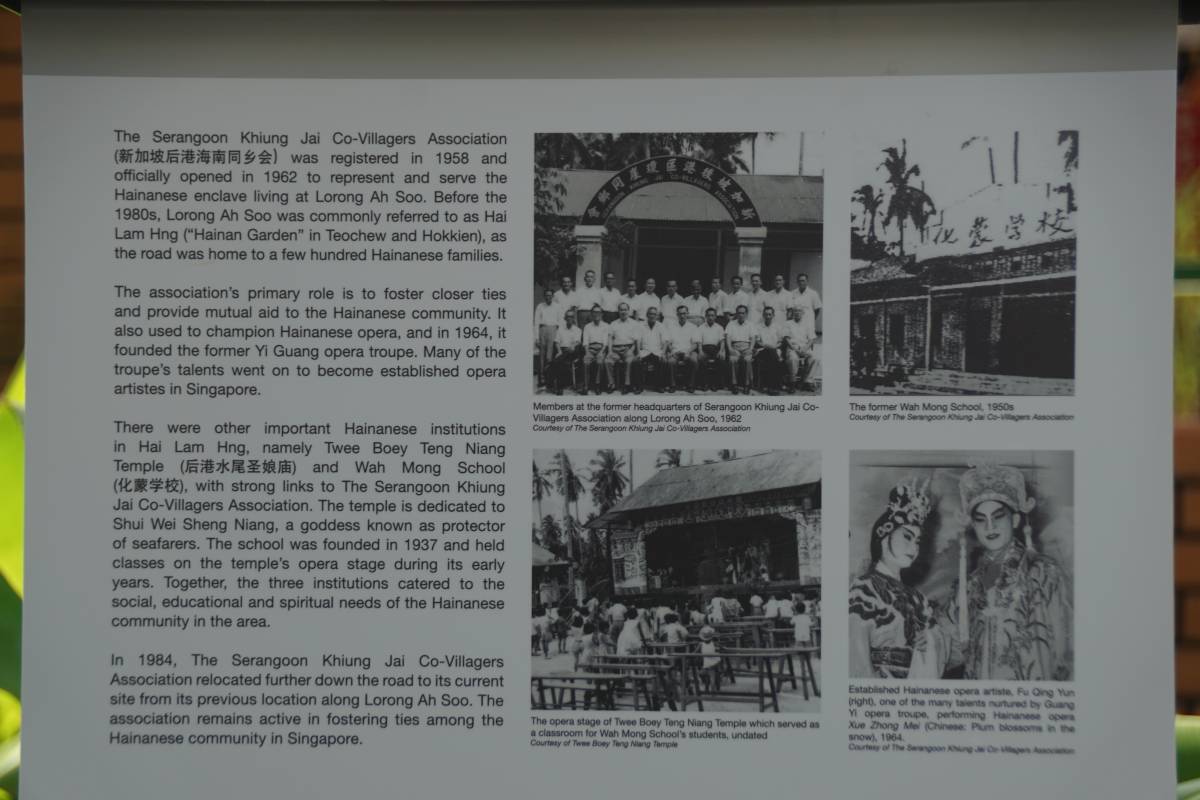 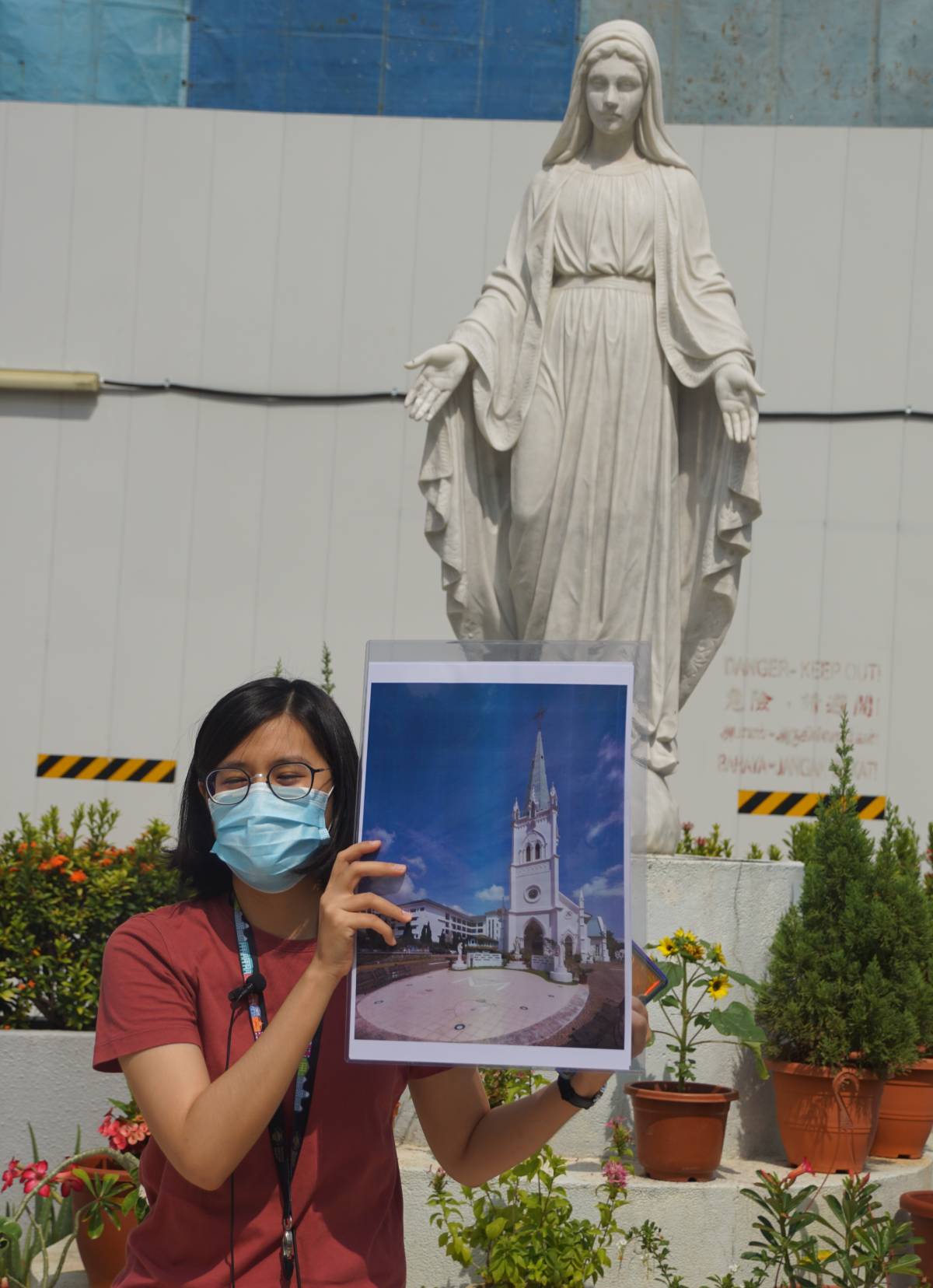 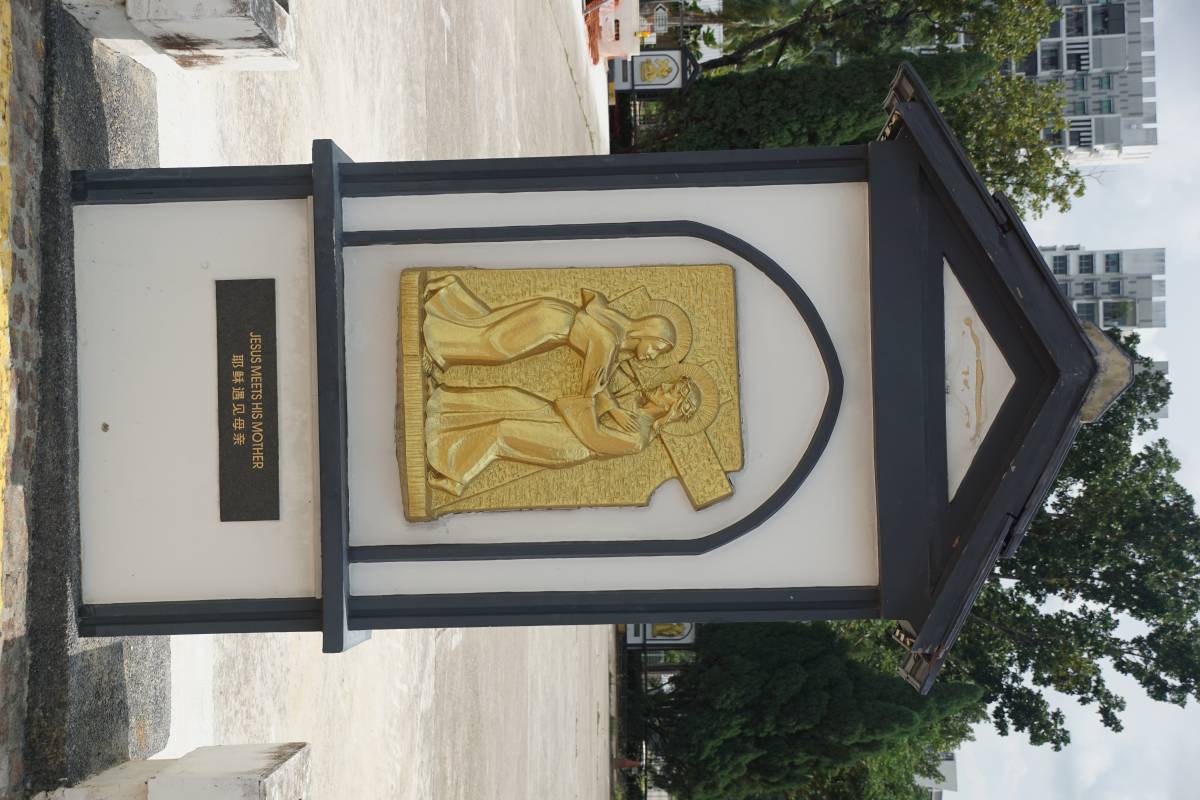 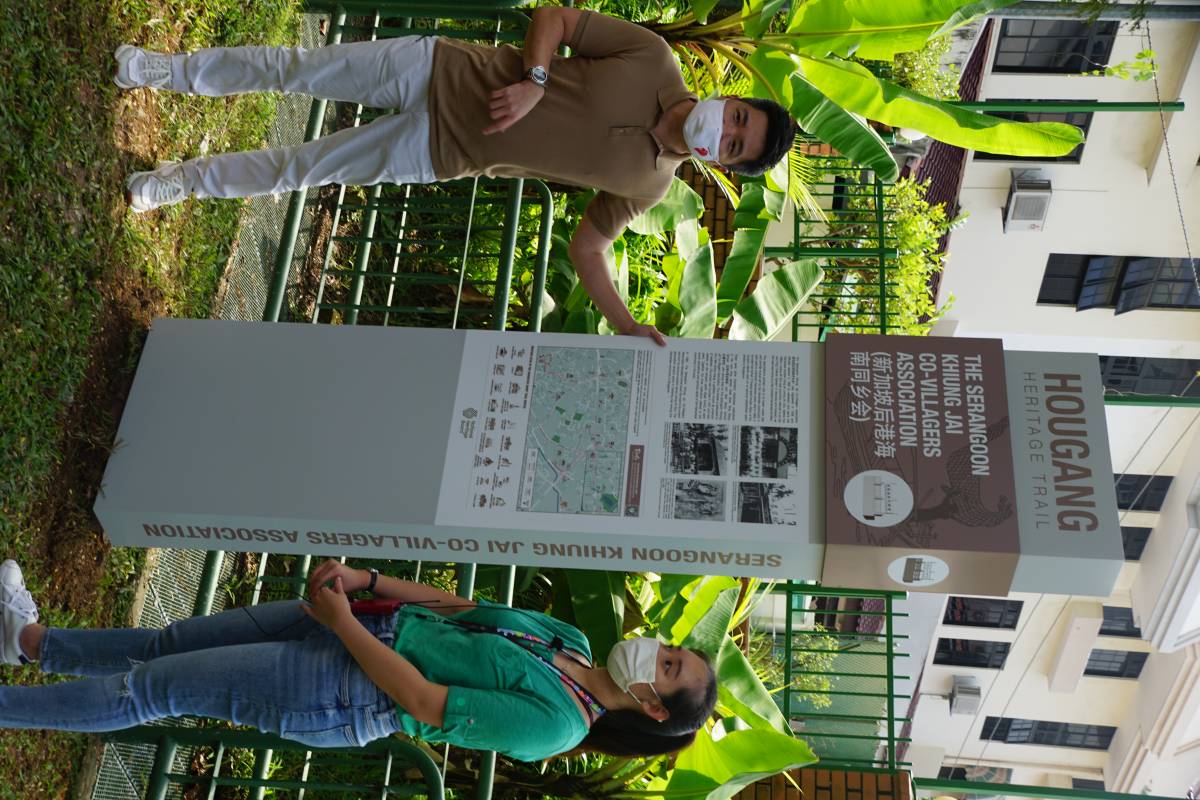 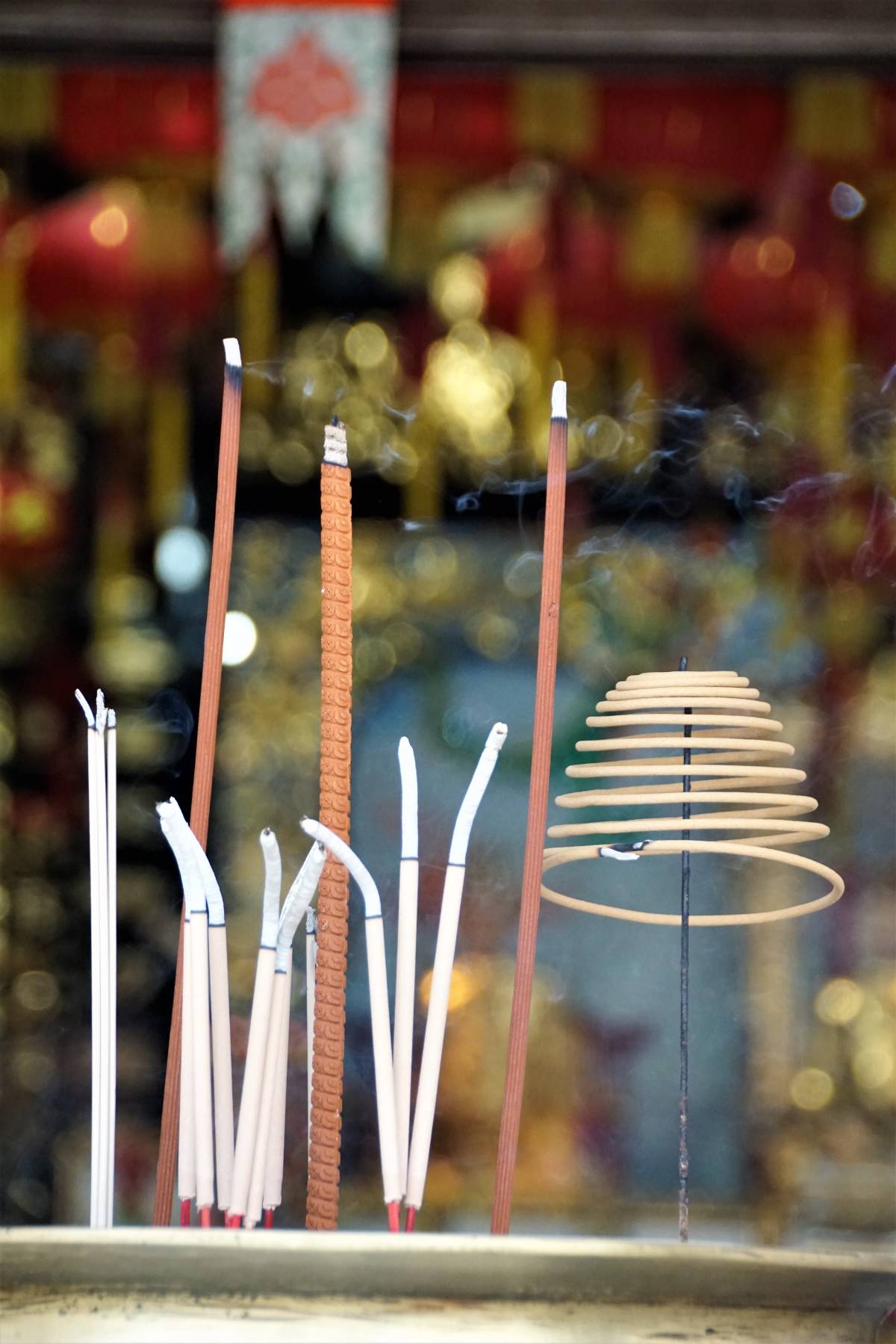 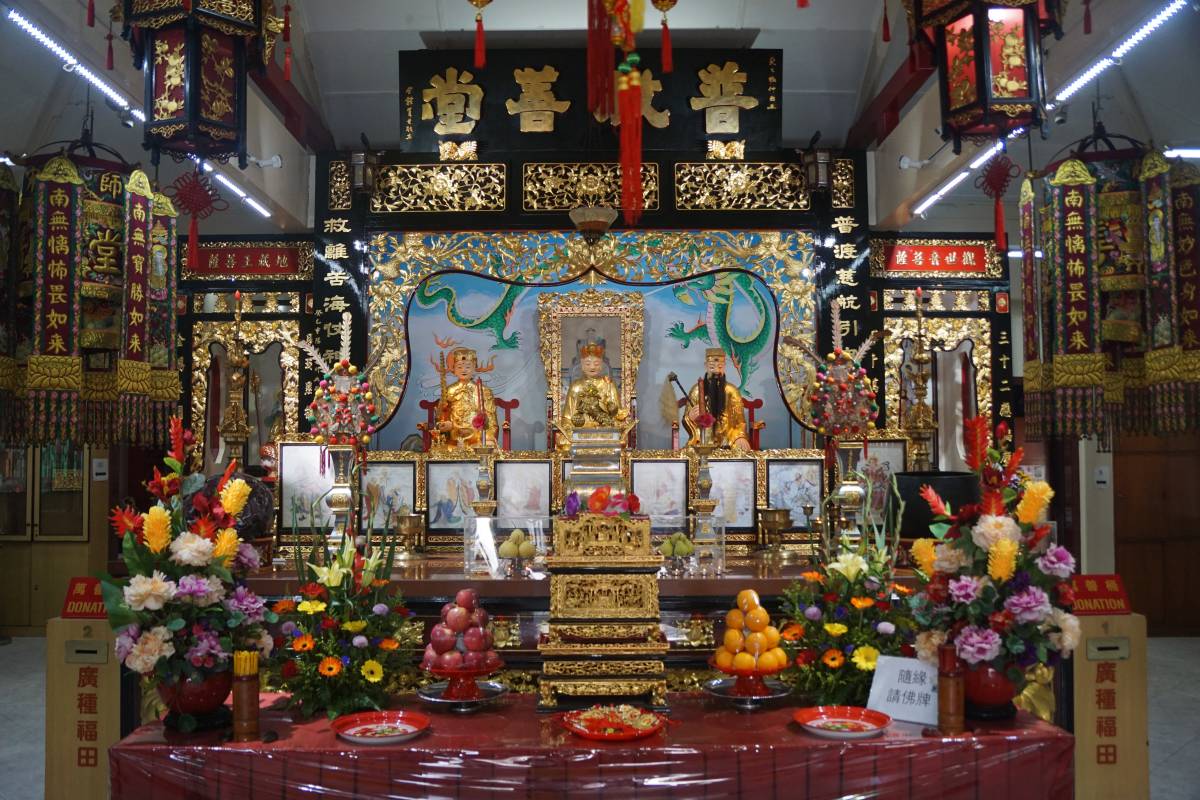 While tales of crocodile and pirate attacks may sound exciting there is much more that is interesting about the National Heritage Board’s (NHB) new Hougang Heritage Trail, writes Floyd Cowan.  Consisting of 18 heritage sites with 10 trail markers, the Trail reveals a treasure trove of lesser-known stories of an area steeped in history.  The Hougang Heritage Trail has three thematic trail routes: Landmarks of Hougang, Institutions of Service and Architectural Gems. Through historical landmarks, important community institutions, as well as the personal memories and contributions from the community, the trail charts the journey of Hougang from a rural area with vast plantations and fruit orchards to a modern, thriving heartland estate.

We met for a Press Tour at the Tua Jia Kar communal well replica (pavilion in front of Block 203) Block 203, Hougang Street 21 (pictured top) with a team from the NHB who showed us photos and gave us the significance of the locations we visited.

Had you asked me where the oldest of Singapore’s communities were it is unlikely I would’ve picked a spot in the middle of the heartlands (there is even the Heartlands Mall there, near the Kovan MRT station). Most of the area was covered gambier and pepper plantations that gave way to coconut plantations and orchards. Why did a community spring up here? The long straight Serangoon Road was cut through the wilderness to link the settlement of Singapore to the Johor Strait and the short distance across the water to the Malay peninsula.

While Upper Serangoon Road headed north along the western side of the ever-widening Serangoon River Tampines Road served the people on the eastern side – their only road through what could be a very swampy and difficult terrain. Where the two roads met, near the well, a market sprang up and the community took root. Teochew and Hokkien settled here and left their mark on the culture and built heritage. Perhaps not so much on the McDonalds that opened in 1984, that was the first fast food outlet in the area, but certainly on places of worship, food and businesses.

The area is referred to as both Au Kang and Hougang. Au Kang means ‘at the back of the river’ in Teochew and Hokkien, and is a reference to Sungei Serangoon at the end of Upper Serangoon Road, around which many Teochew-speakers settled. The first documented use of this dialect name dates to 1856. “Hougang” its Mandarin version, was introduced in 1980 for the new residential town which was being built at the time – with its historic McDonalds. While the old Teochew pronunciation has endured and the Teochew community continues to have a strong presence, much has changed. A strong, diverse mix of other communities and cultures has developed accentuates the colourful character of one of Singapore’s oldest towns.

Travelling on an airconditioned bus we darted from site to site in what is a surprisingly large area. Our tour might have been dubbed religious sites of Au Kang as most of our stops were at places of worship. This tour should have included McDonalds but as we caught the bus in the parking lot adjacent to the historic site, there was no need to stop in and have a look as we did at Hougang Tou Mu Kung.

Began as a shrine in Lim Loh village in 1902 Hougang Tou Mu Kung is the oldest temple in Singapore dedicated to the Nine Emperor Gods. The Nine Emperor Gods were popularly worshipped in Malaya, especially among Chinese labourers working in tin mines, as they were believed to be efficacious in warding off epidemics and diseases. The temple was gazetted as a National Monument on 14 January 2005, and remains well known for its grand celebrations during the annual Nine Emperor Gods festival. The shrine is one of two sites in Hougang that is a National Monument.

Our next stop was also gazetted as a National Monument in 2005. The Church of the Nativity of the Blessed Virgin (right) was located at the end of Au Kang when it was first built, and  is the oldest place of worship in the area. With a growing congregation in the late 1890s, the mission constructed the present-day Neo-Gothic building, complete with pointed arches and ribbed vaults. The church will continue to provide religious services in Teochew once the pandemic is over and the restoration works are complete – expected to be in July 2021. On our arrival the building was completely covered as work has recommenced after the Circuit Breaker.

We drove past, but didn’t stop, at the Instagramable Block 316 at Houngong Avenue 7, with a rainbow mural on its exterior.  Another HDB block was pointed out for its distinct architectural style. The curved columns and corners were incorporated in the housing estate to make it distinct from other housing estates in the city.

We stopped outside, but didn’t go in, the Serangoon Khiung Jai Co-Villagers Association. It served the Hainanese enclave that lived in Lorong Ah Soo and still nurtures Hainanese culture.

Our final stop was the Ramakrishna Mission on Bartley Road where they built a boy’s home for destitute boys who had been orphaned by the war. In 1954 it added a temple on the grounds for the devotees of Sri Ramakrishna. The blue and cream building is modelled after the mission’s main temple in West Bengal and integrates architectural features and motifs from different religions, such as Buddhism and Islam. This mix of cultural features reflects the mission’s belief that all religions lead to the same goal of enlightenment.

“Through our new Hougang Heritage Trail and our other trails,” Mr Alvin Tan, Deputy Chief Executive (Policy & Community), National Heritage Board (NHB) said, “we hope to encourage Singaporeans to explore their own backyards during this period of travel restrictions, and rediscover local heritage delights. In doing so, we hope that Singaporeans will come away with a renewed appreciation of what Singapore has to offer in terms of unique heritage experiences with a strong local appeal.”

The Hougang Heritage Trail, which has a great deal more than conveyed here, is the twentieth NHB Heritage Trail. More are in the works and being planned. With the companion guidebook you can do a self-guided tour and learn about the history of the area that is somewhat concealed by modern developments.