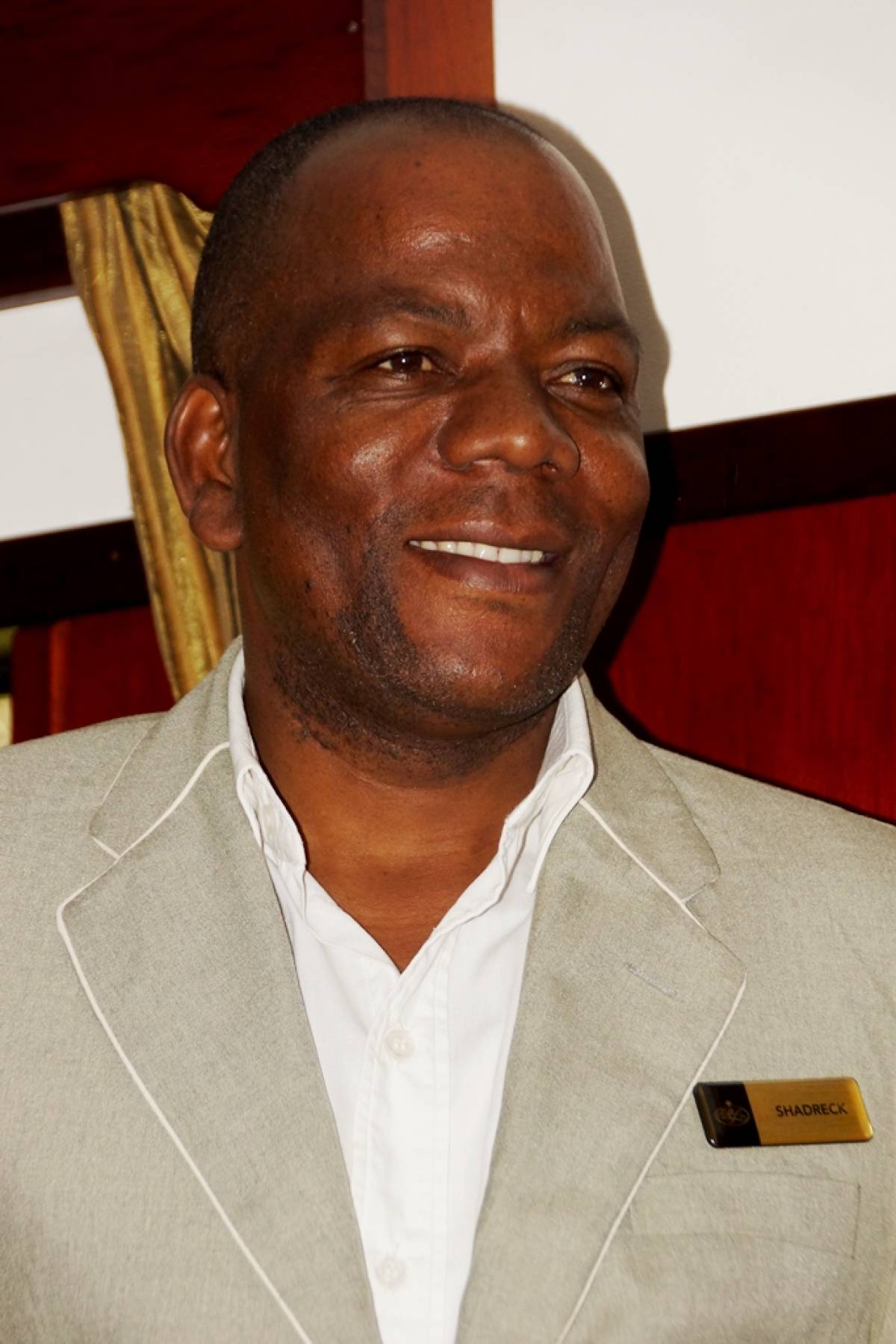 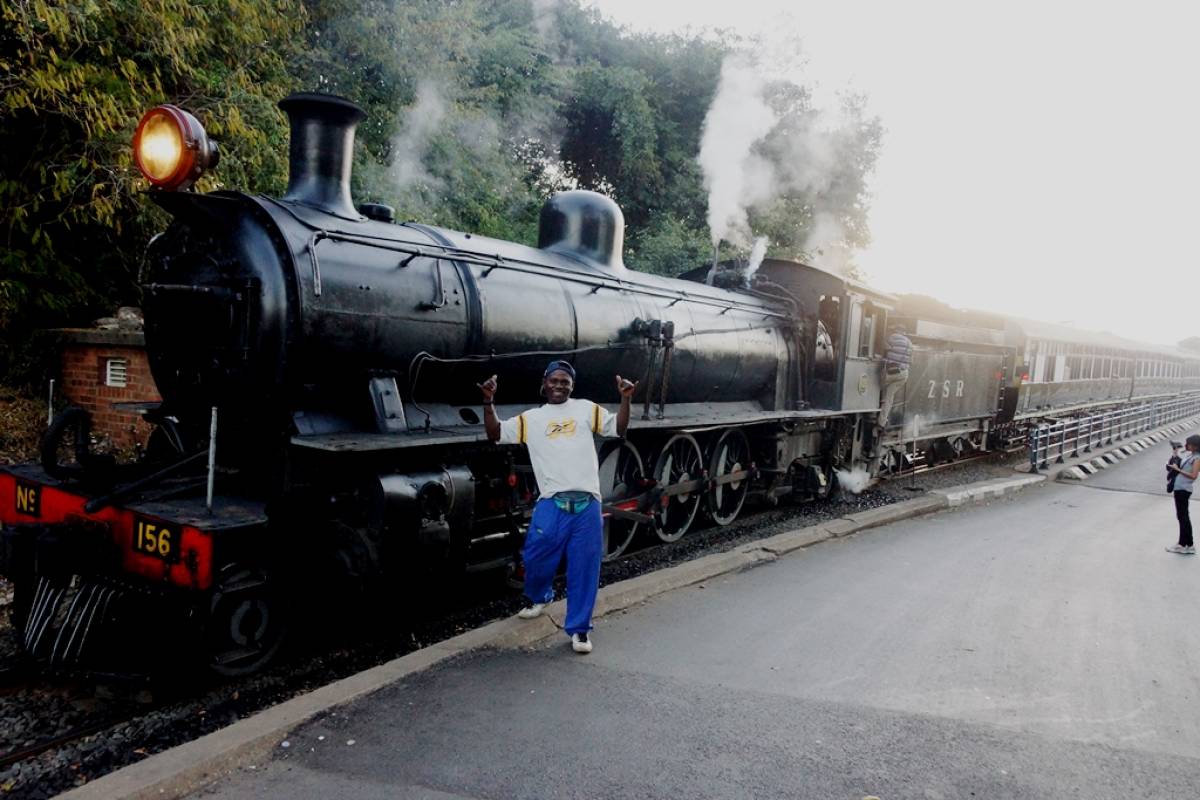 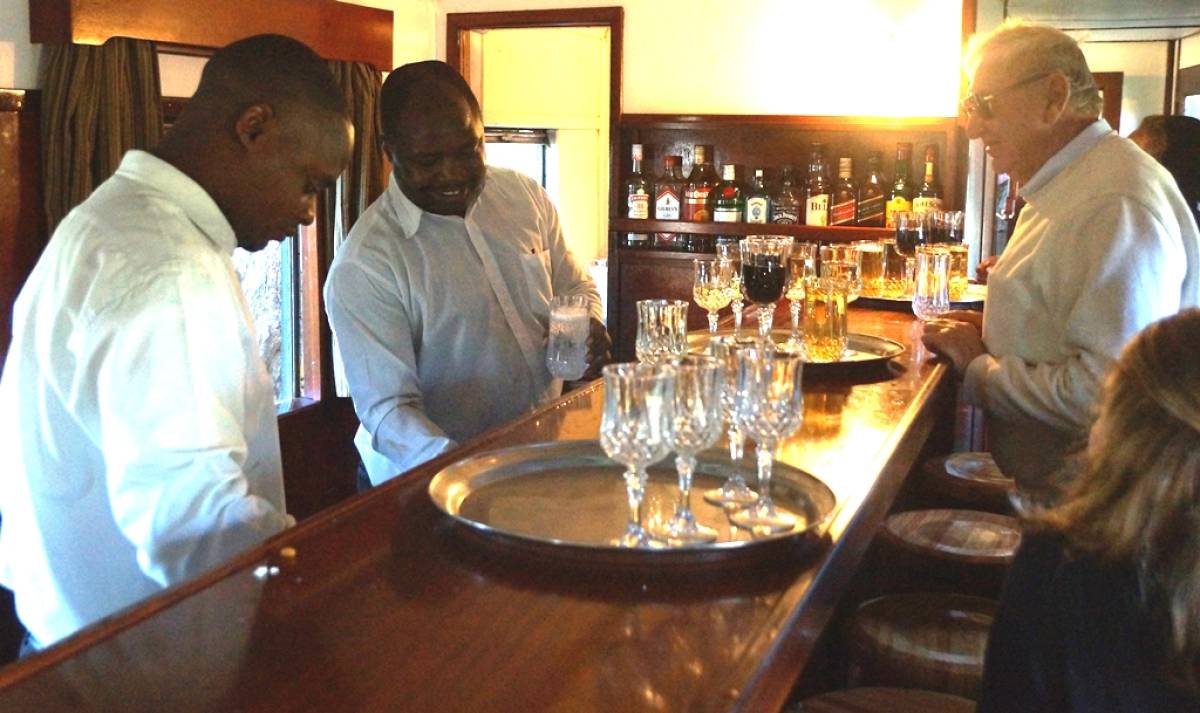 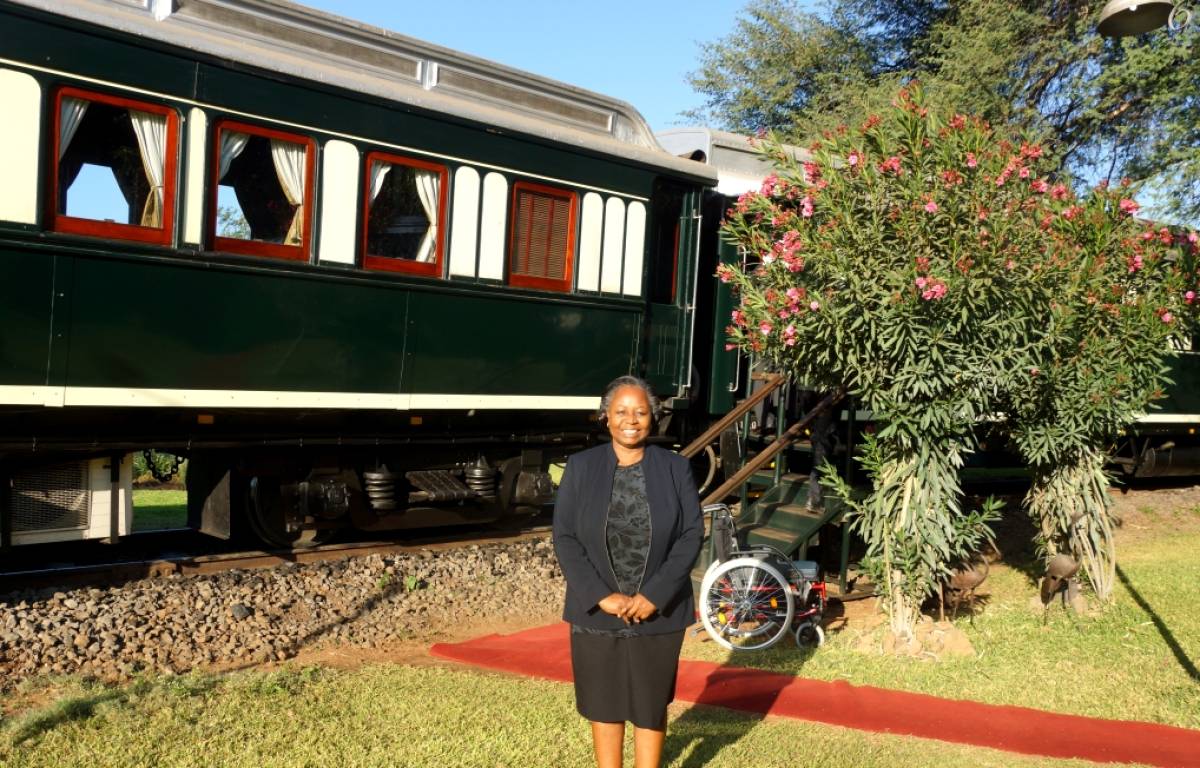 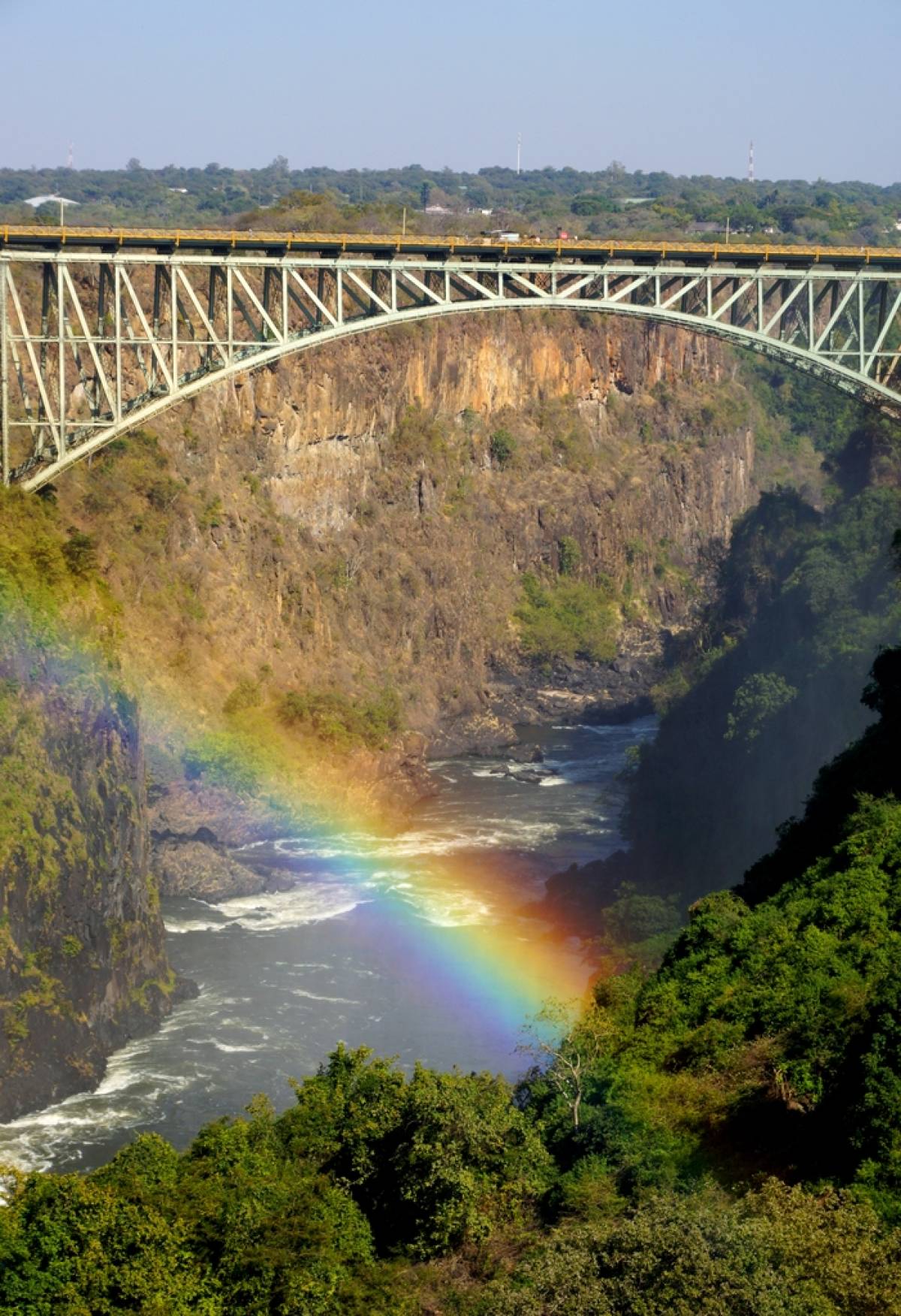 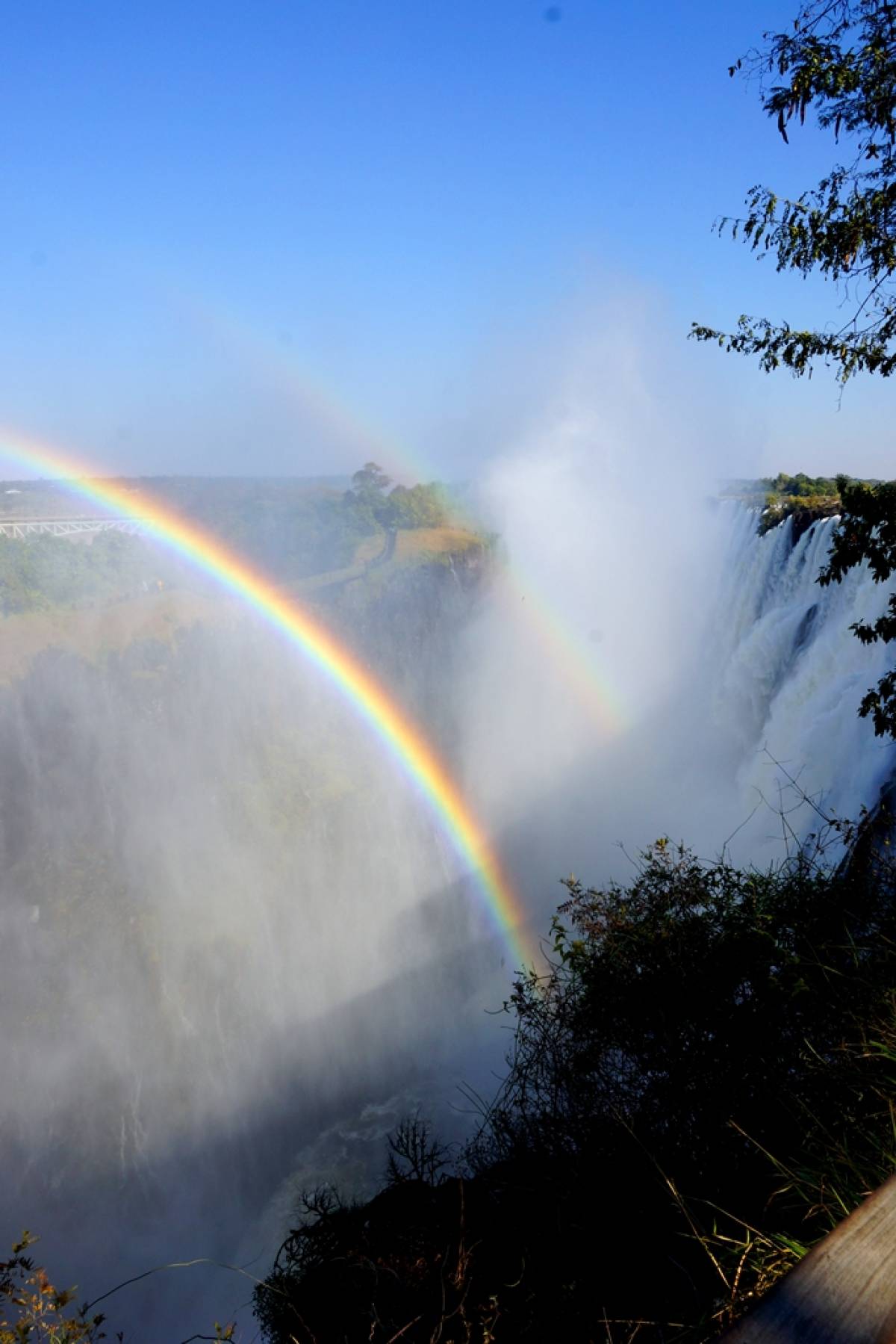 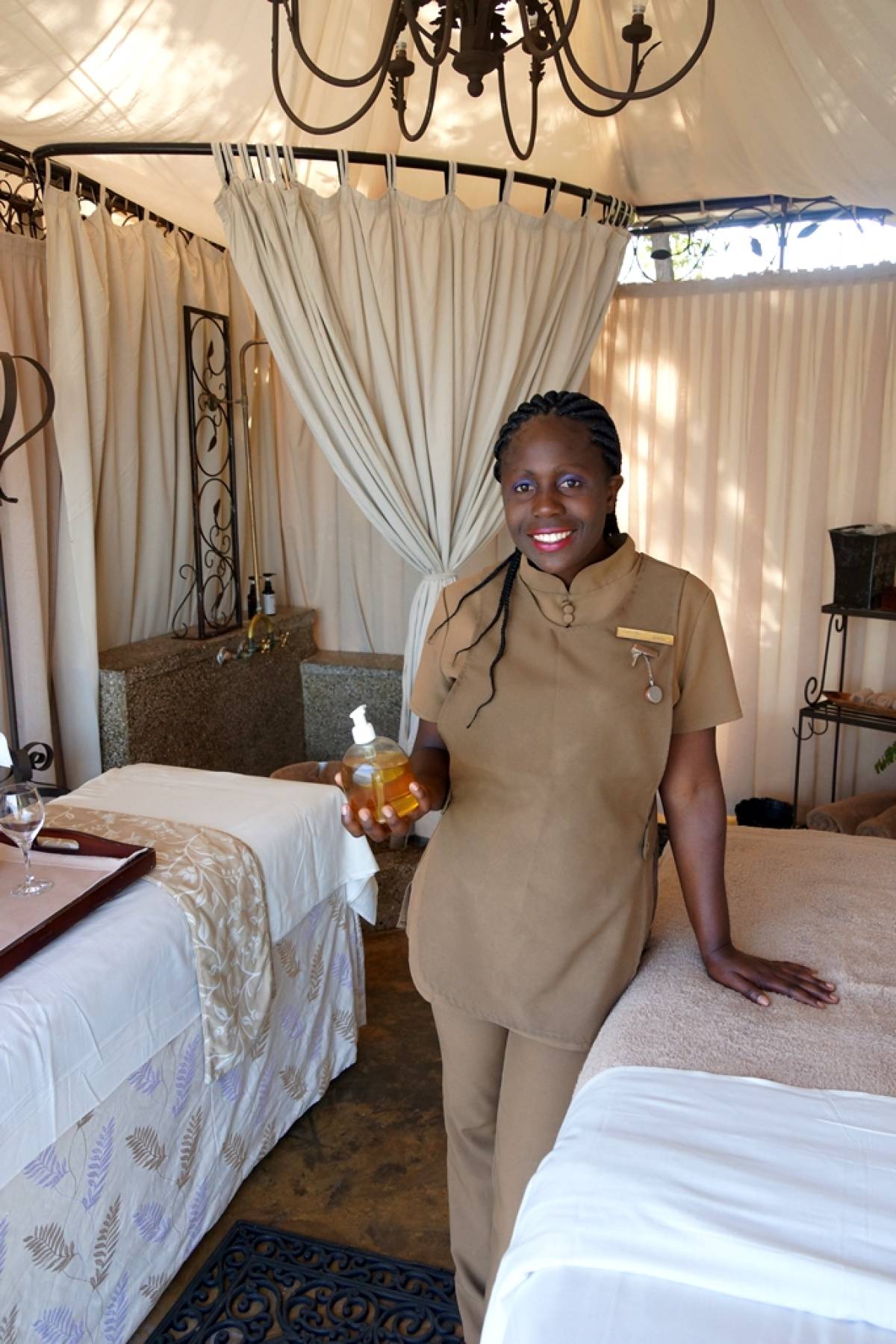 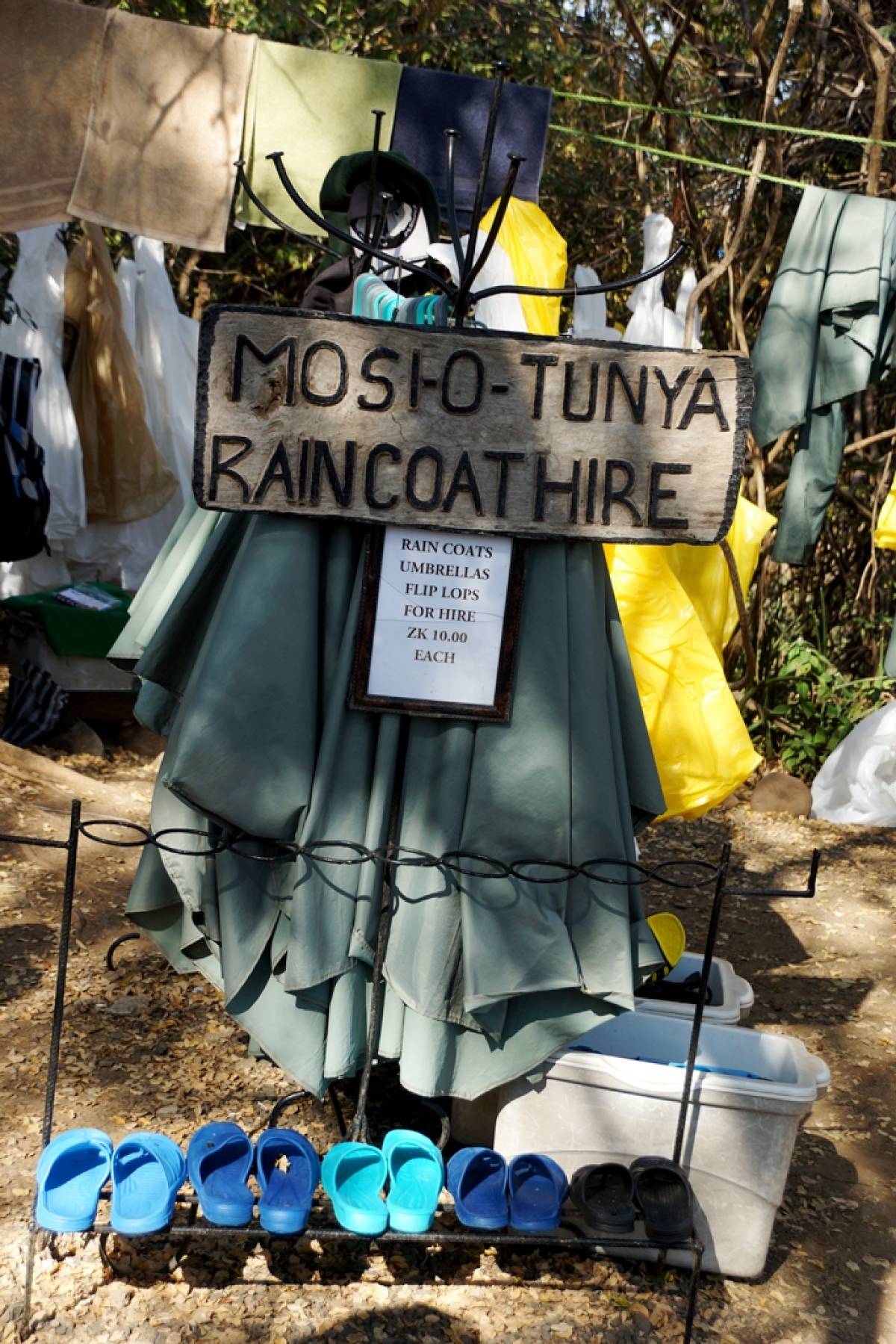 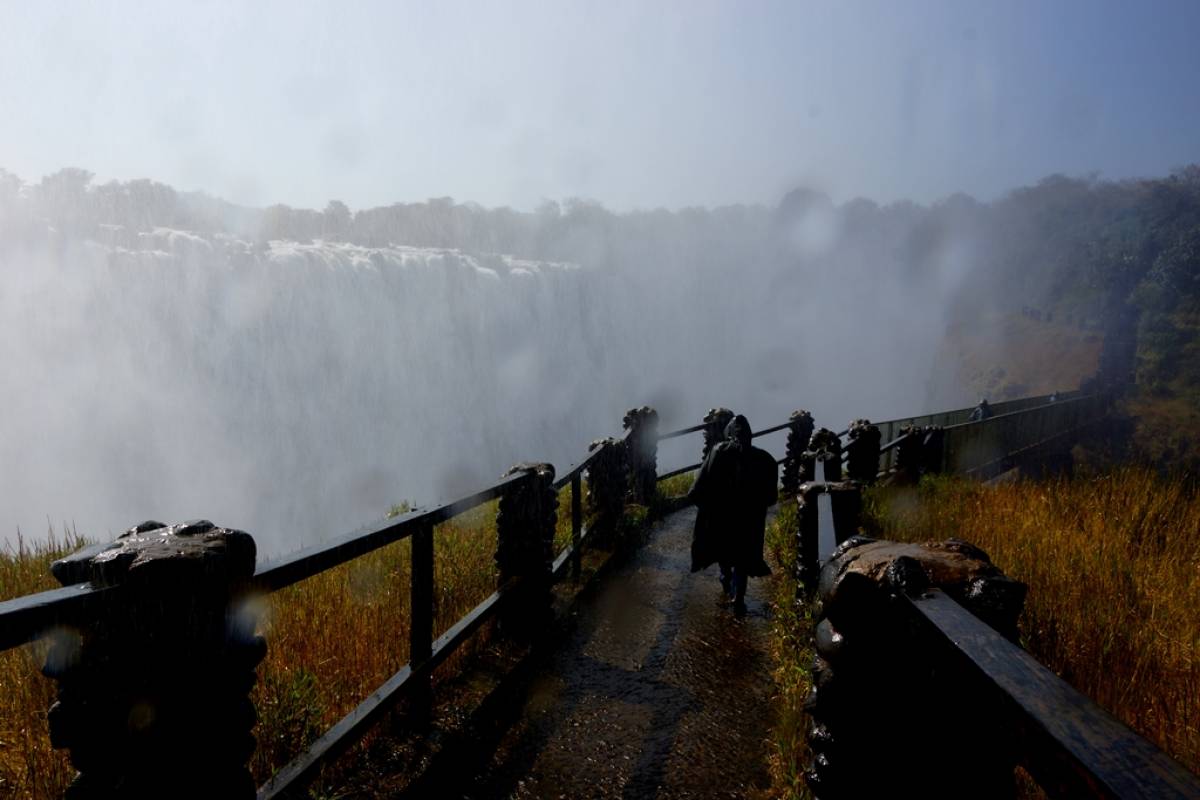 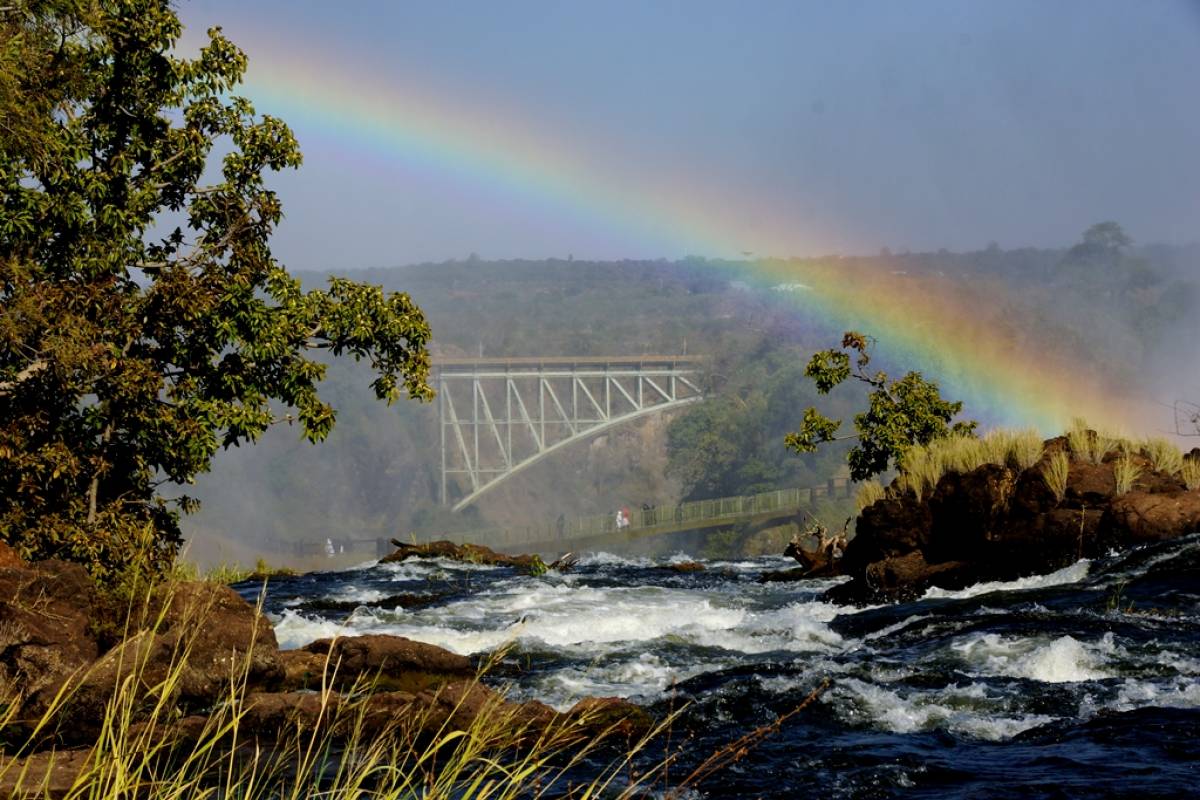 "During the rainy season," said John, our guide from Bushtracks, "the spray from the Falls rises 500m in the air and can be seen from 70k away."

We were getting the up close and personal view of Victoria Falls. Victoria Falls! From the time I was a child I'd heard of this very special place on the planet. This iconic place, that was discovered by David Livingstone on November 16, 1855,  was adventure, romance, history, contributed to my desire to travel. Did I say adventure? Though most histories say Livingstone was the first European to see the Falls, John said other Europeans saw it first, but didn't think much of them. Of course, the local people knew about the falls from the beginning of time, and call it Mosi-oa-Tunya - The Smoke that Thunders. The local beer is called Mosi - but it doesn't really thunder, it just kind of sneaks up on you.

Joyce Sikabbubba met me at the lobby of the Royal Livingstone to make sure I got to the adjacent Sun International's 3-star property Zambezi Sun to meet up with John. There were three other African people in our group who were there for a conference on Tax. Joyce didn't join us for the short walk to the Falls. As we were staying at Sun Lux properties we didn't have to pay the entrance fee - just show our room keys and sign in.

And we were there. Before crossing the Knife-edge Bridge John took us along the path to the right to a view point. My Special  5 and Small 5 friend from the day before passed me going the other way. "The rainbows are incredible today."

And they were. Rainbows all of the time and Double rainbows at times, but a little difficult to catch in digital. Out there are great photos of the Falls taken from helicopters that fly constantly over the Falls.  I wasn't able to do that.

From the Knife-edge Bridge, where you get great views of the Eastern Cataract (Devil's Cataract) on the Zimbabwe side but there is water, mist, rain coming down, and getting pictures is a little difficult - unless you don't value your camera. Views of the main falls is in Zambia, as well as the Boiling Pot. The Boiling Pot is where the river turns and heads down the Batoka Gorge. It swirls around, churning like a blender, but whiter than your favorite smoothie.

At the view point we took pictures of each other - one of the most Likes I've ever received on Facebook - before we crossed the Knife-edge Bridge.

I loved every moment. Some people looked as if they were not enjoying being soaked to the skin. There were people selling the plastic one time use raincoats, but I had my UD jacket that I could put my camera under and unzip when the blowdown let up a bit. From there down I got soaked. At times riv ulets of water were a serious stream coming down the steps. I couldn't stop smiling. Friends keep asking me if I enjoyed the trip - well, yeah - it was a hell of lot better than sitting in the office.

I didn't get into the discussion, but from comments I overheard, there is a belief that the mist, coming down, is something special. There is a purity to it that I haven't felt for a long long time. My hair was drenched when I returned to my room and when I dried out I was going to give it my SuperStylingTM  20 minutes in front of the mirror I thought I should just leave it alone. It looked great. I tried to replicate this the next day out of the shower and it just looked phummph.

Mavis Lutangu - Beauty Therapist. I thought I provided a challenge. She didn't need to make me look any better, but just take away the tension, the stress and strif

e of months of life - a real challenge.

The relaxation began far before Mavis could lay a hand on me. We walked down to the Zambezi River where there are cabanas with massage tables. I had seen them the day before when I arrived and thought nothing could be cooler. There is something about the Zambezi that makes you forget urban. Makes you forget streets and traffic. And it is not just the monitor lizard that walks along the bank as you are settling in - we have them in Singapore - it is just an exceptional place.  Face down on the table there is a mirror that allows you to see the River and the wildlife. Relaxing and stimulating at the same time it was 90 minutes of water-inspired bliss. Inspired by the purity of the mist from the falls. A friend of mine just sent an email and asked if I'd seen the moonlight rainbow. Wow! What a sight that must be. I'd never heard of such a thing.

Throughout the massage I listened to the rustling of the river, but Joyce was to make me laugh with another thought.

After the massage I was offered a juice drink of either Healing, Detox and Uplifting. I opted for healing though all three were needed.

From the moment I had arrived I wanted to sit on the deck and have a drink and gaze at the mist rising from Mosi-oa-Tunya, and thoughtfully, a long break was written into my itinerary. From Mavis' message I meandered down to the Sun Deck where I had lunch. At the Deck they served salads, a Greek Platter, beef burgers, fish and of course Mosi. I Mosied and gazed at the mist.

When you sit on the deck, or on your room balcony, you feel like you don't need to do anything else in life.

I used my downtime to go shopping at the craft market just outside the entrance to the falls. There are some incredible crafts there and I had to look at everything before I decided what to buy. Limited luggage allowance will do that. There were so many things I wanted, and the large wooden bowl was a work of art that I passed on. When I returned to my room - an easy and enticing walk from the Falls - I went to the balcony to deal with my drenched clothes. They weren't there. They were dried and neatly folded. My shoes dried. Now that is service.

I met Joyce in the lobby for transfer to the Royal Livingstone Express that  has five air-conditioned carriages, two dining cars, a club/kitchen car, lounge car, and an observation car.  The engine is either a 10th class No. 156 or a 12th class No. 204 locomotive. One of the dining cars, The Wembley, was built by the Birmingham Railway Carriage and Wagon Company, and went on display in London at the British Empire Exhibition in 1924. It was shipped to the Union of South Africa and entered service on 19th May 1926. The entire train has been immaculately restored.

It has been in the David Livingstone Museum until Bushtracks made a deal with National Heritage of Zambia to restore it. Sun International does the catering in their usual elegant style for the twice a week excursions - on Wednesday and Saturdays.

We were welcomed with beer, wine, sodas and fruit drinks.

Shadrick (below) the Train Manager in charge of F&B welcomed his guests and talked about the history of the train and what we would do on this trip. t we did was slowly travel through the bushland, where elephants and other animals are often spotted, to the World Heritage Site where we had views of Victoria Falls from the bridge that links Zambia and Zimbabe.

Dan and Shirley were also on the train as was an extended family from the USA of grandparents, their children and spouses and their children.

We were greeted by a small group of souvenir sellers on the bridge and magnificent views of the falls and the bridge high above the Boiling Pot.

Joyce and I talked non-stop over dinner. She had me in stitches with her hippo impersonation: "Welcome to Zambia, Floyd." she rumbled in a voice that came from the depths of the Zambezi.

Before we went our separate ways Joyce reminded me that the following day I would get a chance to take a cheetah for a walk - and like the trip on the Roayl Livingstone Express, it would be an experience that I would never forget.