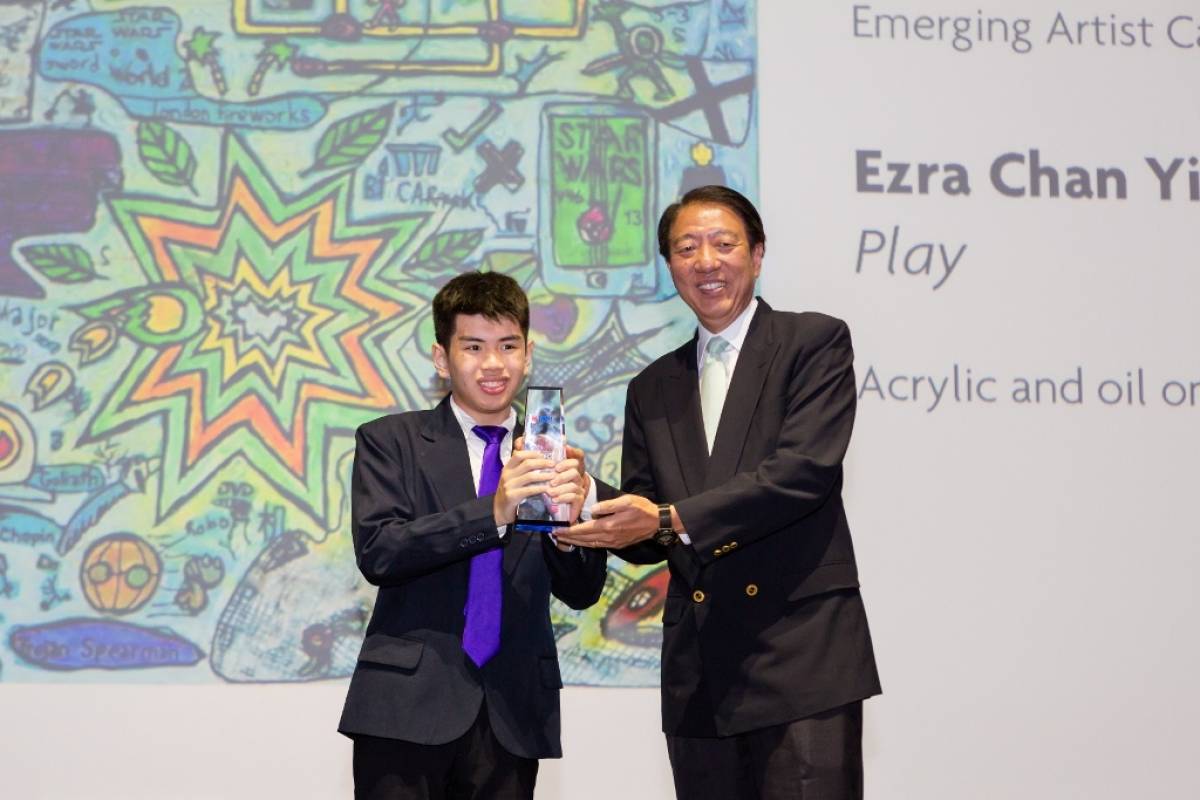 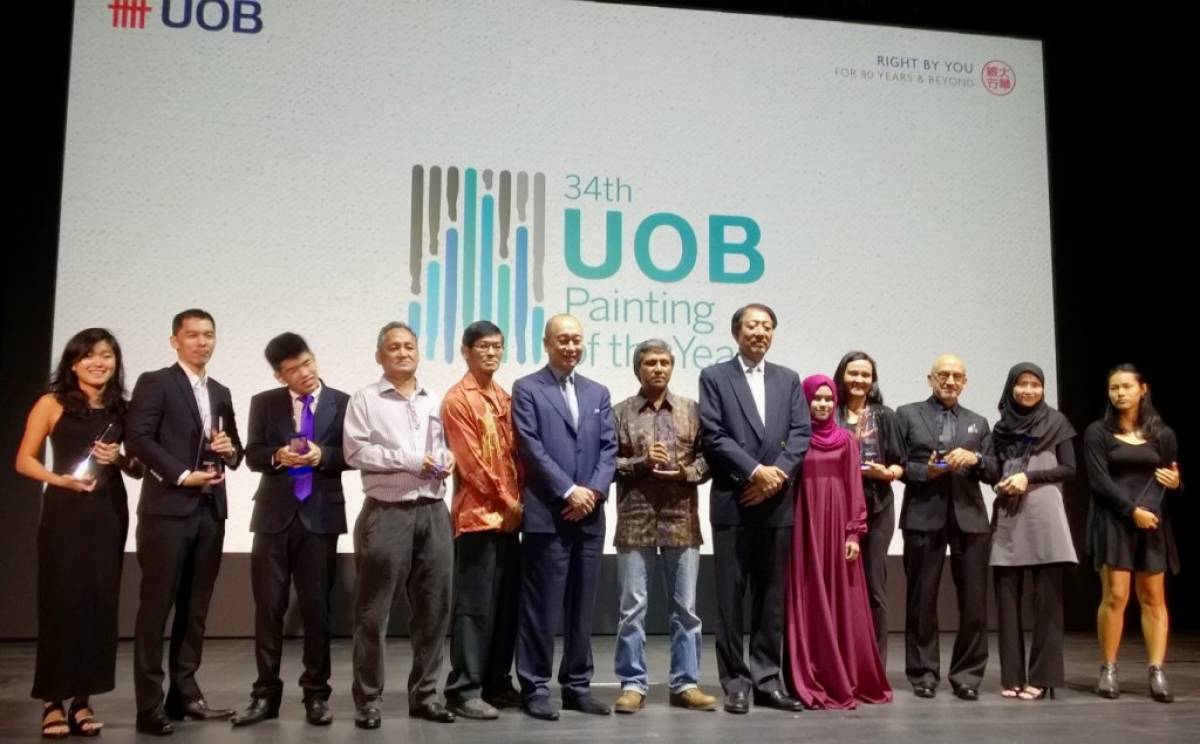 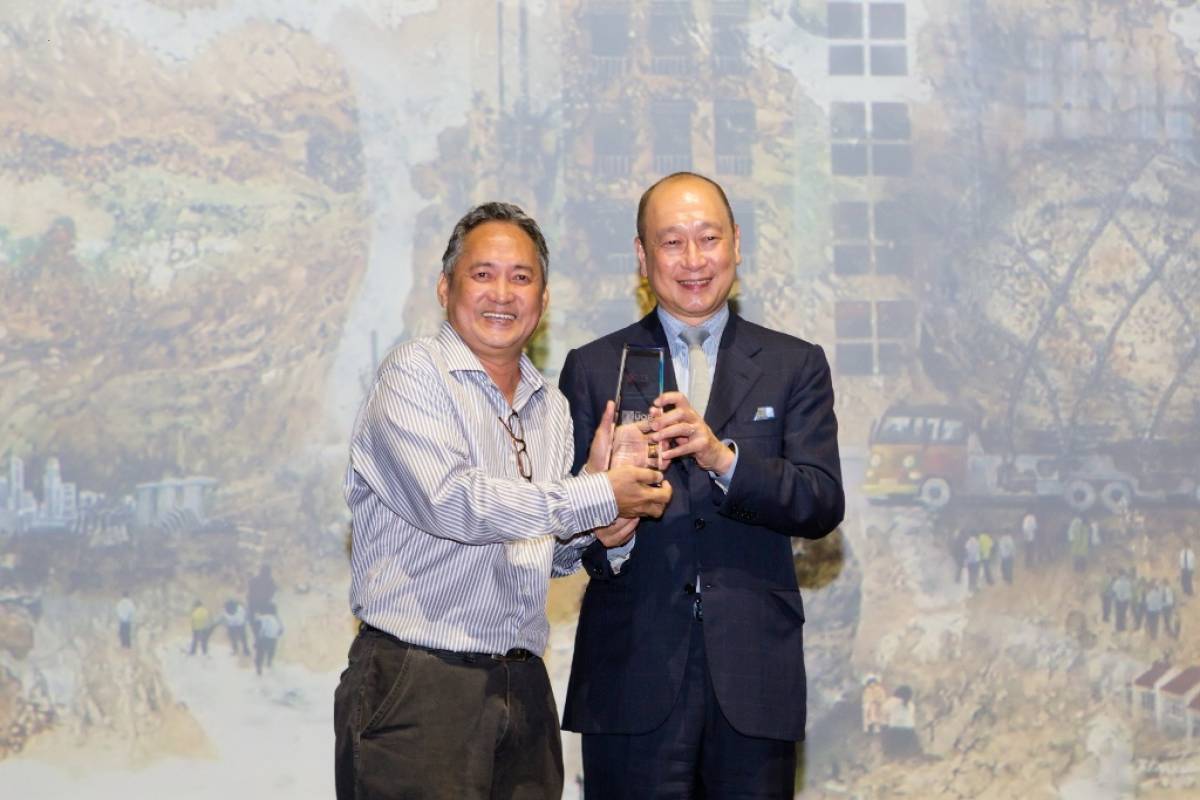 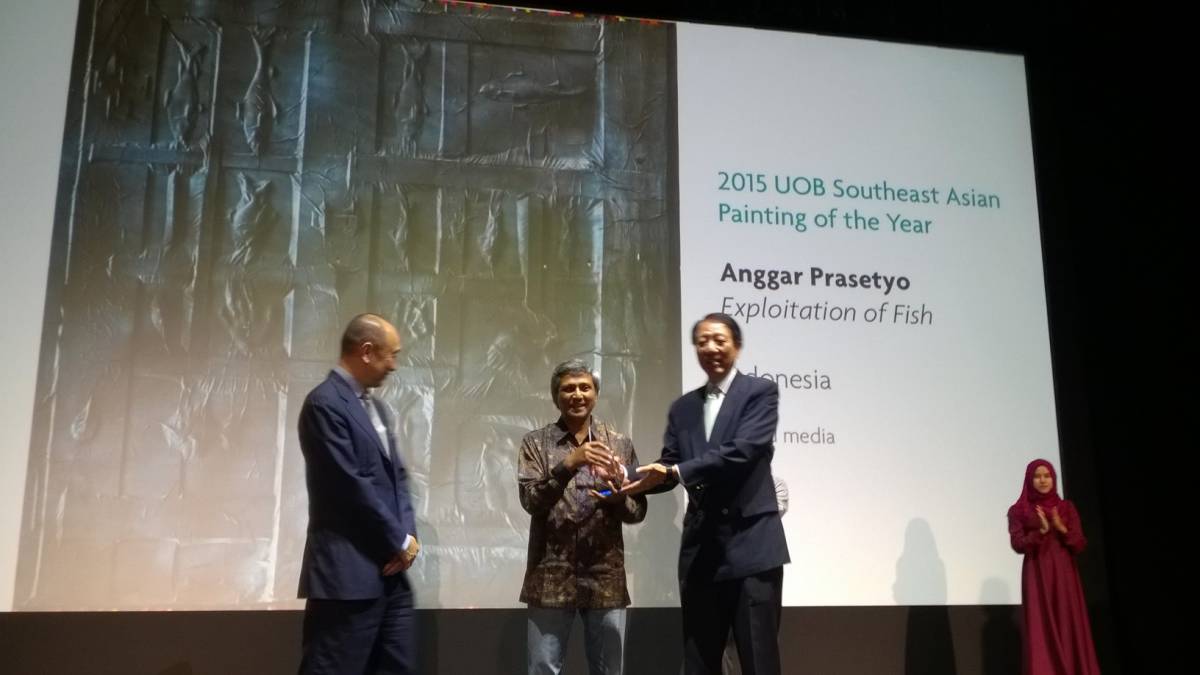 Singapore, 4 November 2015 – In a tight, well-run ceremony United Overseas Bank (UOB) presented the 2015 UOB Southeast Asian Painting of the Year award to Indonesian artist, Mr Anggar Prasetyo, (above centre) for his painting Exploitation of Fish. It depicts the disregard for environmental consequences of over fishing, which has vastly depleted the ocean’s reserves. The combination of different techniques such as moulding, spraying and acrylic painting results in an embossed design and a relief effect on the painting’s flat canvas.

The painting impressed the judges with its innovative technique and strong narrative on the erosion of natural resources conveyed through the use of symbols. The 42-year old’s winning painting was among four winning entries from the 2015 UOB Painting of the Year country competitions held in Indonesia, Malaysia, Singapore and Thailand. This is the second consecutive year that an Indonesian artist has won the top regional award.

UOB’s commitment to art began in Singapore more than 40 years ago, which later extended to across Southeast Asia as the Bank built its network in the region. Its flagship UOB Painting of the Year programme underscores this commitment. Now in its 34th year, the competition gives talented artists across Southeast Asia an avenue to showcase their artistic talent to a wider audience. It has also launched the careers of well-known artists such as Singapore Cultural Medallion winner Goh Beng Kwan, Anthony Poon and Chua Ek Kay. “Southeast Asia is our home and where we first established our business. As UOB celebrates its 80th anniversary this year, we remain committed to supporting the region’s economic, social and cultural development. Our support of art is one way we are giving back to the community as we believe that artists, through their art, can inspire hearts and minds, fostering a culture of creativity and innovation in our society.”

Mr Anggar Prasetyo, UOB Southeast Asian Painting of the Year winner said the inspiration behind his painting was mankind’s duty to preserve the ecosystem and prevent exploitation of the ocean’s resources.

“The ocean provides vast resources of biological diversity for mankind and it is everyone’s responsibility to preserve it. We must not allow exploitation of the ocean and its ecosystem as our future generations deserve to enjoy a clean ocean and we should not leave them with a mere memory of it.” Mr Benjamin F. Cruz was presented the Singapore 2015 UOB Painting of the Year award for Building…. his acrylic artwork on canvas. The painting depicts the construction of a building as it takes on shape and form, finally overshadowing its environment to become the subject. Mr Cruz is a retiree who divides his time between the Philippines and Singapore, and his winning piece Building…. is symbolic of Mr Cruz’s impression of Singapore and its transformation into a bustling metropolis. Among his list of artistic achievements are five commendations from previous UOB Painting of the Year competitions, which may have been why he was so enthusiastically pleased at having won this year.

Mr Cruz’s technique of using colour and textures on complex surfaces caught the judges’ eye. The painting sized at 152 centimetres by 160 centremetres also pulls the viewer in to dwell on the different parts of the painting, drawing their eye back and forth between the lighter and darker hues. This sparks a tension between the concrete jungle and the fragile humanity that dwells within it.

Emerging Artist Category: Most Promising Artist of the Year (Singapore) invites viewers into his world of play, drawing and paintingIn the Emerging Artist category, 15-year old Mr Ezra Chan Yi, won the Singapore 2015 UOB Most Promising Artist of the Year award. Play, Mr Chan’s acrylic and oil on canvas piece represents a world in which Mr Chan gets to play with all his favourite games while drawing and painting. Through the painting, he recalls the places he frequents, the logos and brands he sees and the sounds he hears.Mr Chan started painting at the age of four as a way to express his emotions and thoughts. Six years later, he enrolled in Very Special Arts (VSA), a charity that helps people with disabilities to access the arts for rehabilitation and social integration. Within a year, he contributed two artworks to raise funds for the organisation. He has participated in group exhibitions organised by VSA and Pathlight School and has had his designs adopted for merchandise. All winning paintings will be exhibited at the lobby of UOB Plaza 1 at 80 Raffles Place from 9 November 2015.

The Scents of a Woman

The First Ever Queens of Asia Comedy Special: Live in ...