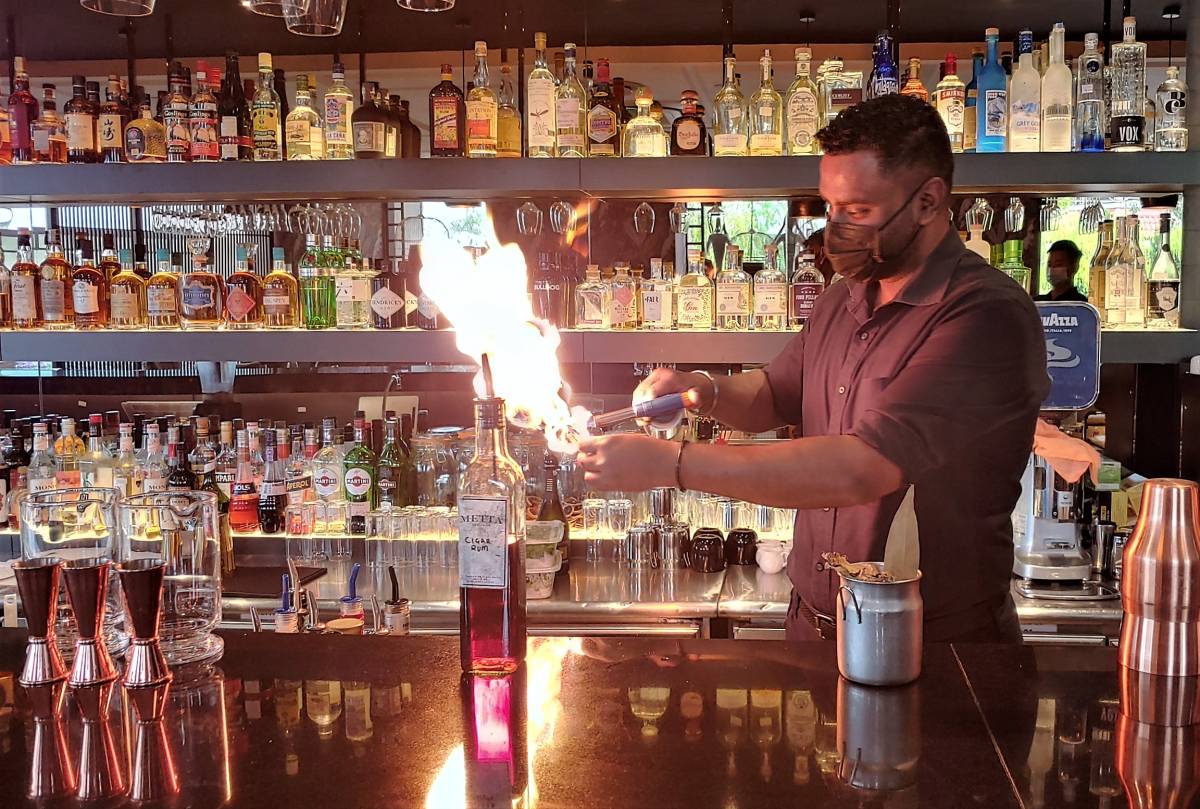 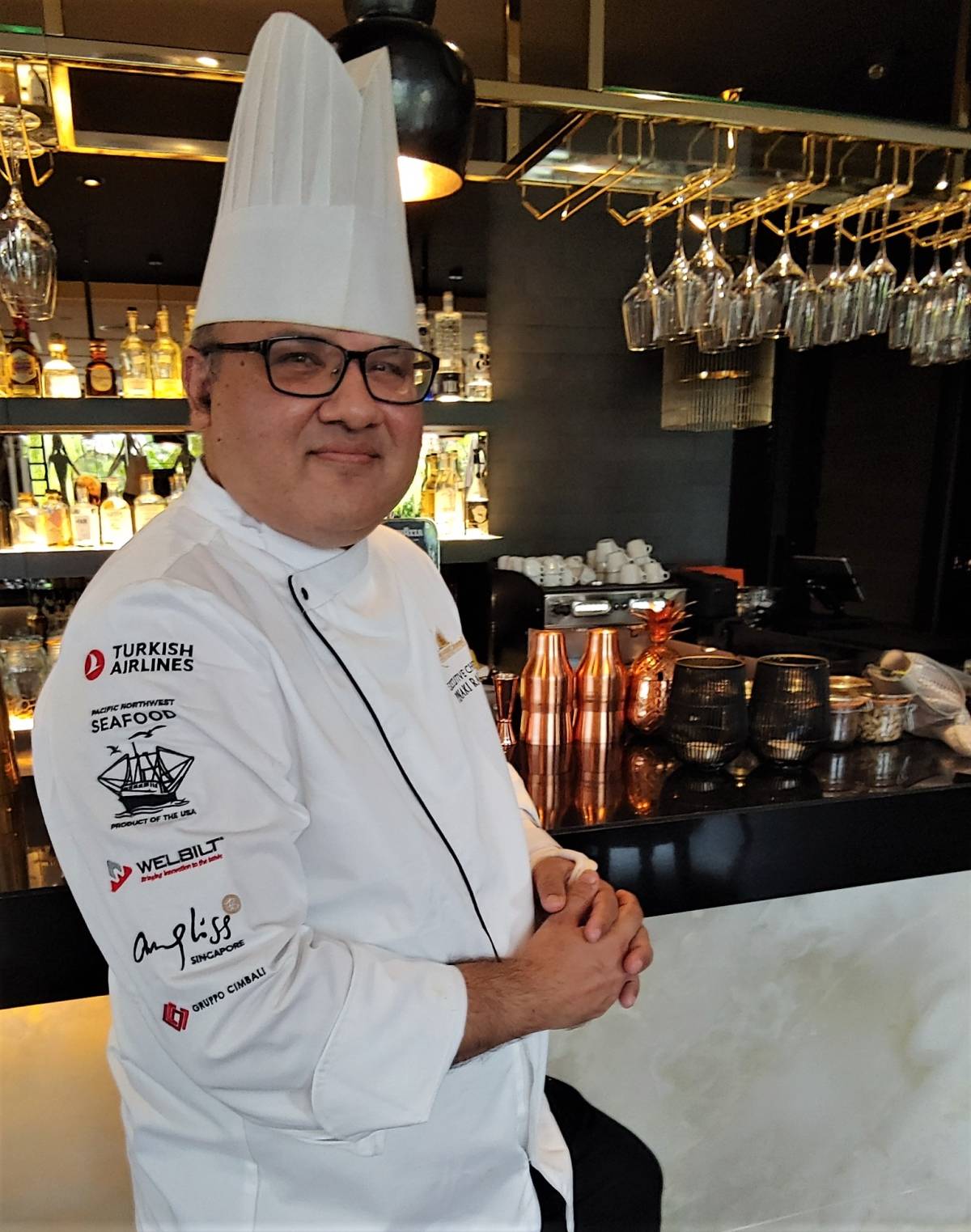 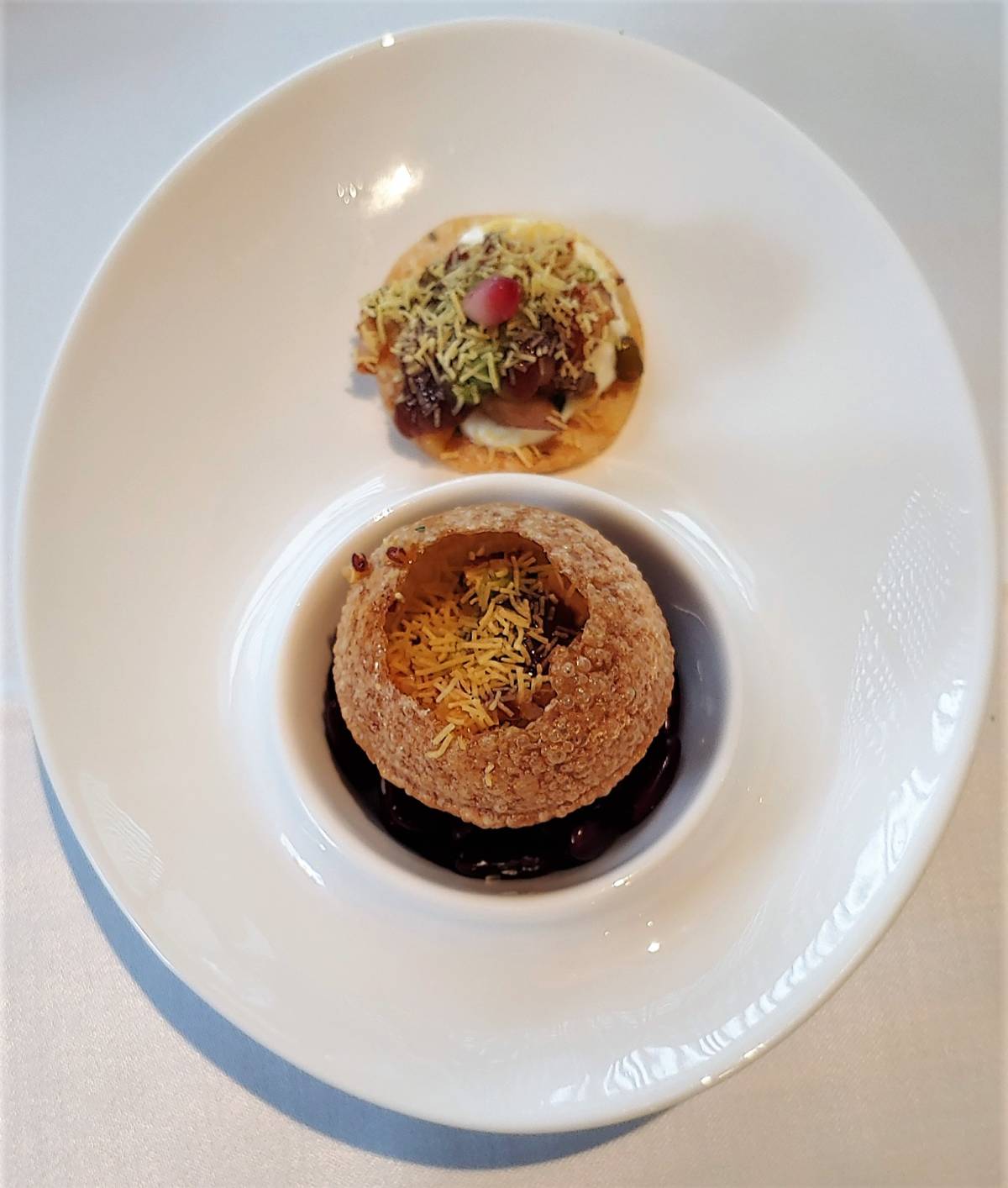 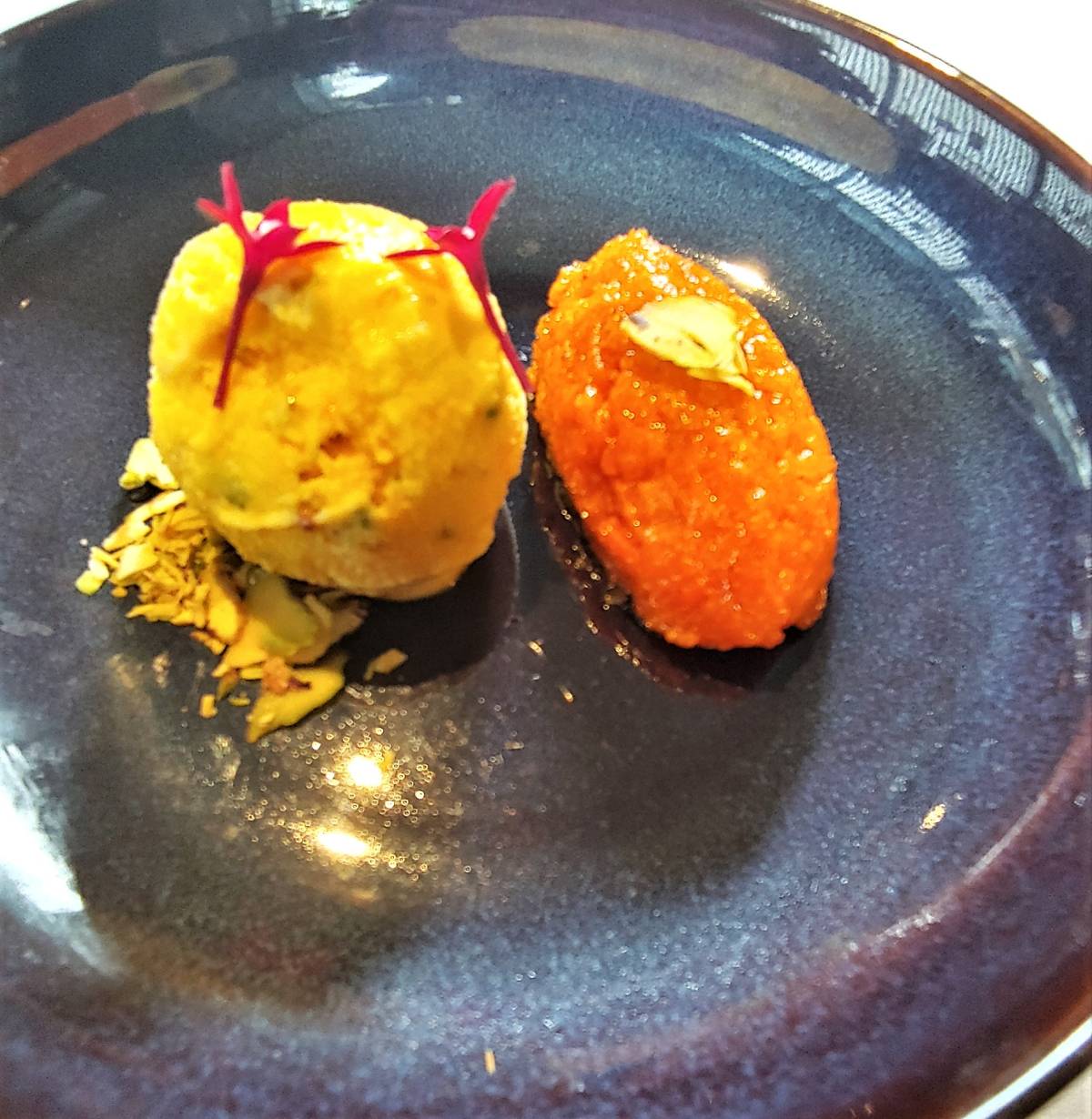 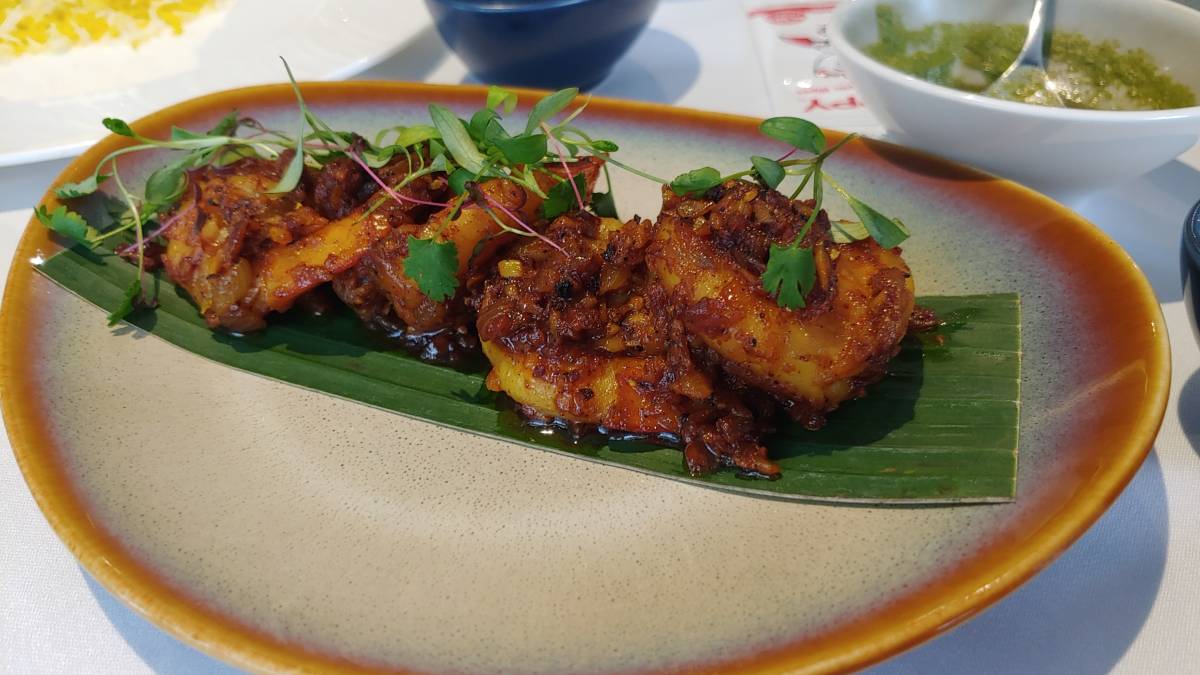 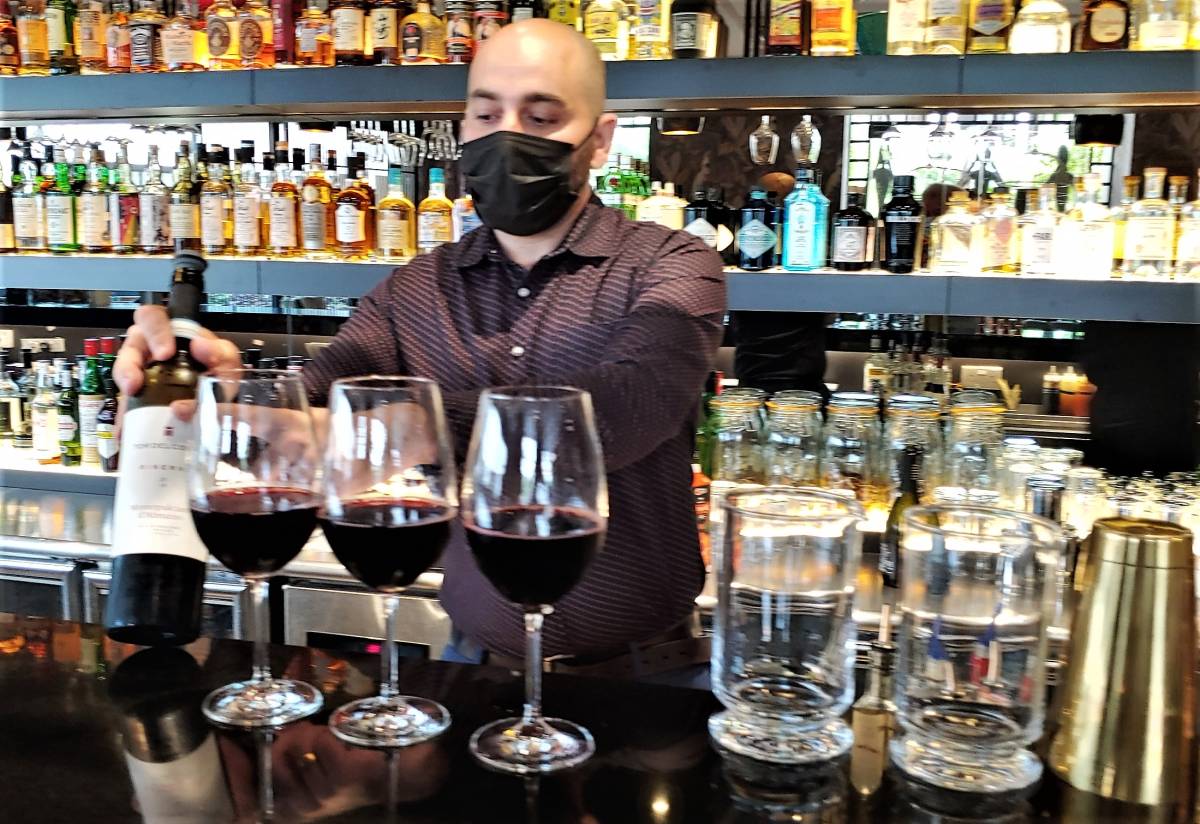 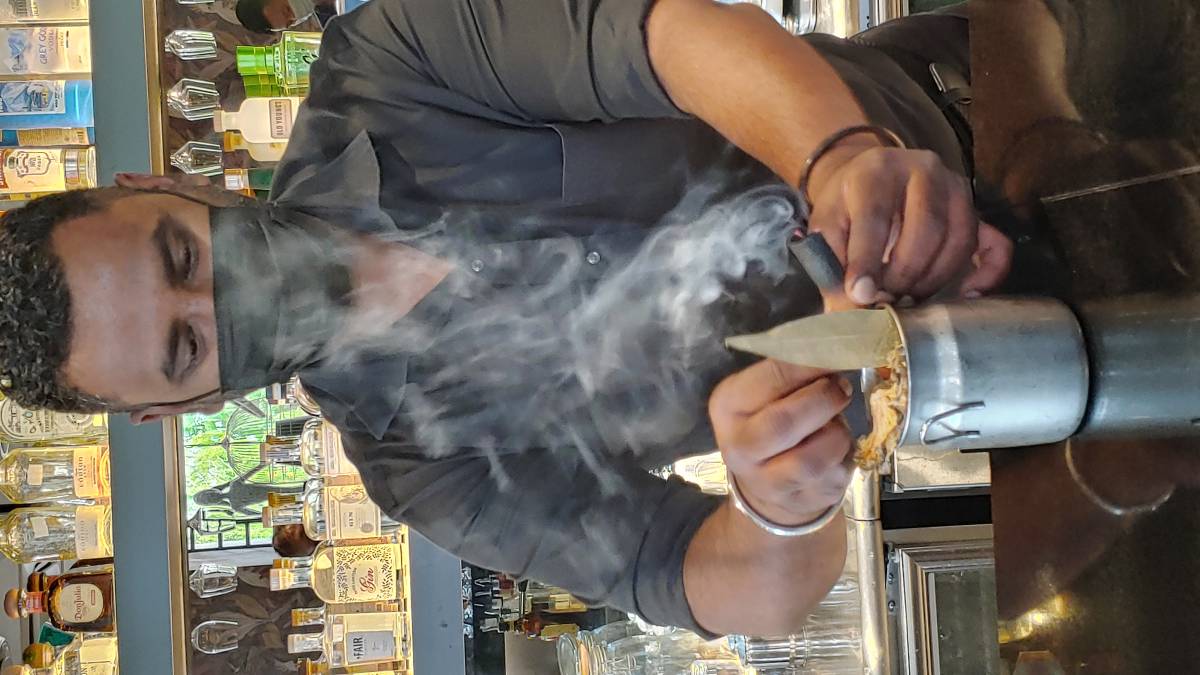 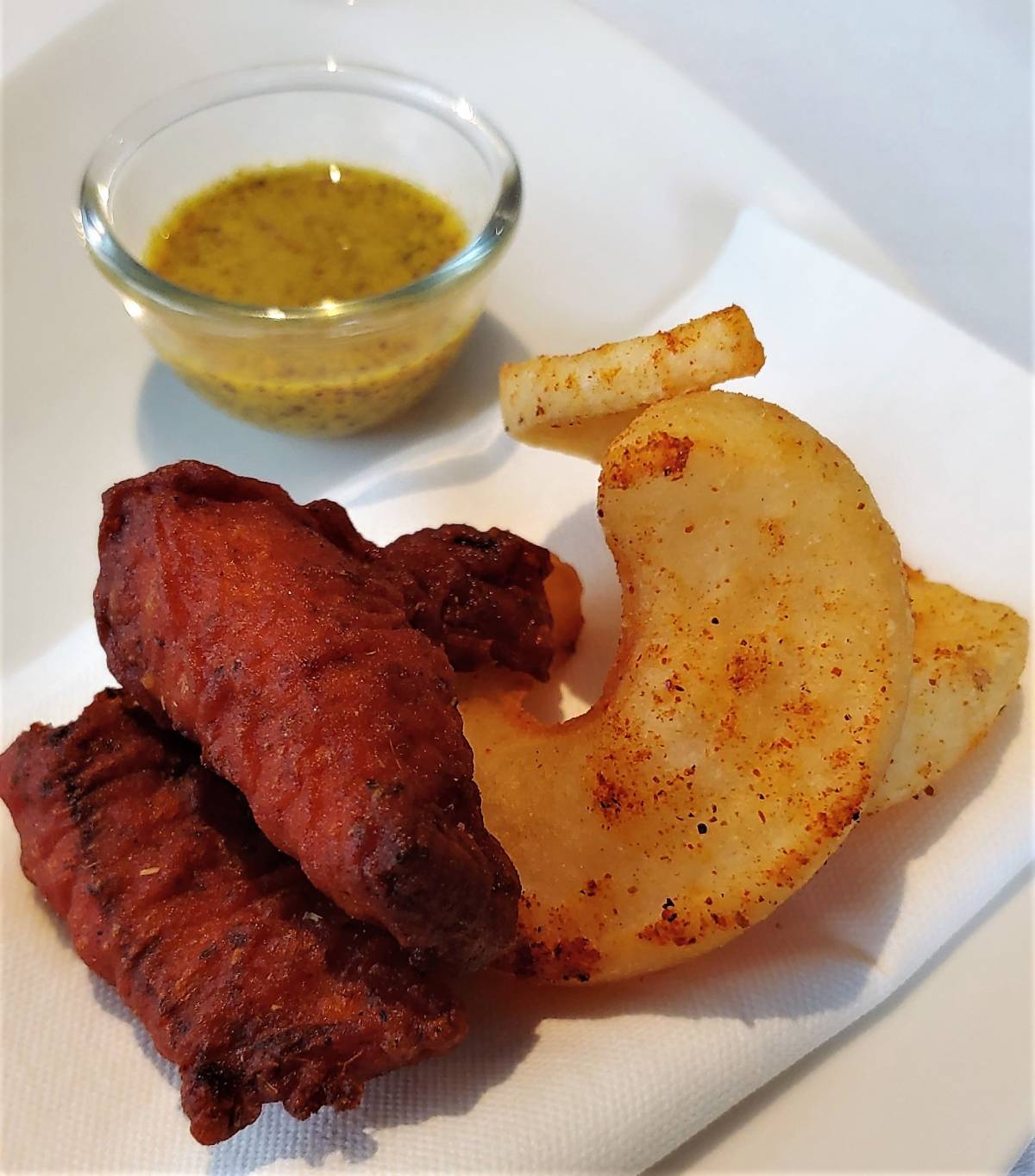 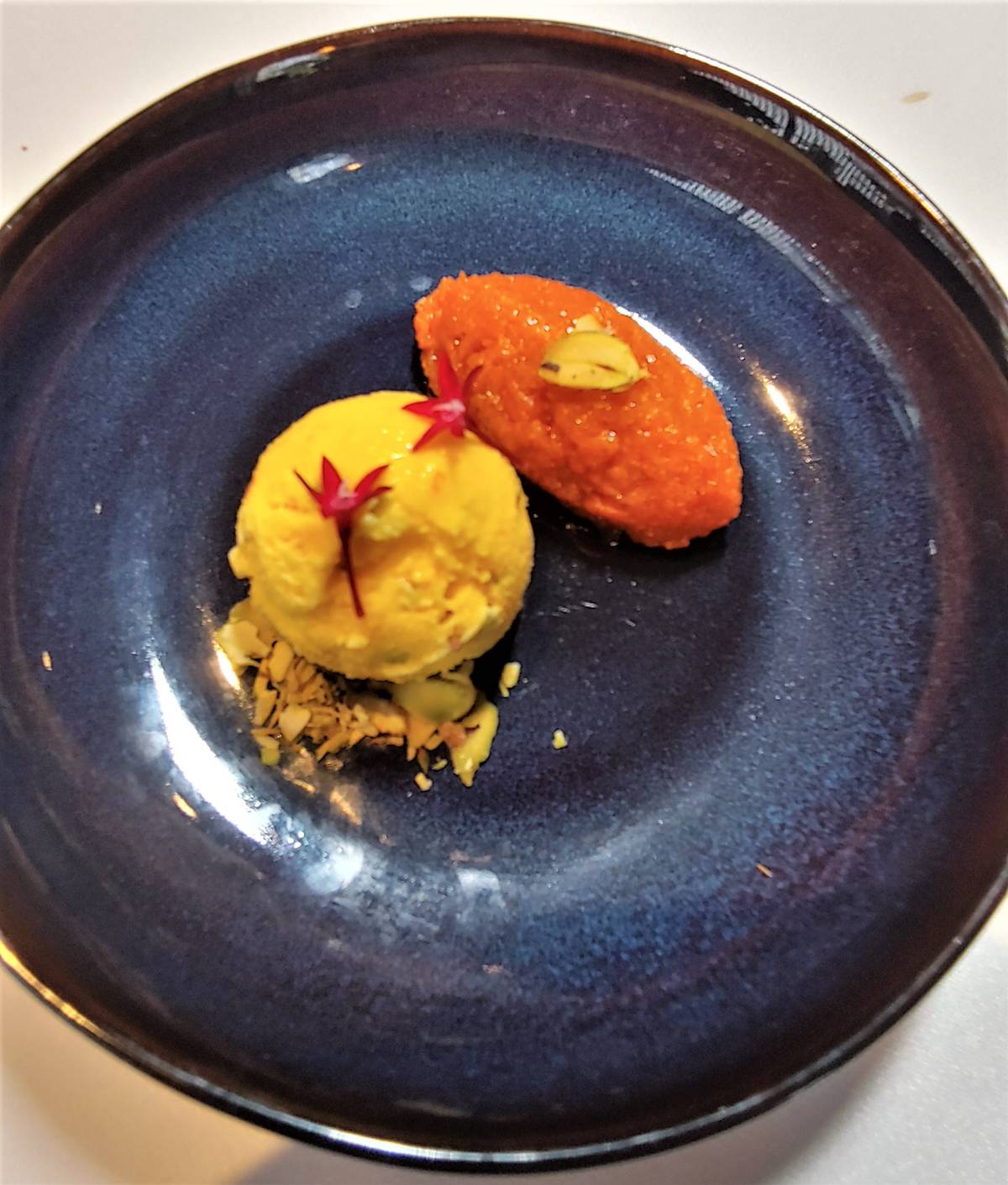 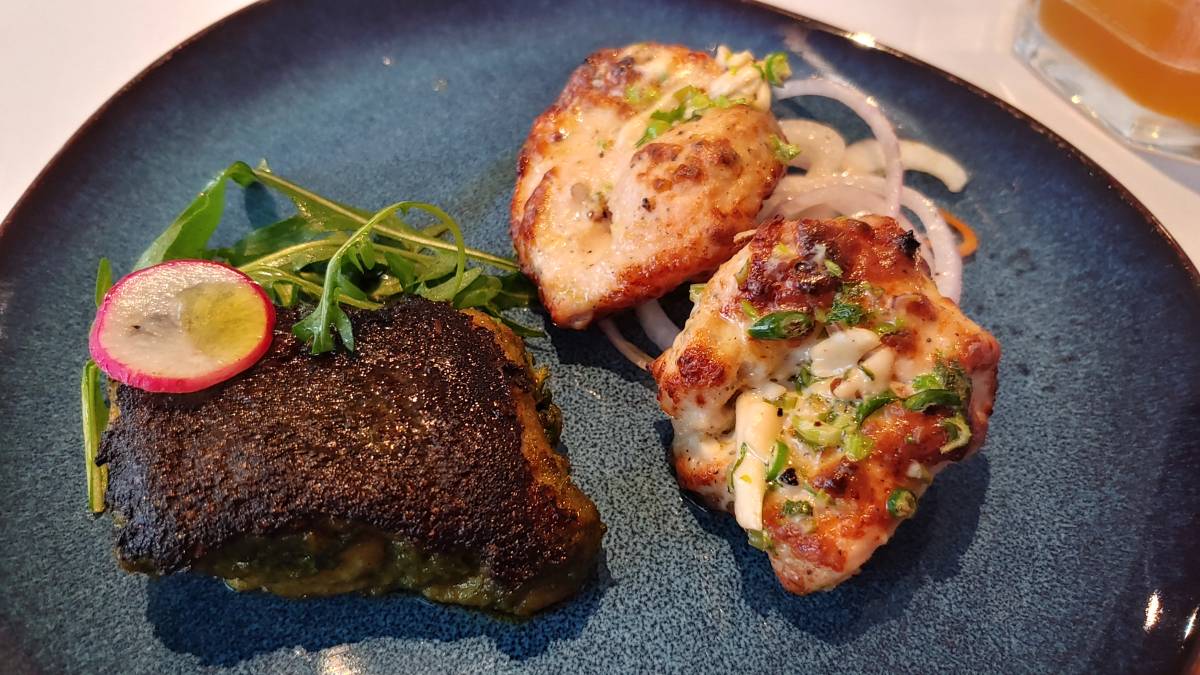 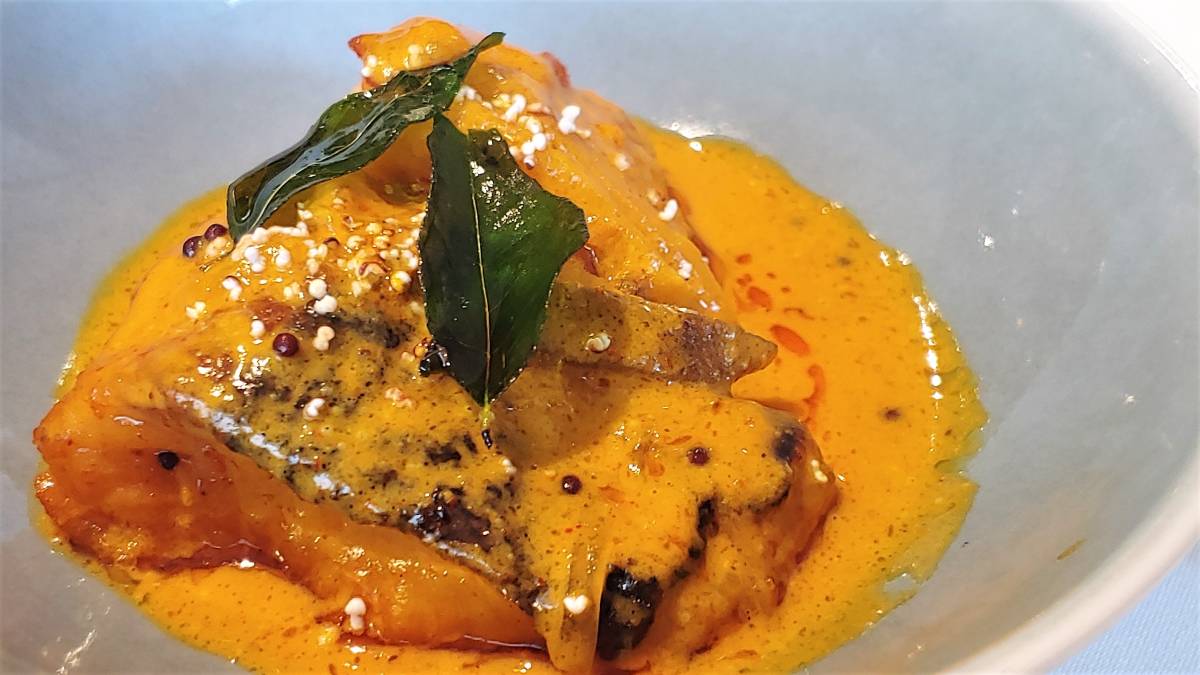 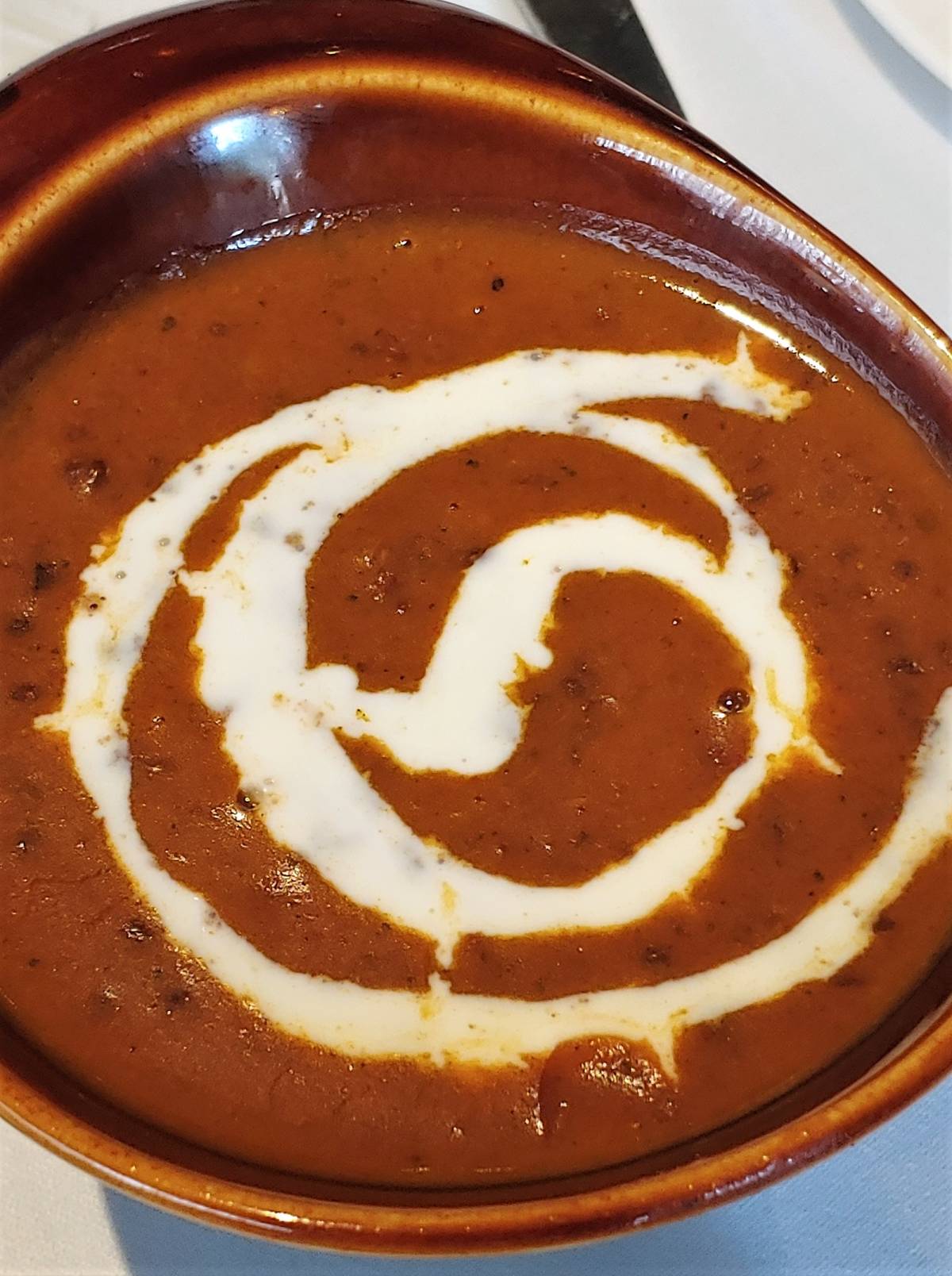 “We do traditional Indian Food,” stated Yantra Executive Chef, Phinaki Ray (left) as we sat down for a

food tasting as part of the World Gourmet Summit’s Partnership with Pacific Northwest Seafood. “We don’t do fusion food,” he explained, “but we are pleased to be a part of this WGS event.”

The World Gourmet Summit and Pacific Northwest Seafood promotion menu was launched in September 2021 and it is ongoing for various restaurants until November 2021. For Yantra, the promotion is from 25 September to 6 October 2021.

Yantra, which has won numerous awards over many years,  says on its website, "it pays tribute to fine Indian cuisine with a balanced mix of classic and contemporary dishes. In loving, reverent and highly skilled hands, cherished dishes are recreated with a passion. You will find many dishes are presented in incarnations that simultaneously stir loving memories while exciting your palate."

“Our food is North Indian, from along the Grand Trunk Road,” Chef Ray responded to my question. The Grand Trunk Road, one of Asia's oldest and longest roads, links Central Asia to the Indian subcontinent. It runs from Afghanistan, passes through Chittagong and Dhaka in Bangladesh, Kolkata, Allahabad, Delhi, and Amritsar in India, and Lahore.

“I am from Calcutta, so my influences come from there,” Chef Ray stated and as we were to find out as we enjoyed the starters and mains.

Yantra, describes itself as “a place where every dish is a history book on a plate. Some are complete chapters – perfect renditions of traditional Indian cuisine. Others are living chronicles of our times – inspired by tradition and contemporary influences.”

It’s tag line states: “ Yantra – Defining Indian Cuisine.” I think it would be more accurate to say, “redefining” Indian cuisine as most of us already have an image of what Indian cuisine is. Chef Ray and his team turn that image on its head.

Beginning with what Chef Ray called ‘street food’ we were amazed and delighted with the Amuse Boche (above right) which is smoked rockfish and quinoa chaat balloon. The single bites exploded in the mouth with an amazing combination of spices, flavours and textures I hadn’t experienced before. I have to be careful with my use of superlatives here as the eight dishes will stretch my vocabulary to the limit.

we say India food is spicy” the Executive Chef pointed out, “that doesn’t mean that it is hot. It rightfully means that all the flavours from the spices can be enjoyed in the food.”

Staying on the ‘Streets of India’ Taley Huey Machhi (left) was served. This very popular dish in Calcutta is check pea based and served with Indian homemade mustard. “If you ask for kasundi in Calcutta they will be so amazed and they will respect you for your knowledge of Indian food,” Chef Ray stated.

We dipped Amritsari US rockfish and chatpata aloo into the kasundi but you could use your favorite chips or crackers and it would probably be just as stunning. If this is ‘street food’ I can only say that is one hell of a street.

And while we were being indulged with such gorgeous food Gusztav Toth, Group Beverage Operations Manager, (below and top photo) operating behind the very long bar of Metta, Yantra’s bar & lounge, recommended red wines – based on our taste. I enjoyed the Italian Tor del Colle Riserva 2018, Montepulciano d' Abruzzo. When we got to the mains Gusztav presented two whites, one from France, one from Italy, that would pair perfectly with the fish and seafood dishes. Both whites, Giuseppe e Luigi Sauvignon and Louis Latour Bourgogne Chardonnay, had a very light, deft touch.

The bar boasts of an imaginative range of specialty cocktails such as the Tandoor Mojito and the dynamic Puffin Indoor that consists of Cigar smoked rum, Kopi O Liqueur, Pineapple Juice, Lime Juice, Capsicum & Bay leaves syrup. The top picture is of Gusztav firing it up. To check out the cocktails at Metta go to: www.facebook.com/mettabarattanglin.

Chef Ray next presented Tandoor Magic. He explained that the tandoor had three types of heat that cooks the meat very quickly. The heat caramelizes the exterior and the fast cooking keeps all the juices in. The Chicken Mali (cream cheese) Tikka and Cod Cafreal Tikka were the perfect embodiments. The traditional tandoori chicken and sustainable codfish in Goanese marinade were of course tandoori cooked to perfection. Take your choice of superlatives: mouth-watering, succulent, spectacular or amazeballs (which I just found on Google).

And the Mains did not let the side down as they delivered on the promise of bringing out the flavour of the spices. The Cod Fish Aleppey was so tender it slipped off the fork. The Aleppey sauce with fresh green mango and chili plays a tango the palate. The succulent prawns were sautéed in butter and a side dish of dahl added depth to the dance. I liked to mix it with the saffron rice and scoop it up with the naan. Chef Ray told me that he only uses saffron from Iran, which is obviously the best the world has to offer – creating the most fragrant rice.

Saffron wasn’t limited to enhancing the rice but was also present in the pistachio and saffron ice cream. And another step off the normal path was Gajjar halwa, carrot campote, a fitting end to this symphony.

What impressed about Yantra and Metta? Well, many things. The food was light years from the heavy spiced foods often associated with Indian cuisine. The service was efficient and professional and Gusztav Toth’s creations at the bar were magical. For a very fine fine dining experience Yantra’s is highly recommended.