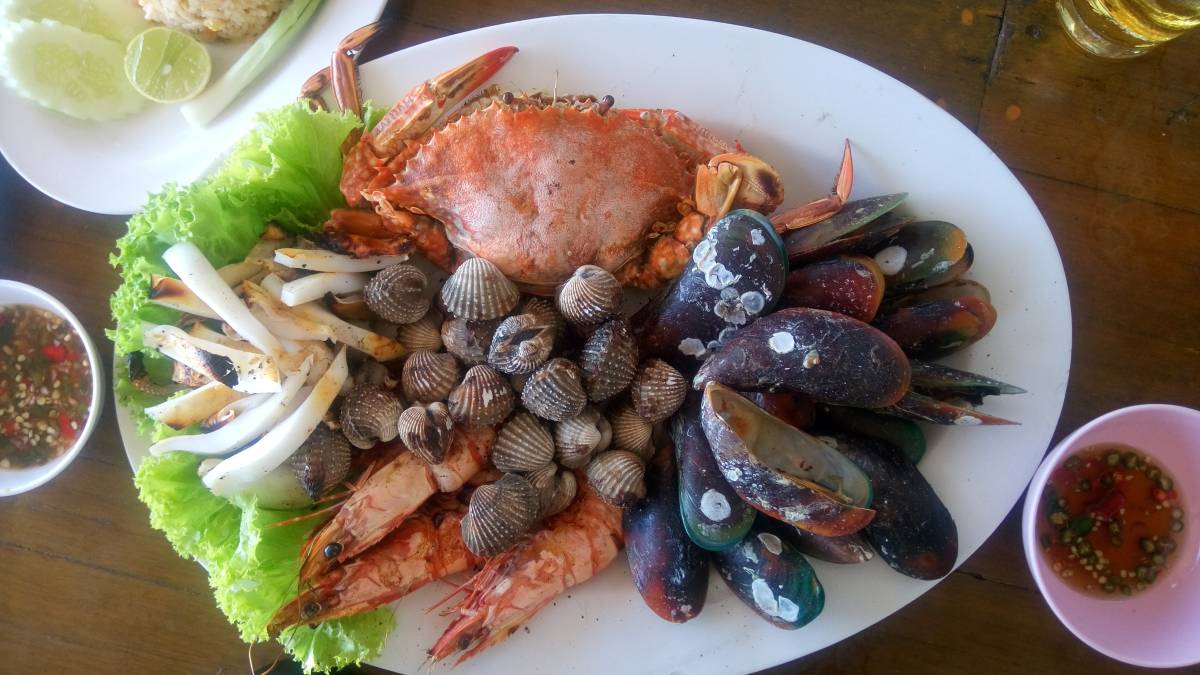 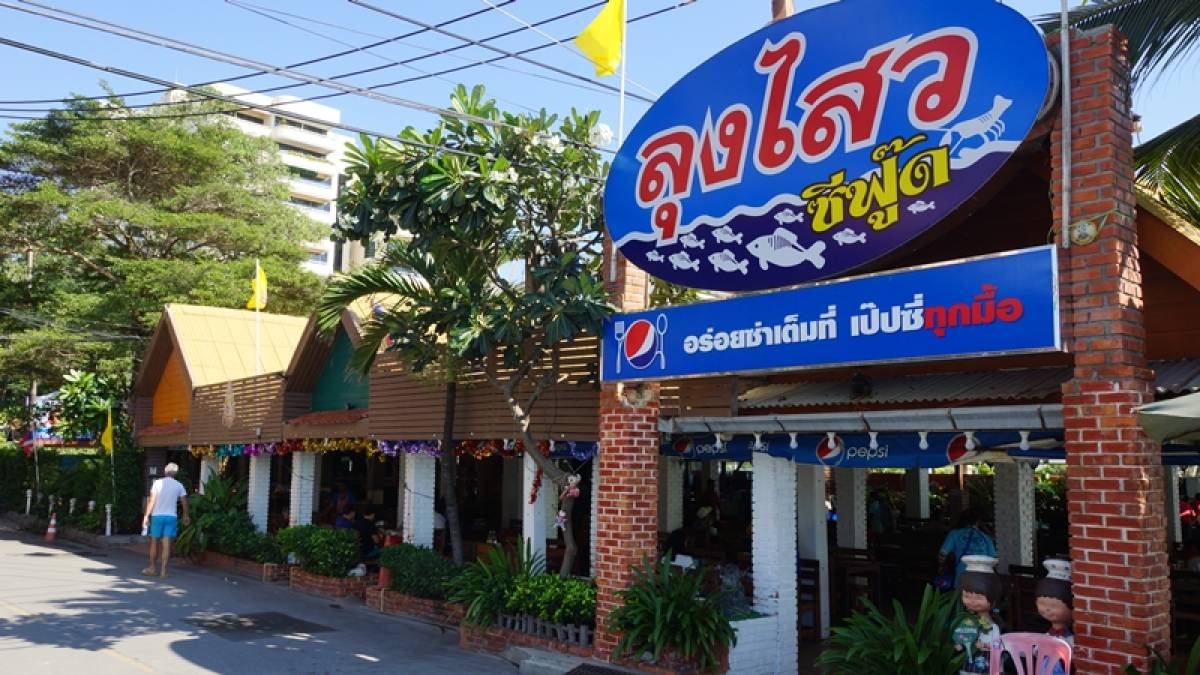 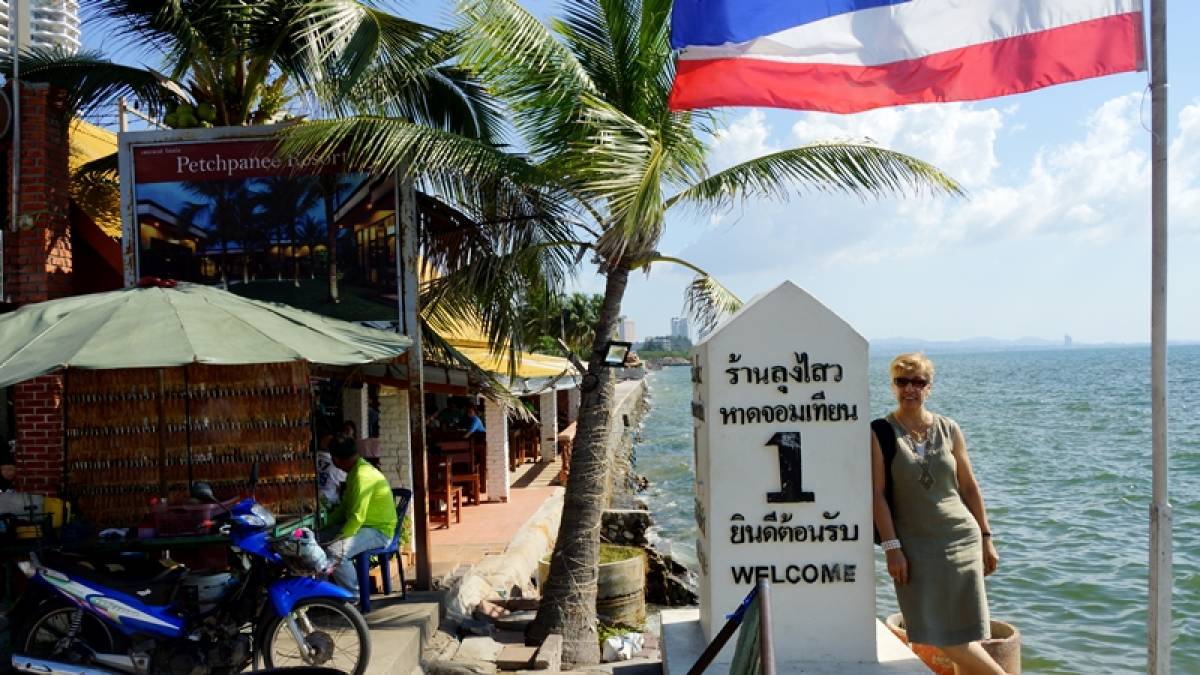 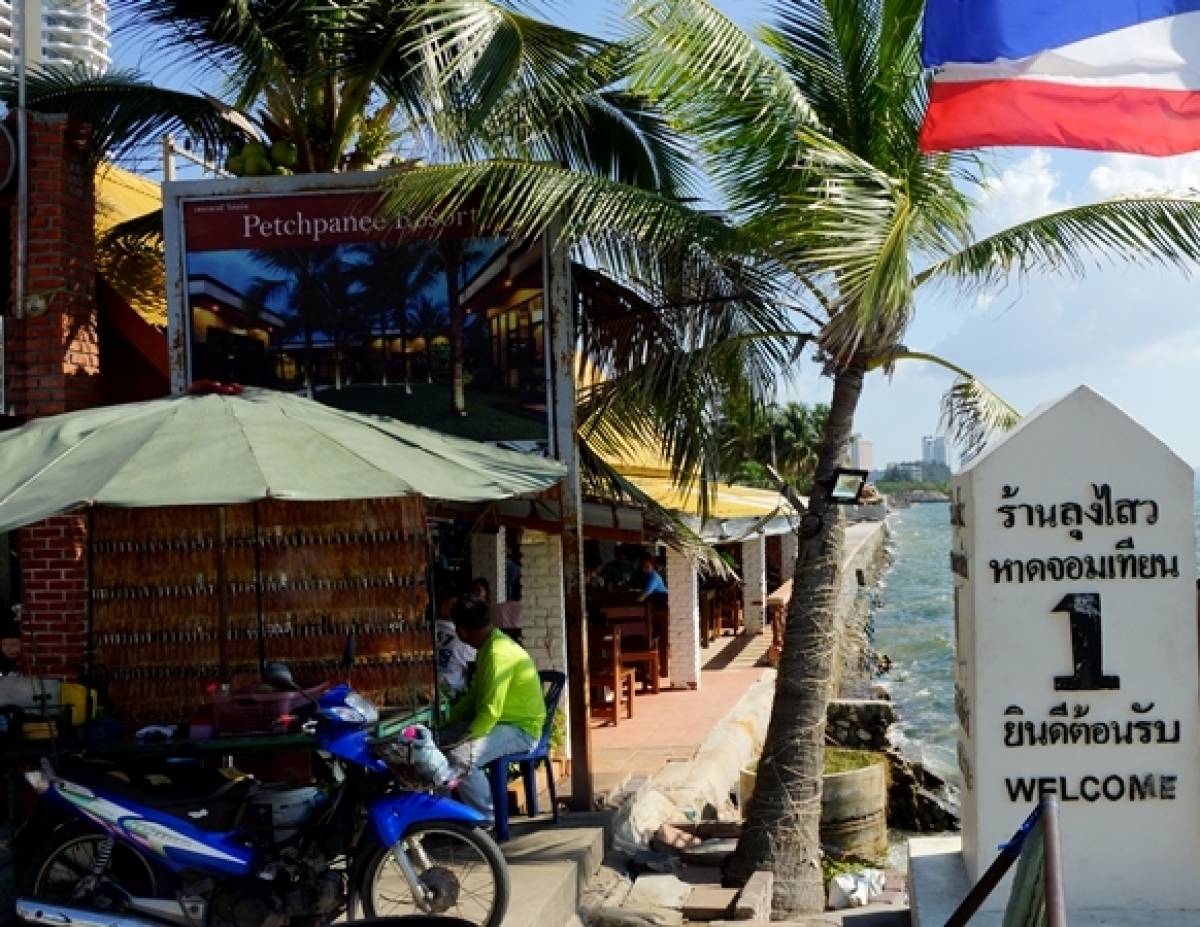 The sea crashes against the rocky shore just feet from our table at Lueng Sa Wai Seafood. Looking forward I can see down Jomtien Saineung Road that separates the six kilometers of Gulf of Thailand beach from the bars, restaurants, hotels, markets, street vendors and high rise condos. North of that is raucous Pattaya with its girlie bars, strip joints, malls, street food and high end restaurants.

Along that six km’s of Jomtien beach Lueng Sa Wai Seafood is the only restaurant right on the water. Here the road is narrower and quieter than further up the strip. The bustling tourist area has been left behind. Lueng Sa Wai’s decor is simple - heavy wooden tables and chairs. Brick pillars painted white hold up the plastic corrugated roof. The staff seem as languid as the mutt sleeping near the entrance. A waiter walks by and gives the mutt a not quite gentle kick in the face and it just chomps its chops, stretches and goes back to sleep. On our first visit we were not impressed by the staff. Lueng Sa Wai is primarly patronized by locals and foreigners who live here. English is a foreign language and I had to ask three times before I got ice. However, the food was so good that even the inattentive staff could not put us off. Farah and I ordered the Spicy Seafood with glass noodles that included squid and prawns. Squid can be like squibs of rubber, but not in this dish. Easily accessible it was easy to eat. While it said ‘spicy’ it was well within our range of hot tolerance.

We only had beer and fish cakes as this was to be just an afternoon snack. While unimpressed by the staff the food and ambiance was good enough to make us return.

Two days later we returned and ordered more food this time. We arrived about 2:00pm so the lunch crowd had gone, though it was still doing good business. It was like the staff had an attitude transplant and food came quickly and our server was quick to keep the glasses of beer topped up, and ensured the ice was equally available. The young lady, despite her lack of English, even caught some of my quips.

We ordered Morning Glory - that was cooked in garlic (mmmm) and oyster sauce- steamed clams and seafood rice. We pondered over our last dish and decided to go with the Mixed Seafood Grill - not being alert to the fact that it also included clams. So we had a lot of clams. But it was so good. The Mixed Seafood Grill also included cockles, squid, crab and shrimp, and my goodness it was fantastic. Probably the best mixed seafood grill I’ve ever had.

We lingered long over the lunch, especially when we got near the end of the meal, and enjoyed the cold beer as the sun slowly moved towards the watery horizon.

We couldn’t get contact details, the name is not even in English on the outside of the restaurant, but if you go to Jomtien, you can’t miss it. Take the public transport - the Baht Mobiles, you pay 10 baht per trip - to as far as the driver will take you, which should be a few steps from the restaurant. It is well worth the trip to the end of the beach.